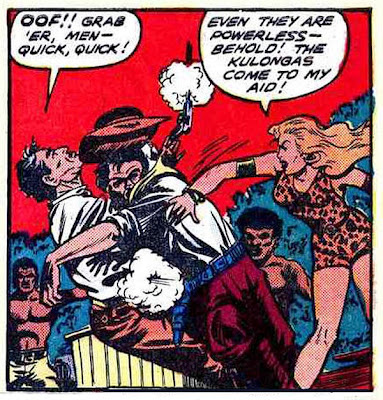 This is the third entry in our Jungle Jive theme week.

When it came to blonde queens of the jungle, Sheena was the blondest and the queenest. She was the original, created by Will Eisner, with the beauty and attributes of female villains found in Eisner’s Spirit stories, wrapped in leopard-skins; a voluptuous woman holding court over her queendom of the jungle. Do not mess with Sheena, pal, because she will knock you out, then chase you off.

I wonder about her mate, Bob. I mean...Bob. My brother’s name is Bob. Bob is a perfectly good name, but to share a throne with a queen? Bob, King of the Jungle? I don’t think so. It’s no wonder Sheena keeps Bob kind of behind, under her protection. She is stronger, smarter and she has a wicked punch. She doesn’t need Bob to take care of the innumerable evil white men who invade her corner of the jungle. Unlike Greg, who is boyfriend to Lorna the jungle girl, whom we saw Monday, Bob isn’t a male chauvinist. He likes being submissive to his queen, and I’ve said this before: maybe a lot of guys who read Sheena during the '40s wished they had a big blonde woman to submit to. Perhaps a 6’2” Sheena could tuck me under her arm and swing me through the treetops. That wouldn’t be the worst way to spend a Sunday afternoon. 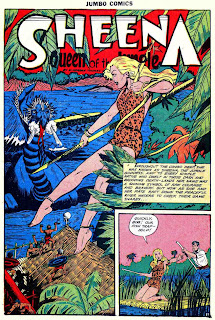 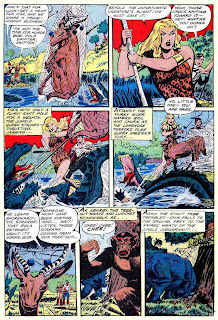 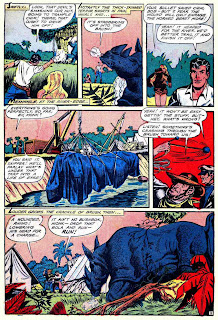 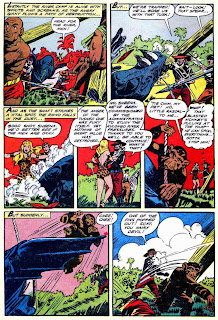 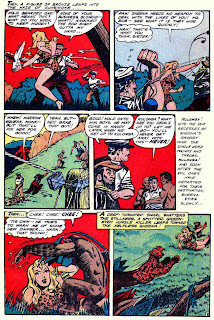 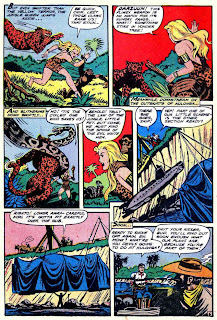 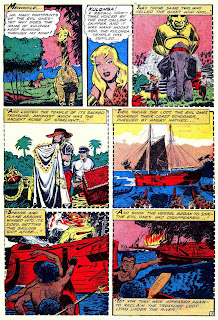 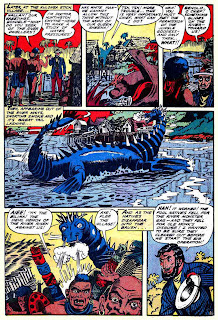 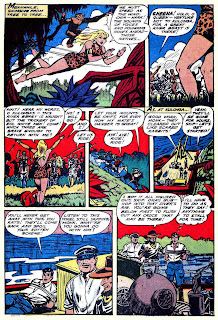 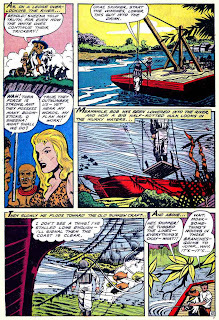 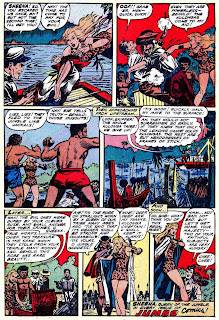 Never a dull moment in the jungle!

It's a pet peeve of mine that I've probably endless droned on about, and I know there wasn't an internet back then, but there were libraries. Alligators don't have forked tongues, nor do they look like prehistoric beasts. Same with the rhinos!

Brian, you're right, I checked the Internet!

You meant Nile Crocodile, didn't you, not alligator...?

Ouch! Well, that's embarrassing, I call somebody for not doing research and then swap alligator for crocodile!

Brian, I'm teasing you a little, which doesn't come off well in cold gray type. I had a teacher in high school who'd tell us students when he'd correct us on some minor thing, "If that's the worst mistake you make this week then you're doing well."