Number 1355: “Spending the days with Bill, and the nights with horror!” 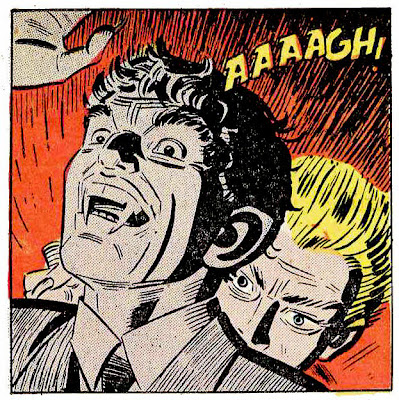 Forbidden Worlds, ACG's companion to Adventures Into the Unknown, ended its run at #34 (1954), the last issue before the Comics Code kicked in. It was replaced for three issues with Young Heroes, a more Code-friendly book, numbers 35-37. But Young Heroes didn't last, and Forbidden Worlds came back with an issue dated about a year after #34, continuing the numbering from #35. Confused? Comic books used to change their names but not their numbering (trying to get around a postal regulation for second-class mailing permits), but sometimes they were caught and had to re-number. That may be what happened with Forbidden Worlds

Okay, that's our comic book history lesson for today. Within the pages of FW #34 are a couple of stories that show a change in direction for ACG’s supernatural titles to fit into the new Code, and a last blast from their pre-Code past. The newer-styled story is “Day of Reckoning!” which is science fiction with art attributed by the Grand Comics Database to Paul Gustavson, and the catchy-titled “My Fanged and Fiendish Darling” is a werewolf story, common in ACG’s titles until the Code. It's drawn by Emil Gershwin.

“Fanged and Fiendish” is very odd. A married woman and single man share a secret; they are both able to sit at home and send their “wolf-beings” into the night to rip and tear innocent passers-by. No credible reason is given for Karen taking up such a lycanthropic lifestyle except that she is “...so lonely that maybe even terror is welcome!” It’s a crazy plot, but that wasn’t uncommon for ACG. 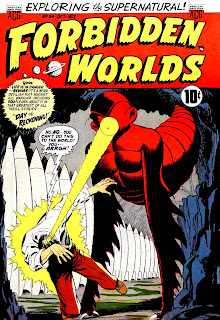 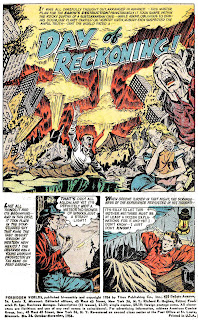 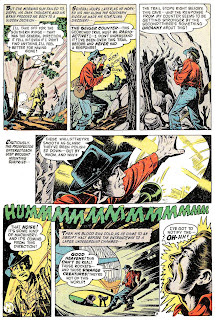 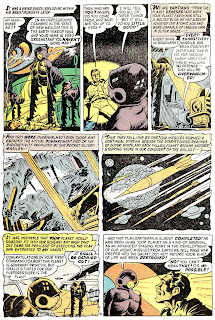 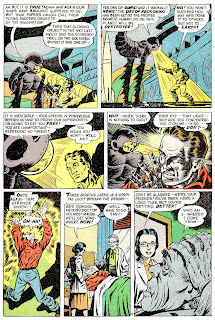 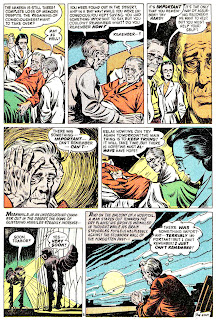 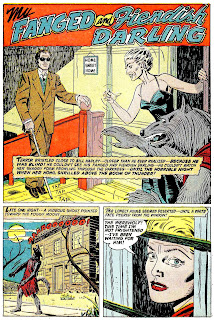 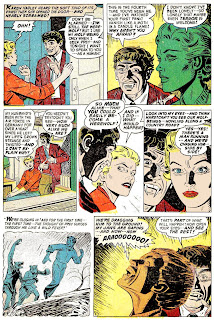 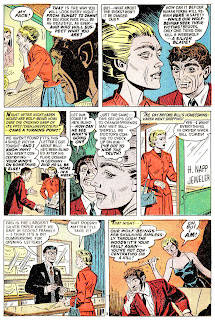 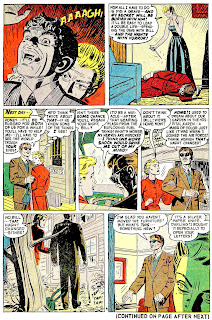 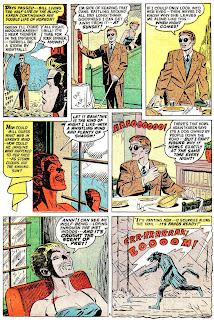 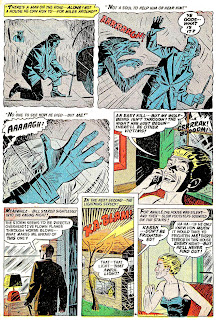 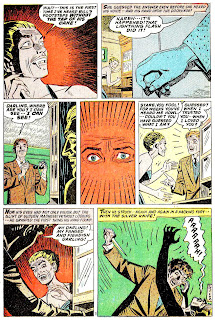 I don't have a problem, especially in short horror comics, with additions to legends, but werewolves are actually astral projections? And you just grow cartoonish fangs and gel up your hair a bit? That's a bridge too far!

Note: It's science ... if something hurts you (a flash), another one of those will cure you! So if you by mistake cut off your arm with a chainsaw, then cut the other one off, you're suddenly get both arms back!

Brian, I sent my own astral projection to scare people, but I forgot to put on my astral pants and folks laughed at me instead. (Oh, the horror!)