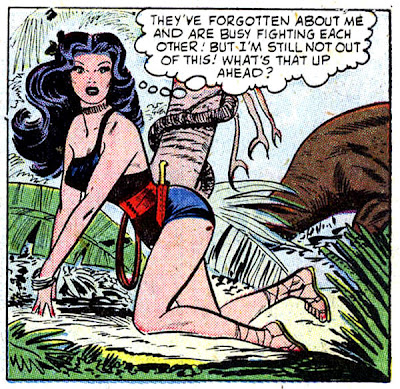 We’re in the final day of our Jungle Jive theme week. Monday we had Atlas Comics’ Lorna, today we have Atlas’ Jann.

One thing you can say about Atlas, when they did jungle girls they used some of their top artists. Werner Roth did Lorna, and Jay Scott Pike, who later went into the pin-up art field a la Gil Elvgren, did Jann. In this particular story, from Jungle Tales #2 (1954), Jann faces a jungle fever, and even runs into a dinosaur! They gave us a lot for six pages.

A bonus tale I'm including today is from the same issue, a horror/jungle hybrid tale, featuring Waku of the Bantu. Waku goes against the golden age jungle comic pattern by being an African, not some caucasian interloper. It's credited by the Atlas Tales website to Fred Kida. It has that really obnoxious coloring job on the Africans, which is a sort of purple-gray. I don’t know what the problem was, but that sort of ashen color continued on into the sixties. I remember an African-American reader calling Marvel to task for the coloring in the letter column of an issue of Sgt Fury and His Howling Commandos. 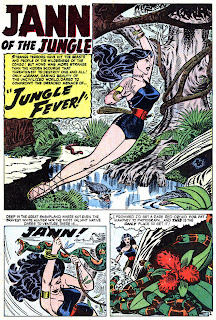 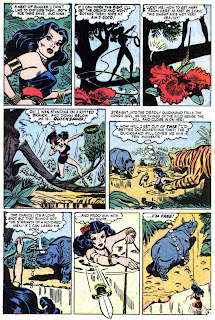 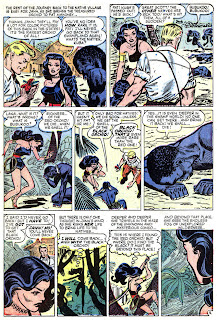 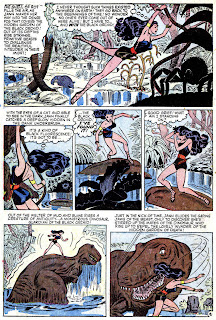 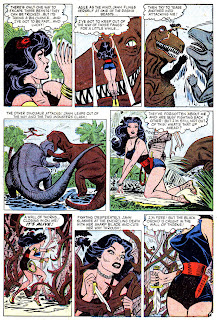 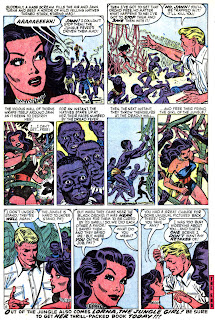 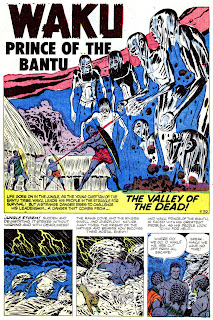 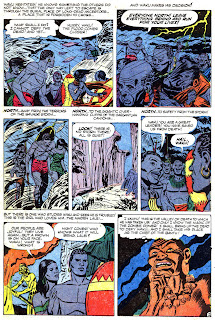 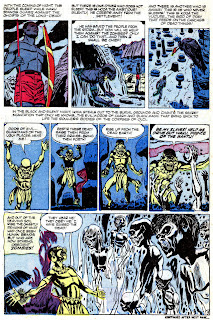 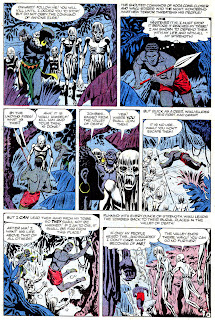 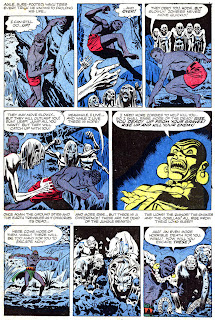 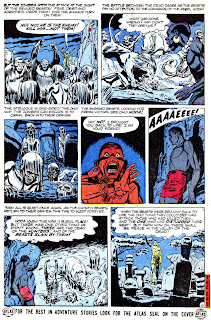 Yeah, the curative effects of the black orchid were known because… uhm….

I'd forgot about how drawings of Africans and of African-Americans used to be colored at Marvel. Granted that virtually all the Caucasians were unrealistically made just one color; but at least it weren't a color of asphyxiation!

But Marvel had enough integrity to print that letter.

I don't want to get too far afield with this discussion, Daniel, because I believe Marvel was trying to do the right thing at the time. There were no black characters in comics to speak of, and they inserted Gabe, a bugler, into the Howling Commandos. I don't know whose decision it was, because in reality the U.S. Army was segregated during World War II. Both Kirby and Lee, who had served, knew that.

As I remember the letter the writer thanked them for including a person of color, then got after them for color they used. To their credit, as you say, they printed the letter and they also changed the color scheme on Gabe.

On the plus side, though, that second story is very forward for the time, and our hero is very heroic and brave, and it's not a bad proto-super hero story with a decent twist. Colorist should have been taken out and shot, though, not just for the African Americans but for about everything in there.

The Jann story? First off, that's some of the earliest broke-back poses I've seen (not that I'm complaining), and second, how does she keep her hair so soft and bouncy in the jungle humidity?

There were always coloring tricks, I'm a huge fan of Werewolf By Night and there was an African American werewolf, but to show off the highlights, he was colored blue + black. As a kid, I was stunned when he was referred to in the text as having black fur. I just didn't get it.

Brian, I remember when I was a kid feeling the same way about Superman and the blue highlights in his hair.

I also loved Werewolf by Night, but haven't read my copies in years. I don't remember the African-American werewolf. But why not have a black werewolf? I don't remember race being any kind of impediment to being under the "curse" of lycanthropy.

Obviously Jann had a make-up and hair person who worked on her between panels.

Marvel's purple black people puzzled me as a kid, too. At the time someone claiming to know said an appropriate color wasn't available in the limited comic book palette. Which was silly, of course, because Marvel had no trouble coloring brown trees.

The other odd thing in early Marvel portrayals of African Americans was the way Steve Ditko always used to cross-hatch their faces. Just to make sure we knew they were dark-skinned, I suppose.

Ditko might've been indulging in cross-hatching because he didn't trust the colourists to get it right.

I love this blog. Pappy keep the posts coming. But, I just got a new al wiliamson book in the mail today. He's my 2nd fav artist who drew Flash Gordon, and I own all his flash work. Anyway the book I bought I was leafing through it and I noticed he drew a few of the Jann of the Jungle stories. Just had to share. As I think Williamson is a under appreciated artist.