Here’s another of my “Crime Wave” selections. You may remember a few weeks ago I told you that I had planned on introducing a new blog to show just crime comics stories, but decided I was too lazy busy to do it justice. So occasionally I'll be showing crime stories under this logo just so my plan won’t go totally to waste.

“The Jungle.” a story of a prison escape, is from Crime and Punishment #43 (1951). It’s drawn by the under-rated Robert Q. Sale, who worked in comics for a few years, and did excellent work for several companies. The Lambiek Comiclopedia gives Sale another name, Robert Q. Siegel, which I assume was his birth name. Also according to Lambiek, he died in 1962 at the very young age of 38. The story I had heard about Sale was for a time he shared studio space with Harvey Kurtzman, John Severin and Will Elder in the Charles William Harvey Studio. 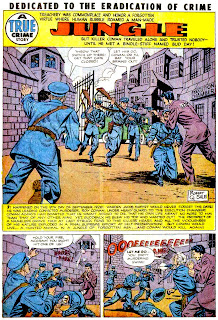 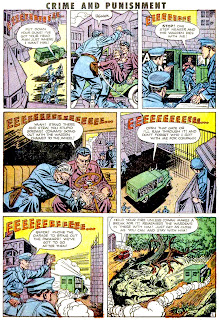 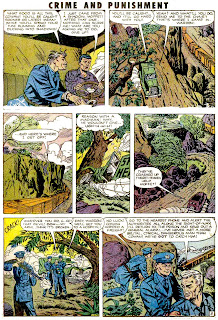 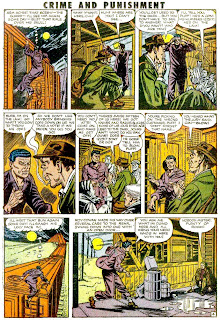 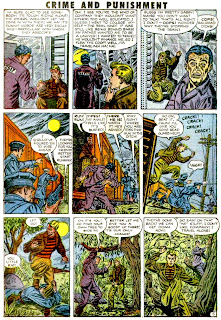 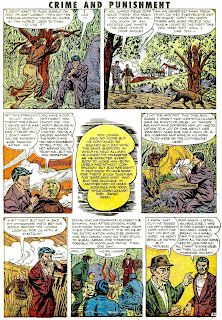 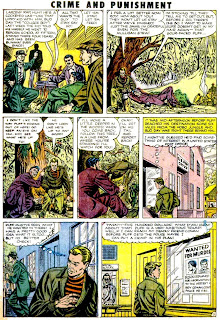 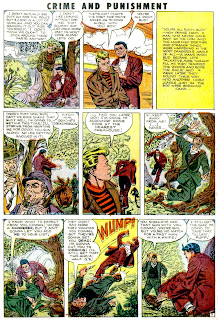 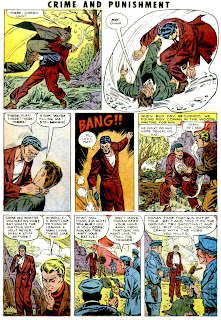 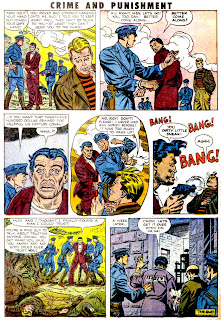 So, in the 50s, it's incredibly easy to just grab guns from cops. This guy does it twice!

I always wondered about the "true crime" credits. I've never heard a good explanation. Was everybody following a trend after the first guy did it? Did it effect sales? Was it to get around some requirements?

Knowing comics, it had to be a sales angle, but then I'd be guessing.

Well, Brian, you'd be right about the sales angle, but then as I've mentioned before "true" is a floating concept, especially in crime comics, where research was whatever the high points of a criminal's career were and exploiting them to fit into a rigid comic book format.

Crime comics had many stories featuring famous criminals like the '30s bank robbers, Dillinger, Bonnie and Clyde, Pretty Boy Floyd, etc., but if you held them next to a well-researched text like Public Enemies by Brian Burroughs (on which, at least in part, the movie of the same name is based) the comic versions would be found wanting, as much fantasy as reality (to be fair, so are the movie versions).

I like crime comics for being lurid, so sue me! The publishers of crime comics could throw around the word "true" all they wanted, but as long as we get lots of corpses and ghastly goings-on who cared what word they used to describe them?