Another look back at a favorite posting of mine, from 2012.

I am interested in artists who worked in the early days of comic books who had a substantial art career even before all-original comic books became popular. Among them was E. C. Stoner, an African-American artist who drew Phantasmo in Dell’s The Funnies. Stoner, born in 1897, was quite a bit older than many of his contemporaries in the comic book business. Like other African-Americans who worked in the industry, he drew white superheroes.

In re-reading my original posting I am a bit embarrassed by my exuberant description of how I saw the cover of Large Feature Comic #18 (1941). Sorry!

You can go to the post by clicking on the thumbnail below. 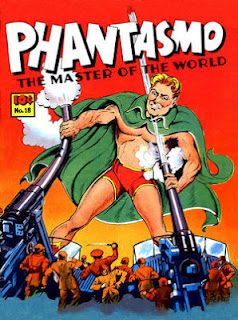 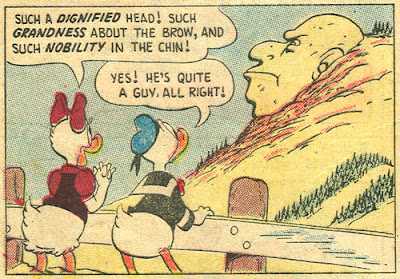 While I wait to resume Pappy's on a regular schedule, I thought I'd throw in an occasional “Pappy’s Favorites” post.* These will be posts from my archives I particularly enjoyed writing and presenting.

“Inspiration for Carl Barks...?” came about when I found three consecutive 1943 issues of Target Comics, and recognized in it one of my all-time favorite 10-page Donald Duck Stories by Carl Barks.

I tried to soft pedal it a bit, because I did not want Carl Barks fans to think I was accusing the master of stealing an idea. You can read the original 2012 post in Pappy’s Number 1236.

In the post I give a couple of ideas of what might have happened between the original 3-part story in Target, and the Donald Duck story from 1957.

I thought there would be more made of it. This is one of those stories that I expected to get a reaction, and except for a couple of comments I think the rest of fandom either didn't see it or didn’t care. In those days I sometimes had expectations of a reaction, and invariably it never happened as I imagined. After a while I learned to just trust my instincts on what to post, and not fret about what my imagination conjured up as a reader response.

It struck me when re-reading the original post that I might have been a johnny-come-lately. Perhaps the subject of the similarities between the stories had been published somewhere before, and I only thought I was the first to bring it up. If you know, tell me.

*To paraphrase the old question, "How can you miss me if I won’t go away?"