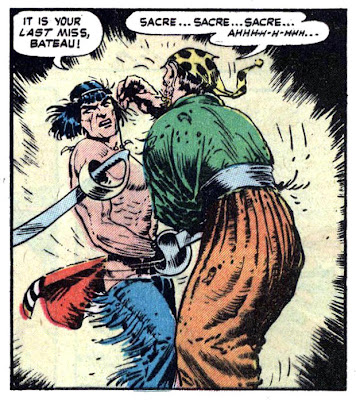 The world lost a great artist when Frank Frazetta died. For most people his work probably represents heroic fantasy, but a very important aspect of his artistic development was his early work in comic books.

Frazetta did these Dan Brand and Tipi stories for The Durango Kid comic book from ME in 1950 and ’51. His stories are usually why collectors want these comics. The artwork in the rest of the comic is well done, but just doesn't come up to Frazetta’s level. That would have been true in any comics where his work appeared. 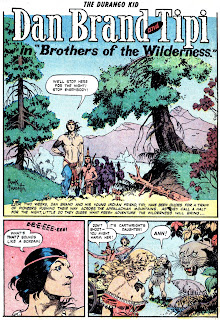 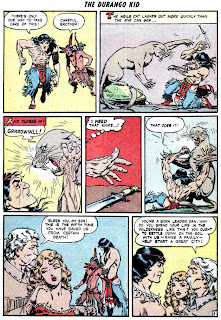 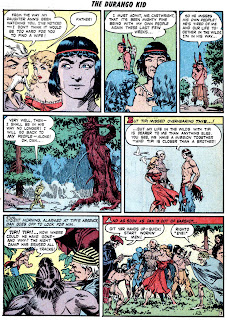 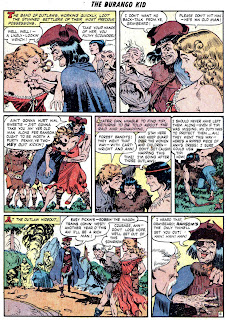 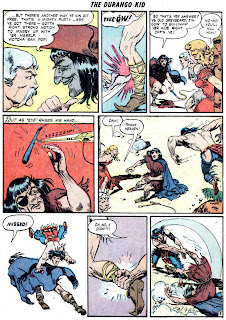 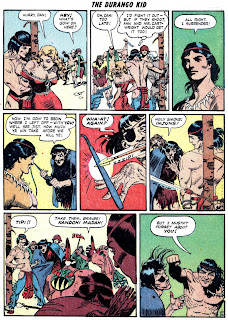 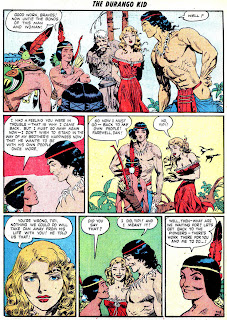 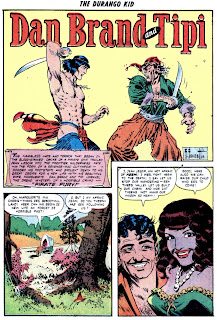 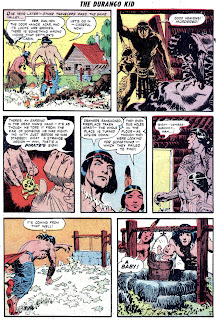 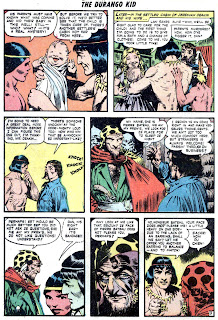 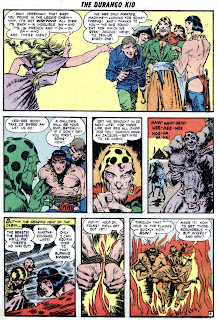 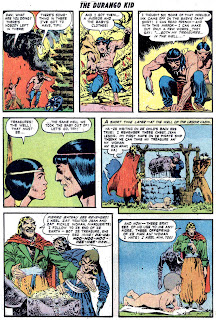 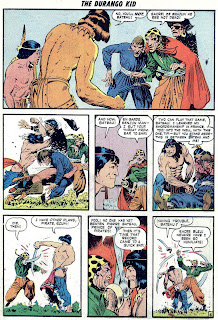 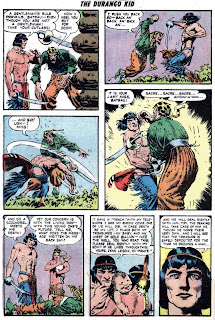 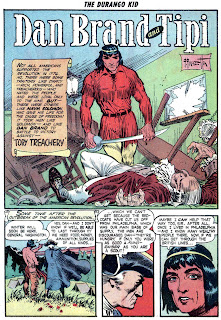 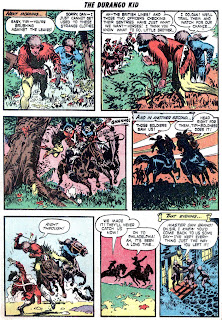 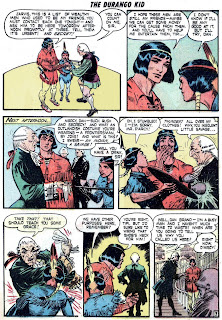 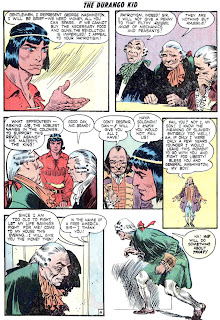 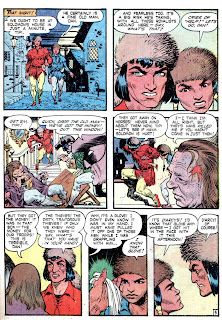 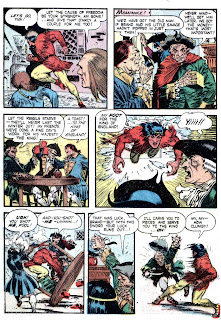 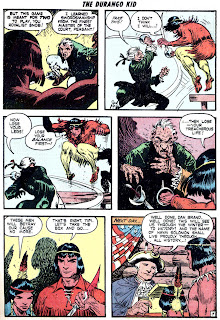 **********
'Taint the Meat...It's the Humanity: Fantagraphics does Jack Davis Tales From the Crypt stories 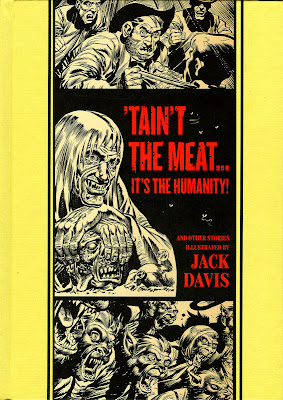 I received the Fantagraphics volume of Jack Davis stories from Tales from the Crypt pictured above. I have several copies of these classic EC stories in other formats, including the original comic books of the fifties, but I always like seeing them. When I saw the book, though, I wondered that for the purposes of my review what would be my hook…what could I do to make relevant this new volume of stories, all of which have been reprinted several times in the past?

The answer was a quote on the back cover. George Romero, whose Night of the Living Dead introduced the flesh-eating living dead to modern horror, is quoted as saying, “I think a great part of my aesthetic in the genre was born out of EC rather than movies.” Couple this with the book arriving in my mailbox a day after the season finale of the hit TV show, The Walking Dead, and there was my hook. (Or would that be meathook?)

A line can be drawn from EC horror comics to The Walking Dead (which was a horror comic before it was a successful television series). Panels like these were seeds sown in the minds of others, eventually leading to to today’s entertainment. 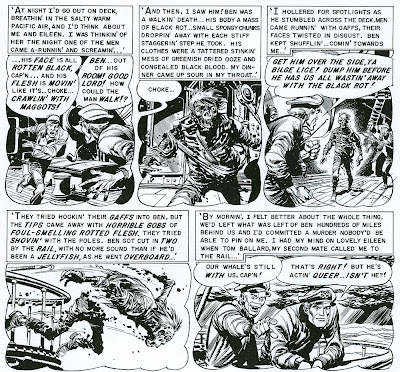 Not every horror story is gruesome, and so it is with this volume. The subject matter is varied, the shocks well placed (usually in the last panel). The progression of stories shows Davis’ own progression as an artist. At the demise of EC in 1955 Davis was probably better known for his Mad artwork, and that, more than his horror stories, brought him eventually to huge success as an artist. As a matter of fact, Davis had some trouble with horror comics, or at least he claimed that in a panel discussion I attended with Kurtzman and Davis in San Diego in the mid-‘80s. 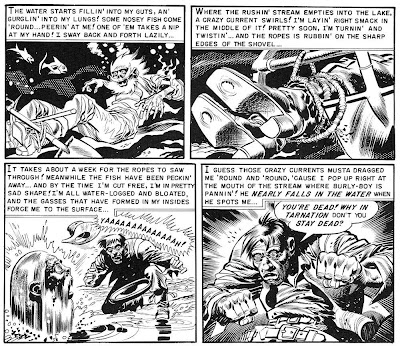 In recalling the furor over horror comics and eventual censorship Davis said, “I used to lie awake at night and wonder, did I cause all of this?” For any misgivings, though, Davis made his original mark in the humble comic book industry, drawing both horror and humor, and was propelled to world fame as an artist.

So far in this series from Fantagraphics there have been volumes by Harvey Kurtzman, Wallace Wood and Al Williamson, with Johnny Craig and Al Feldstein coming soon. I'd love to see a volume of stories by “Ghastly” Graham Ingels, who along with Davis, kept a lot of kids like young George Romero shivering under the covers when the lights went out.

The volume is well produced. The stories are reproduced in black and white so we can see every line Davis drew. The binding is permanent and the heavy paper stock won’t disintegrate on your book shelf. It’s available from your local comic book store, or from Amazon.com, Bud Plant or the publisher, Fantagraphics Books.

I wouldn’t be me if I didn’t point out what I found lacking. The issue numbers of the individual comics are listed in near-microscopic type on the copyright page. (Book designers, please have mercy on those of us with aging eyeballs). It would have been nice to see those issue numbers listed either in the table of contents or in a line on the first page of each story. And why not show Davis' TFTC covers, even in black and white? Other than those quibbles, this book gets a high recommendation from me.

I bought the Whole White Indian paperback. The art is a bit crudly reproduced. As the story in my Frazetta Hardcover with the buck rogers cover was much better printed. Same was true about the thunda comic. Clearer if not more vibrant colors than the Dark Horse reprint, and blown up to Portfolio sized. Love frazzetas work. Shame he didn't do more complete comics.