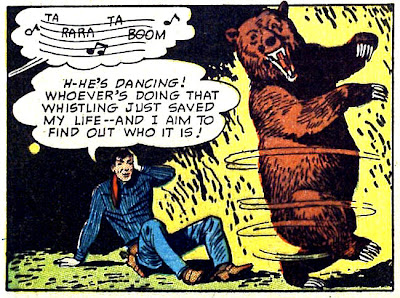 Allan “Rocky” Lane was a Republic Pictures B-Western star of the forties and fifties, popular enough to have his own comic book from Fawcett. Lane had appearances in television, and then went into voiceover work, including his starring role as the voice of “the famous Mr. Ed”! (I can clearly remember Lane’s voice and his “Hel-lo, Willlll-bur.”)

Rocky was popular enough to have some advertising tie-ins. Here's one from 1951. 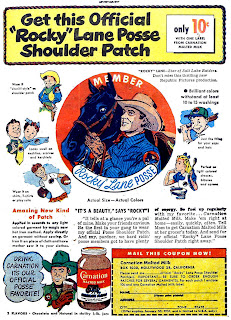 This comic book story, from Rocky Lane Western #15 (1950), is part comedy by adding a dancing bear. I had one of those “What th—?” moments when I read the explanation for why the bear lived through Rocky emptying his guns at him, but go ahead and read the story and we’ll talk a bit more of it after the last page.

The Grand Comics Database lists Ralph Carlson as artist. Issue #15 is not specifically indexed, but a note on another issue says that Carlson’s tell is his “lively horses” and their outstretched front legs. In this story that happens in panel 6 of page 7. 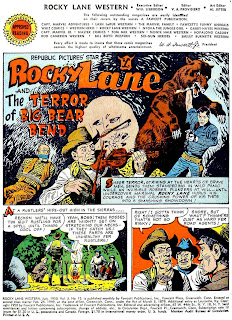 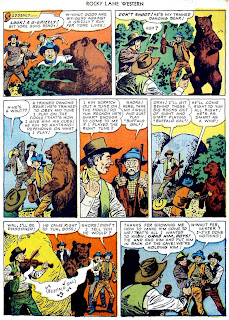 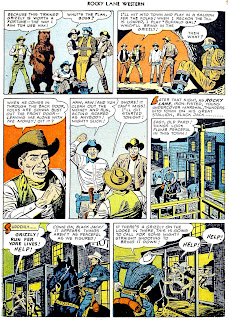 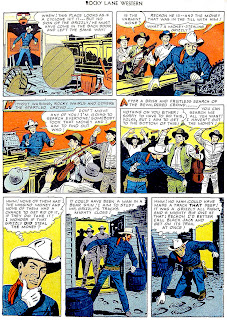 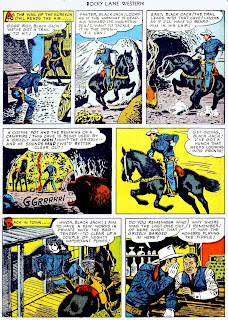 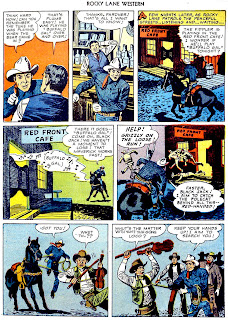 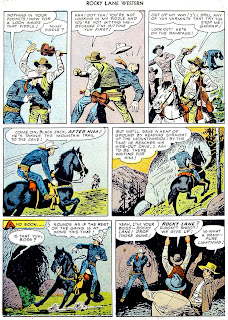 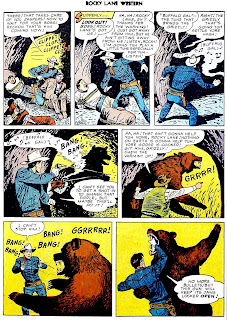 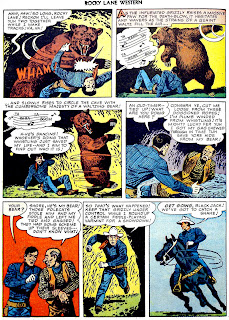 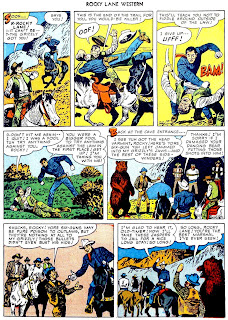 Rocky emptied his six-guns at the bear, yet it lived through the barrage. Rocky then apologized to the owner, who said that Rocky’s bullets didn't even “bust his hide.” I find that incredible, but maybe there was a delayed reaction and the bear dropped dead later. Based on this little cartoony “factoid” drawn by George Papp for Big Shot Comics #6 in 1940, a grizzly bear can run a hundred yards with a bullet in its heart. And of course I always believe everything presented as fact in a comic book. 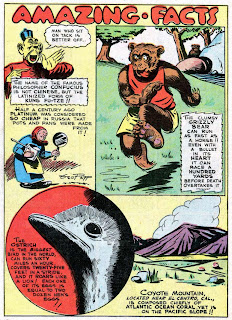 Those who actually say or think “What th—?” are true lovers — or perhaps just true victims — of comic books. (I first encountered “What th—?” as a kid reading Fieffer's GCBH.)

That bear is highly anomalous. On the one hand, it seems to have Kryptonian flesh; on the other is seems to have nearly useless claws.

It's great stuff. I get it some new information through your blog. Its really helpful to me.
Estetik

Its importint 2 alwys bleev EVRYTHING cartunes tell u Pappy! Like in our new podcast ( http://TAGamericast.com ) , we xplane THA TRUTH bout how we write all our badass songs Yay! OMG We luv u Pappy!❤♥

Alicia, thanks for the link. You two are very entertaining.

Of course I believe in cartoons. They are reality. Everything else -- and I mean everything -- is illusion.

Daniel, I even say "What th--!" in my everyday life. (No WTF for me!)
Being a comic book guy I always visualize a speech balloon over my head when I'm talking.

estetik, I try to edit myself, hold back on being too pedantic, but if you're learning something then I must be doing something right.