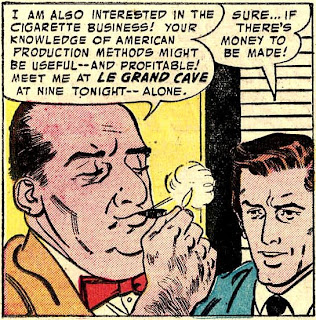 
Case of the Counterfeit Cigs

Yes, folks, there was a time when cigarette smoking was not viewed with utter disdain and loathing. For my international readers, in America smoking is still a legal activity, up to a point. When I started smoking in 1967 I could go anywhere, walk into a retail establishment, store or restaurant, and be able to pull out a cigarette and start puffing away. That began to change, and by the time I quit in 1977 the road to pariahdom for smokers was being paved with clean air ordinances, health warnings, and the dirty looks of passersby.

When I see working folks taking a smoke break, outside under awnings or in doorways as it rains or snows, I cringe. I remember my own cigarette jones very well.

I have only one word for the miserable huddled masses, having to go outdoors to puff: QUIT. The writing on the wall, or should I say the smoke signals, tell you that society has decreed that in the social pecking order smokers are only slightly above criminals.

This story is from DC Comics' Gang Busters #51, a Comics Code-approved story from 1956. In "The Case of the Counterfeit Cigarettes" the fictional cigarette company is not the villain, but the innocent victim of counterfeiting.

By coincidence, the Vanity Fair magazine web site currently has an article on North Korea's government sanctioned program of counterfeiting, both U.S. currency (called supernotes) and cigarettes. You can read the article here. 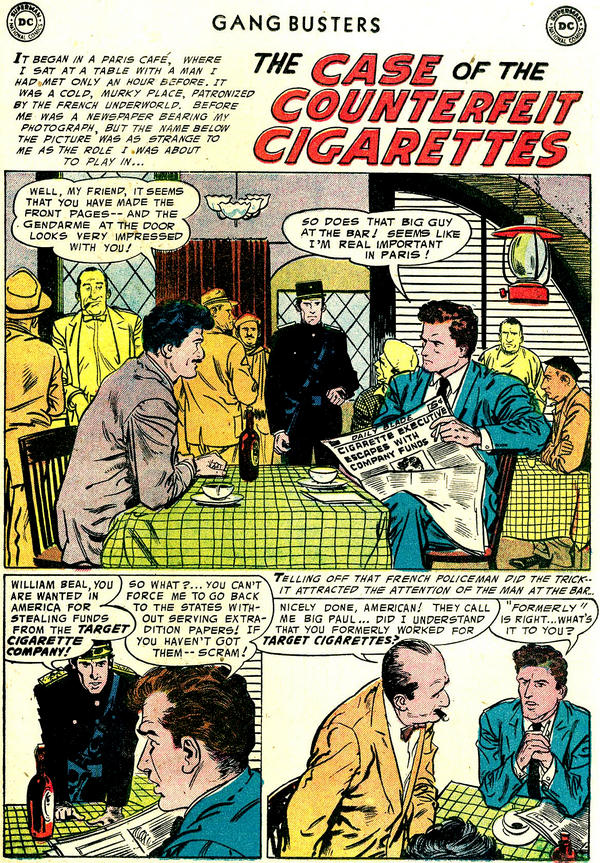 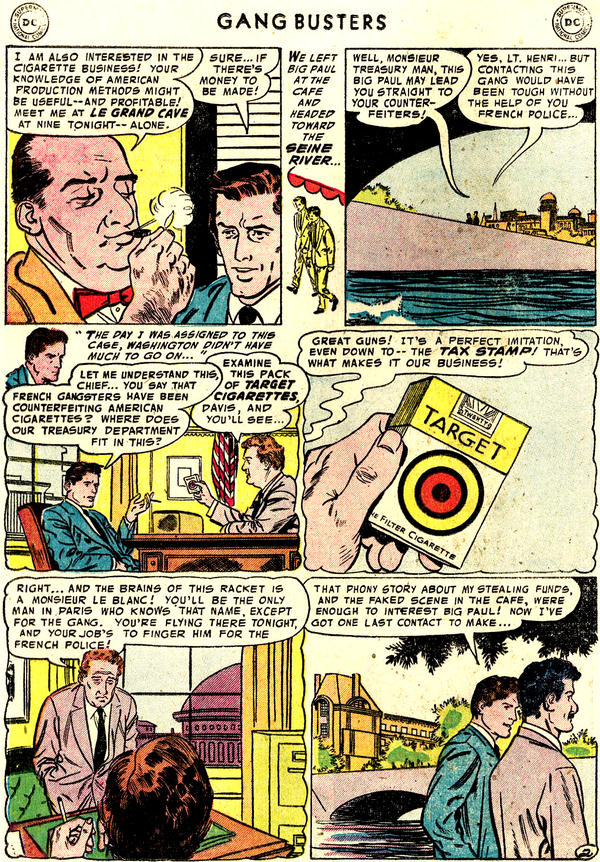 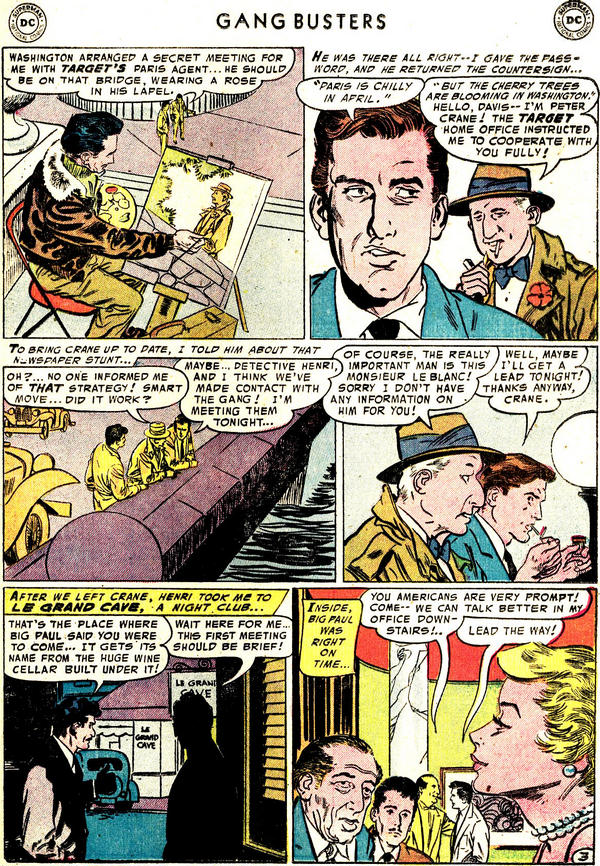 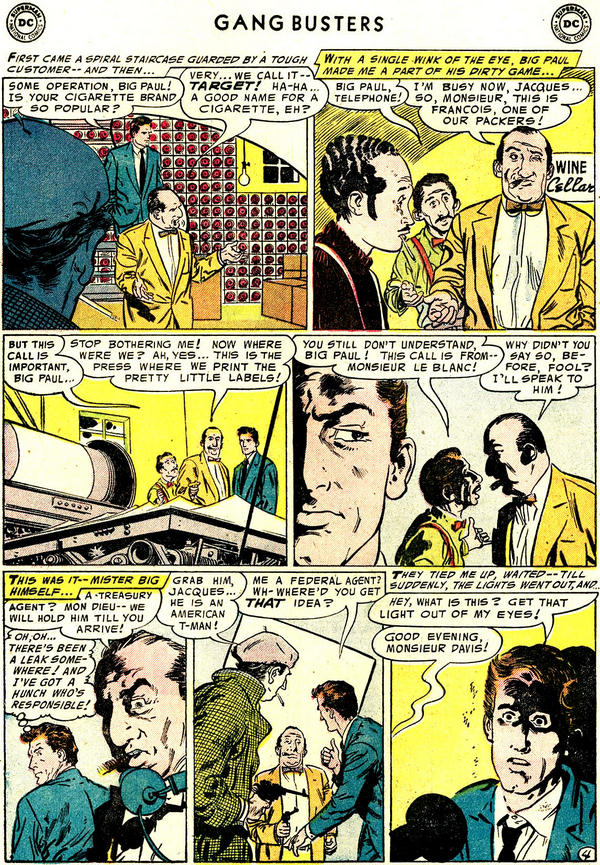 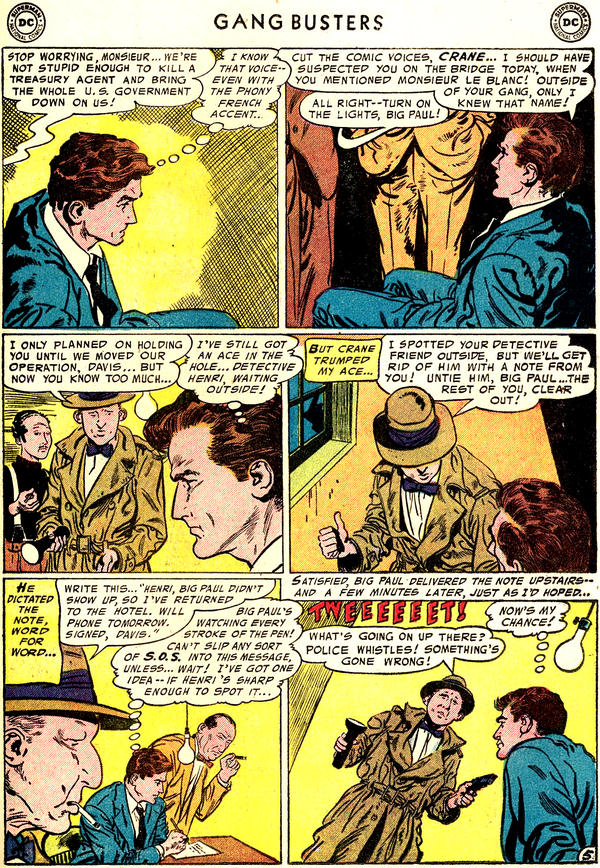 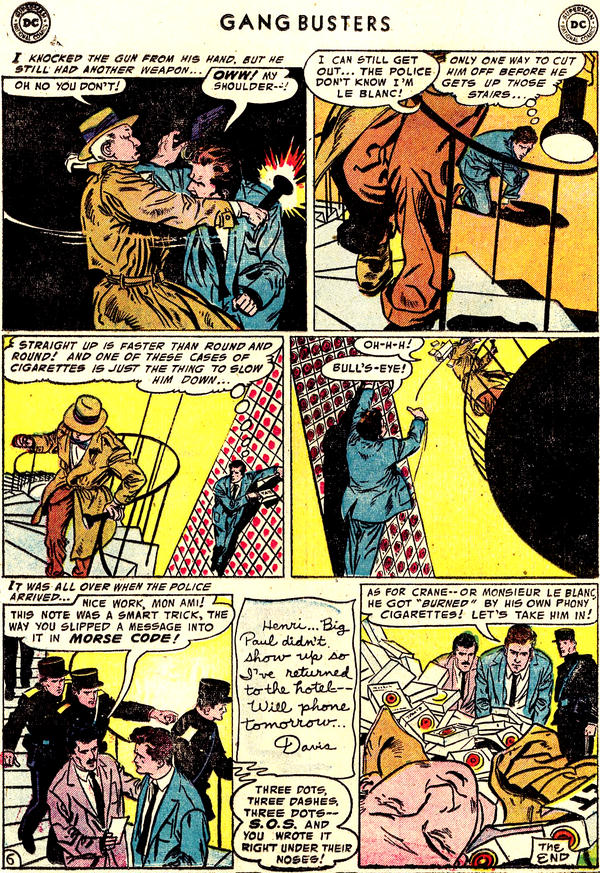 That one was a lot of fun.

Holy cow!! Early Drucker! Normally I would be all over the odd story subject, but Drucker trumps even that in my aesthetic. Thanks, Pap!

PS: Somehow I failed to mention how much young Mort was obviously influenced by Alex Toth in this story. You can't see it in his more recent work (perhaps because the nature of Mad's stories/features require him to approach the art completely differently) but it's obvious here. Fascinating.

And look at how different all those faces are!! God, I wish Mort had done more comics like this. Just gorgeous. Again, thank you for this interesting piece of funnybook history.

Mort Drucker is one of those artists you spot instantly, and I'm always happy to see his comic book work. He has a gift for drawing faces, as is evidenced for over fifty years by his Mad satires.

Love the the first panel at the top of page 3 - while the good guys are talking an artist is painting a picture of someone watching them, which turns out to be Paul Crane, one of the bad guys. You just don't get foreshadowing enough in comic books.