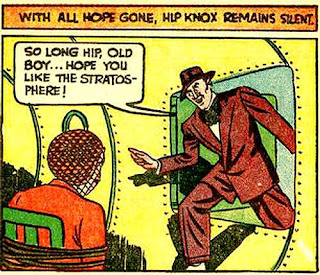 
Bernarr Macfadden was a publisher in the first half of the Twentieth Century, made rich by a newspaper called The New York Graphic, and magazines like Physical Culture. Depending on whose version of the story you believe, Macfadden was also a rival of Amazing Stories publisher Hugo Gernsback, who forced Gernsback into bankruptcy. Online biographies of Gernsback say that the bankruptcy was orchestrated by Gernsback himself, who was quite a sharpy at business.

I was amused when I saw this strip, "Hip Knox, the Super Hypnotist" from Superworld Comics#3, 1940, published by Hugo Gernsback. It features a villain called Macfadden! Hip Knox is a hypnotist in the Mandrake-style, who apparently has a supernatural ability to hypnotize anything living. In this breathless adventure he's shot into space by Macfadden. Macfadden could have handled him gangster-style and had him shot, but in pulp magazines, comic books and movie serials the bad guy gives the good guy ample time to figure his way out of an elaborate death trap. It gives Hip Knox the chance for revenge by hypnotizing Macfadden into thinking he's a mermaid. Honest, guys, I couldn't make this stuff up.

Artwork is by Jack Alderman. He went on to draw crime comics for Charles Biro at Crime Does Not Pay, and supposedly late in his career drew Tweety and Sylvester for Dell Comics. And that is all I know about Jack Alderman. We've featured him before in a story of Burke and Hare, the infamous grave robbers and murderers. 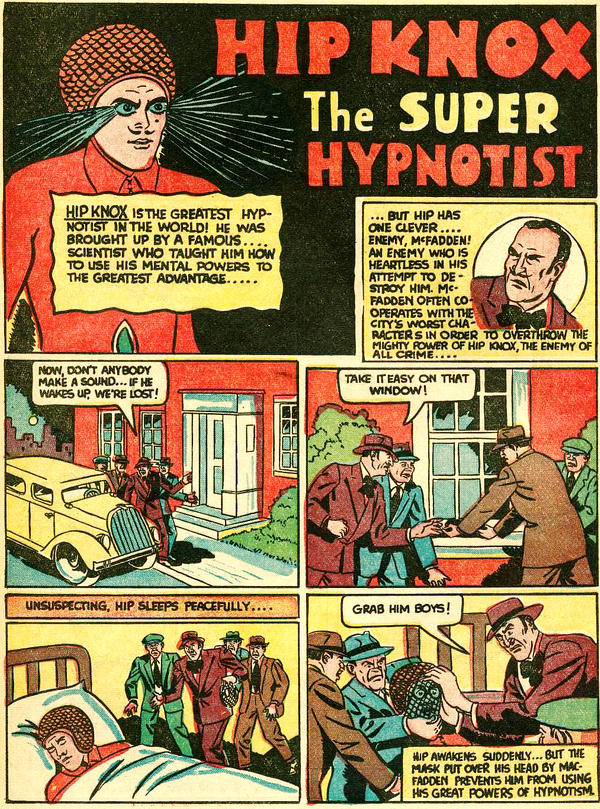 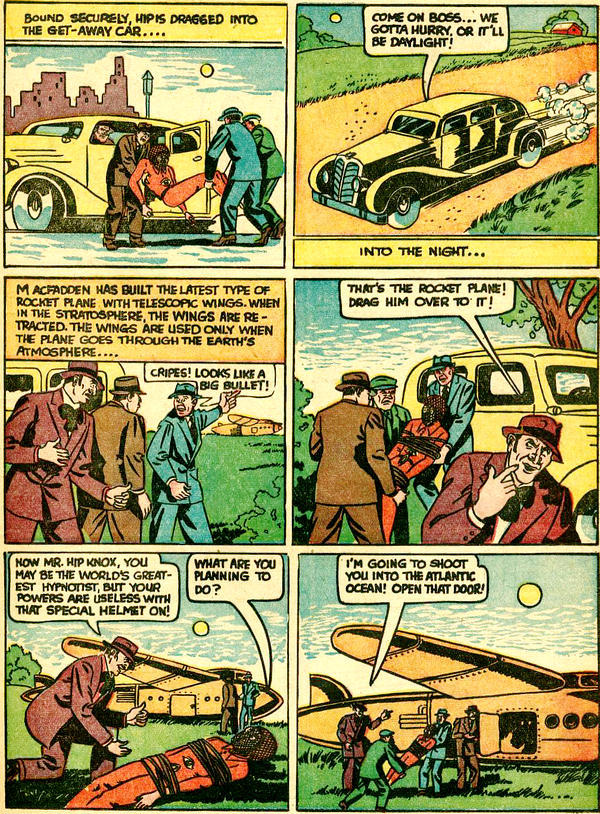 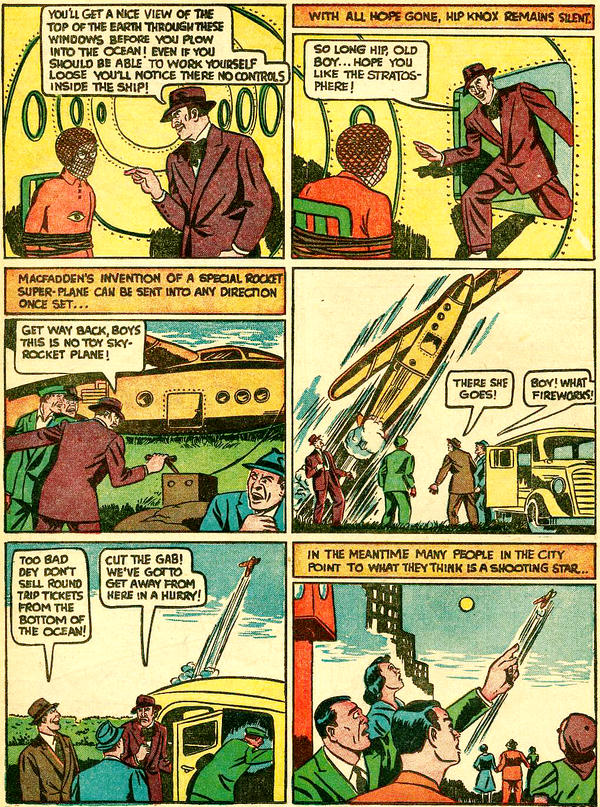 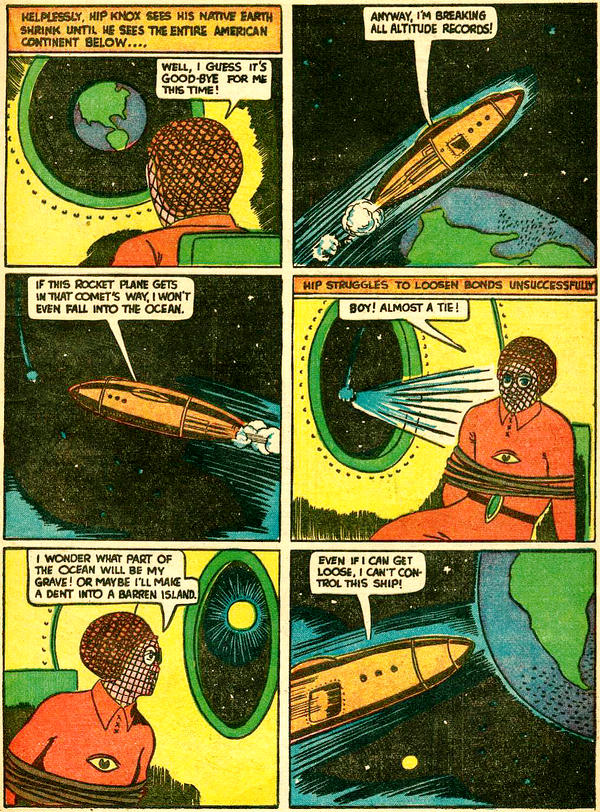 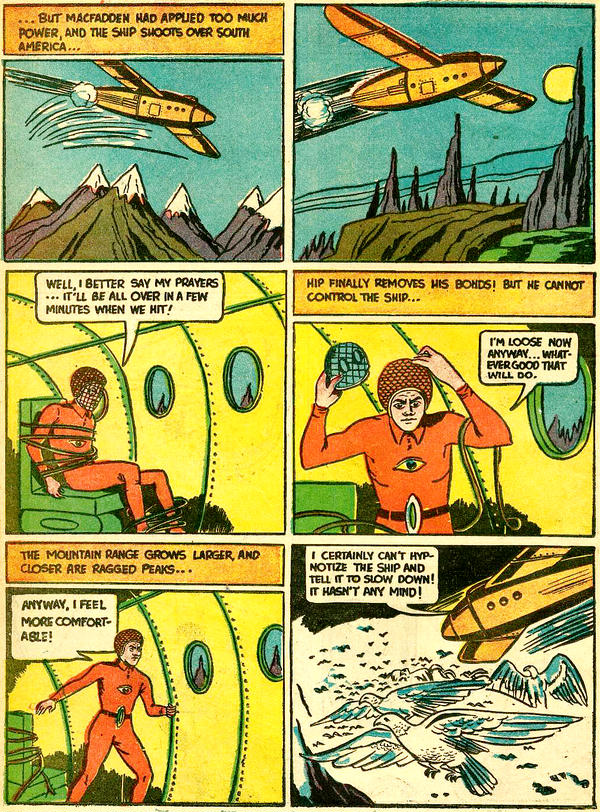 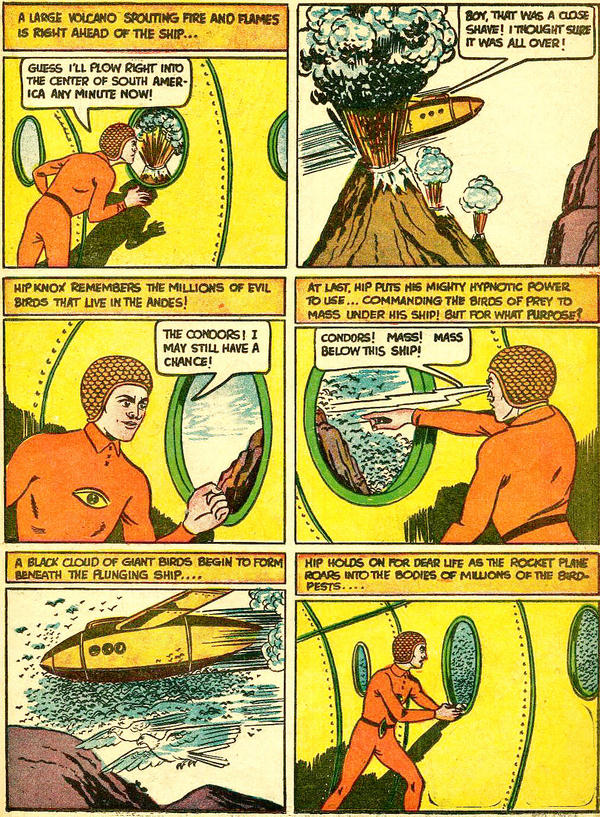 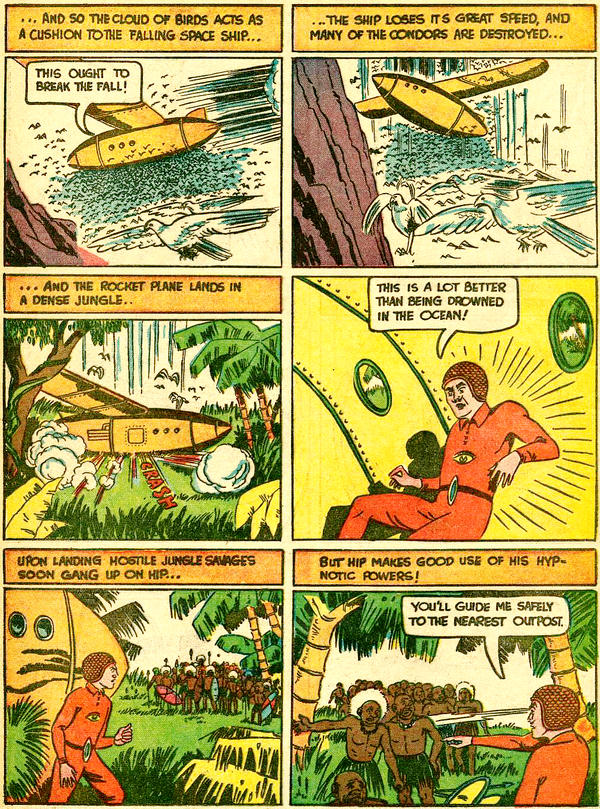 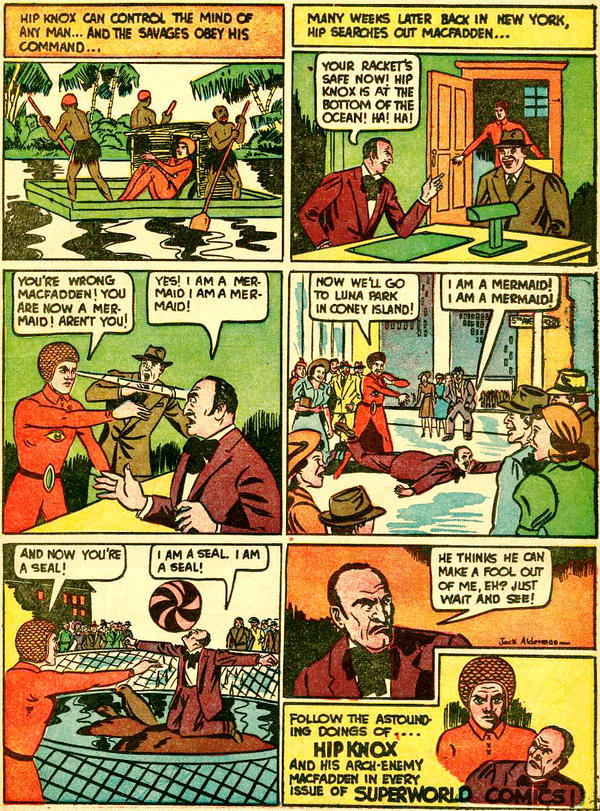 I think McFadden deserves a second shot at villainy, perhaps on Batman: The Brave And The Bold.

But his perverted, V-shaped moustache should span a distance of six feet and deliver crippling karate chops to unwary foes.

And be capable flapping furiously, granting him the power of flight.

He would merit at least an opening cameo, where his revenge on Sea World would be thwarted by Batman and Bwana Beast.

Why does Hip have a symbolic vagina on his crotch?

What I want to know is what does Hip have against the poor condors? No wonder they became an endangered species.

What's that thing on Hip's head? Looks like a crash helmet.

Love this blog, Pappy. Since I discovered it a few months ago, it's the first thing I check when I go online.

I suspect that crash helmet is supposed to be a turban, or at least artist Jack Alderman's idea of a turban.

It's gotta be tough living up to a name like Hip. I mean, you've gotta look pretty cool to call yourself Hip. Maybe Hip was trying to start a fad with the symbolic vagina.

For more information on Hugo Gernsback check out a new biography available on Amazon.

The document was found by me when we closed down Gernsback Publications in 2003. It was an old ms that I edited and produced as a book.

Follow the link and you can go to the book and thanks to Amazon’s “look inside” feature, you can even get an idea of what it covers.

Hope you find it interesting.


Somewheres among stored materials is an original Gernsback Comic Book. Now I'm gonna have to look it up.

If you need more info about Hugo, you can contact me at lartronics@aol.com