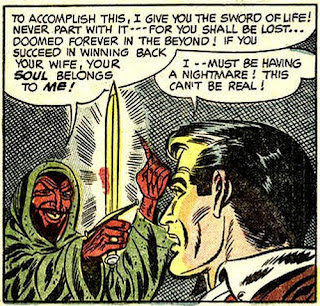 
After writing a review of Craig Yoe's Secret Identity, The Fetish Art of Superman's Co-creator, Joe Shuster I did a little research. Since Shuster did the illustrations for the Nights of Horror booklets that caused such a stir in 1954, I looked at some other work he did that year. Or should I say, didn't do. I have a couple of strips signed by Joe Shuster for Charlton Comics. I scanned these stories from 1954, "Secrets Of the Box" from Strange Stories of Suspense #22 and "Quest of the Beyond" from This Magazine Is Haunted #20. They're inked by Ray Osrin, but although the top signature says Joe Shuster, it appears to me that Shuster hired a ghost to do the pencils. None of the artwork in these strips looks anything like the Joe Shuster artwork for Nights of Horror, or for other work I associate with him, early Superman or even 1948's Funnyman. It doesn't make much sense for him to do unsigned artwork for Nights of Horror and make it look like the Superman creator Joe Shuster, and then sign artwork for Charlton that obviously wasn't by him. But that's what looks like happened.

I also posted an unsigned strip in Pappy's #331 called "Mental Wizard" from Charlton's The Thing #16, which is obviously by the same artist. Check out the bearded character, who looks like Smirnov in "The Secret In the Box."

Stay for one more comment after you read the second story. 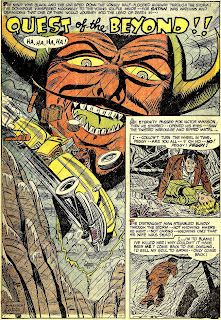 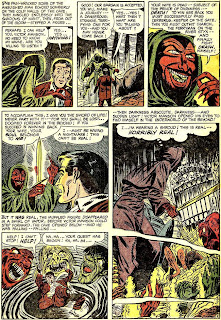 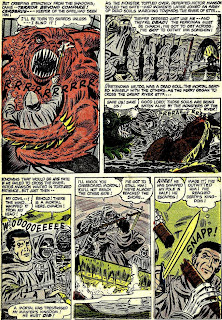 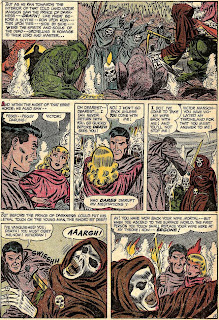 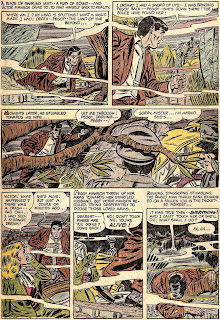 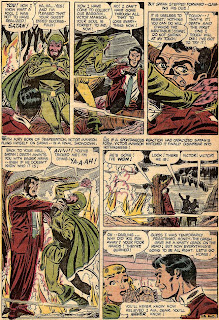 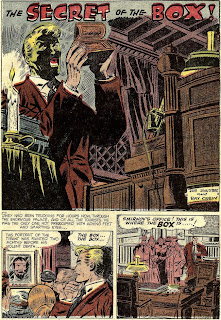 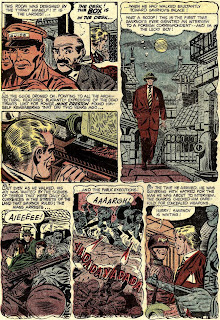 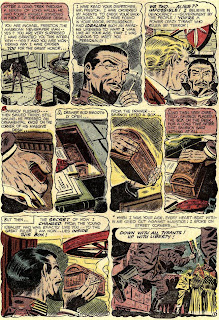 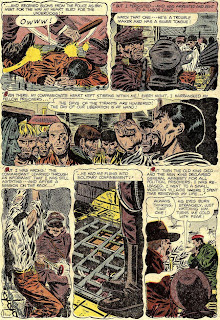 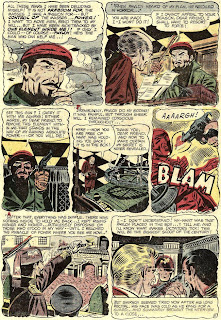 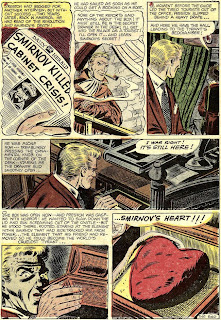 Do you think that last panel is goofy? That's not a human heart, but a Valentine heart. Since it's supposed to be a human heart my thought is that being 1954, with loud criticism of horror comics at an ear-splitting level, somebody in charge at Charlton said, "Better soft pedal that last panel. Put in something that is supposed to be a human heart but not so gory." I don't know that's what happened, but I can't figure it out otherwise.

Wow! can't wait to hear what Craig says but I see no trace of Shuster here. In fact, the whole thing has a definite Joe Kubert look (although I can tell Kubert never touched it). Not familiar with the inker. Was he perhaps Kubert-influenced? Even the basic layouts look nothing like Joe Shuster. Weird! Great post!

Steve, besides the work he did on these strips, all I know of inker Ray Osrin is that he inked the first graphic novel in 1950, It Rhymes With Lust, over Matt Baker's pencils.

At first I thought Shuster's ghost penciler could be Seymour Moskowitz, but I don't want to stick my neck out too far on that guess.

The situation this reminds me of is when Bob Kane hired Sheldon Moldoff to ghost Batman.

On a different note, do you have any issues of Funnyman that you could post?

Compare “Quest of the Beyond” with “Journey to Chaos” (reproduced over at the Horrors of It All back in Mid May).

Daniel [oeconomist.com] said...
This comment has been removed by the author.
5:07 PM

Honestly, I'm pretty sure that I do see Shuster here, especially in the second story. More specifically, it is as if Shuster began the pencils for the story, and then someone extensively added detail. If one imagines paring back that detail, one reachs a point where things such as the shapes of heads are distinctively in his style.

Chuck, I have a Funnyman story scheduled for mid-September.

Oeconomist, I agree with you on the similarity of the stories, and there are a lot of similar stories in horror comics. Some people in that low-paying industry had a motto, swipe like hell! Many writers even stole from themselves. Tweak a script and it's another sale to another publisher.

Just coming into this late in the game. I tried to track Seymour Moskowitz's output,1953-55 with the late Steve Whitaker.

Steve was the one who spotted that the two CLASSICS ILLUSTRATED issues signed by Moskowitz, "King of the Khyber Rifles" and "Sherlock Holmes"
were in part ghosted by Steve Ditko.

These issues appeared early in 1953. Both Ditko and Moskowitz turn up at Charlton at the beginning of 1954 just as Bob Forgione exits. There is very obvious collaboration between the two artists particularly Ditko again helping out Moskowitz in spots.

Moskowitz may be someone who got jobs and farmed out the work to others. There is a recognizable somewhat amateurish and grotesque style, but it is very inconsistent.

As he picks up more work in 1954, doing stories for Atlas, another penciller and/or inker seem to be in the mix.

Confoundingly there are stories at Atlas in 1955 signed by "Kubert and Moskowitz" that are mostly Joe Kubert rough pencils obliterated by hasty Moskowitz inking.

Mike Vassalo showed Kubert these stories and Kubert didn't remember even doing them or who had finished them.

Moskowitz is a bit of a mystery. I think he and Ditko were assistants to Bob Forgione in 1953. Forgione himself worked as Jerry Robinson's assistant for a period.

Intriguingly there are bits and pieces of undiscovered Ditko in 1953 underneath Moskowitz and Forgione, if you know how to look for them.

Mik said...
This comment has been removed by the author.
9:51 AM