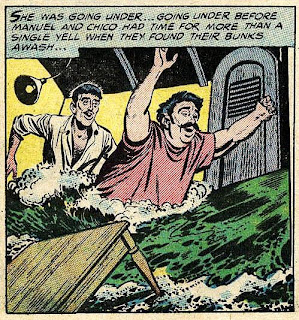 
End of the line


"End Of the Line," is a prophetic title for this story from Adventures Into the Unknown #61, January-February 1955. It was the last issue of that title before the Comics Code took effect. It was also the last story of the issue, so planned or not, it became a swansong to an era free of censorship, if not of controversy.

For several preceding issues, and obviously before ACG signed up for the Code, there had been talk in editor Richard E. Hughes's letter column, "Let's Talk It Over," asking readers if they wanted to see more "shock" stories. "Shock" in this case meant EC-style, non-supernatural horror stories. Adventures Into the Unknown was proud that it had been the first of the supernatural titles, and editor Hughes must've worn out his rotater cuff patting himself on the back touting the comic's excellence. Still, readers were asking for another kind of story and Hughes felt he must poll his readers.

A few months later in his column, now under the Code, editor Hughes was telling his readers that "some publishers" dragged the whole industry into areas which caused a public uproar and the need for the Comics Code. But ACG had pioneered the supernatural comic, had published dozens of stories of monsters and mayhem that added to the outcry. Except for going all out for grue and gore like some publishers, Hughes really hadn't much room to talk. 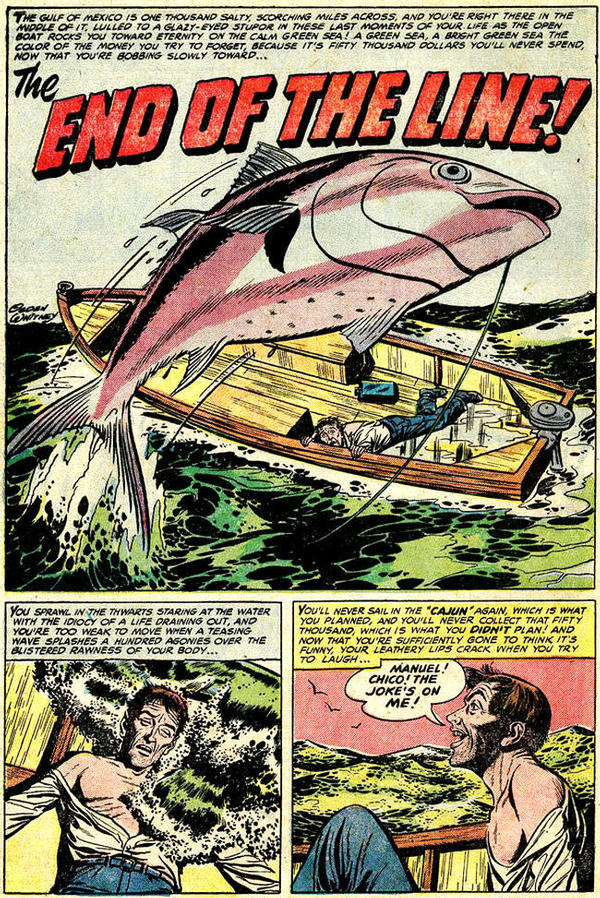 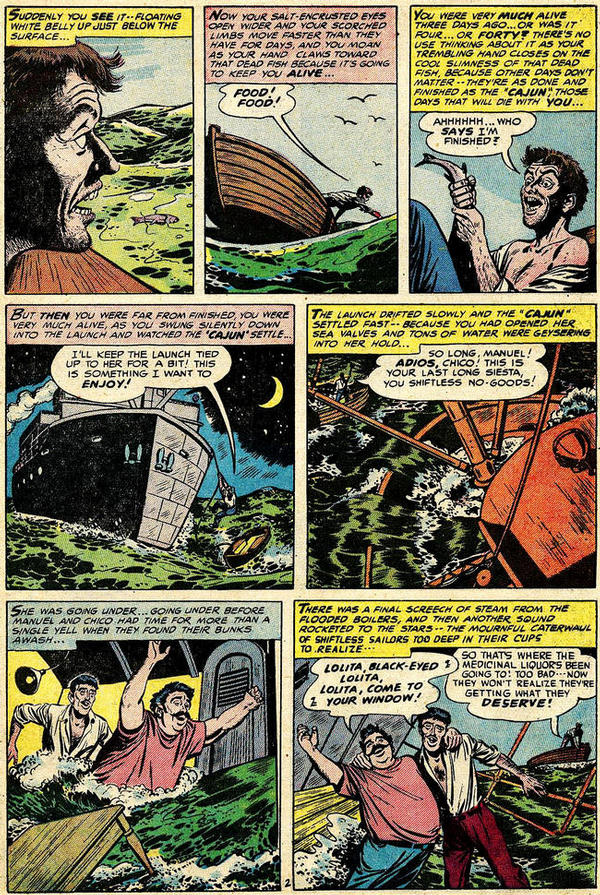 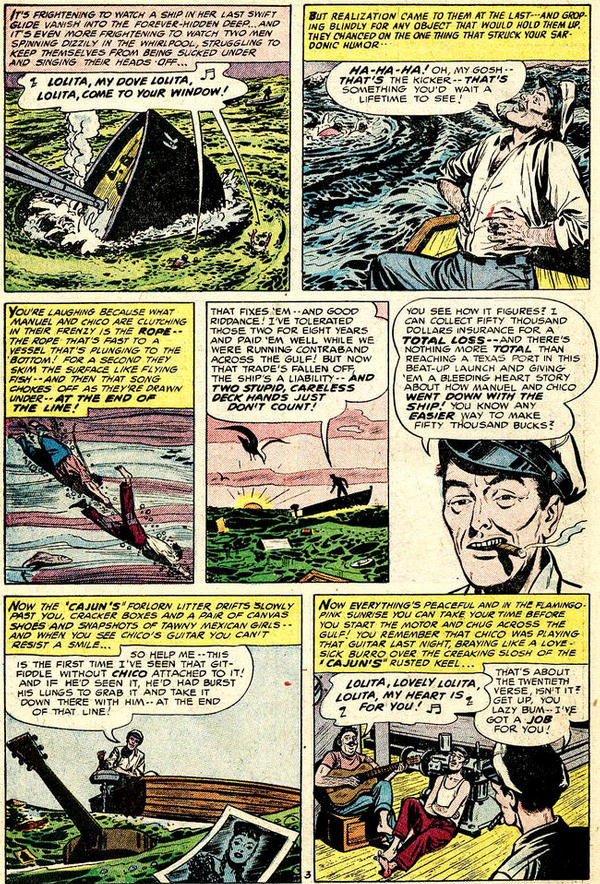 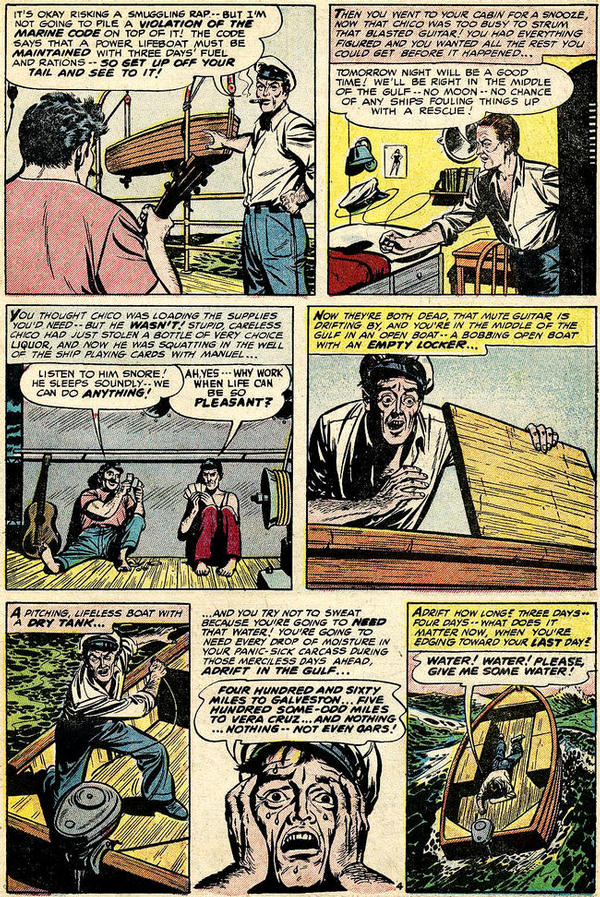 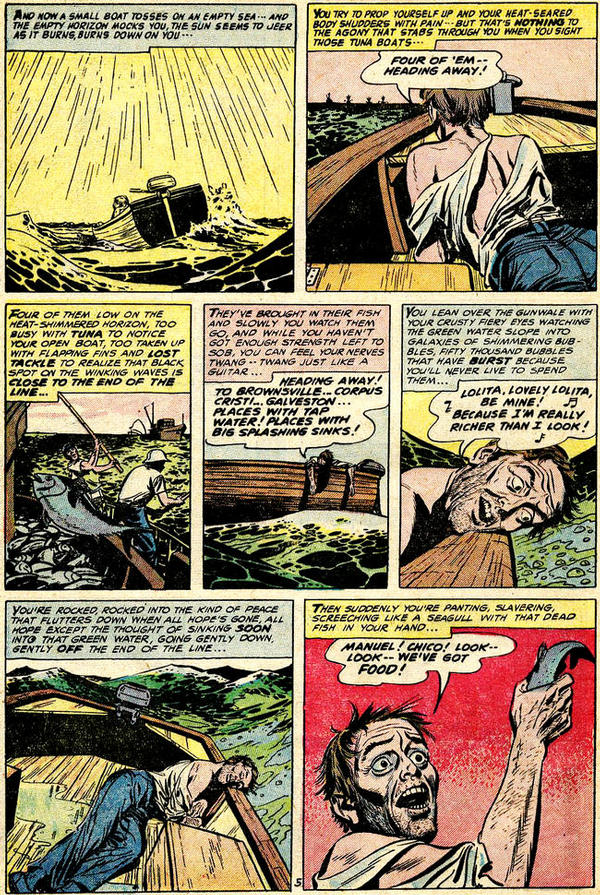 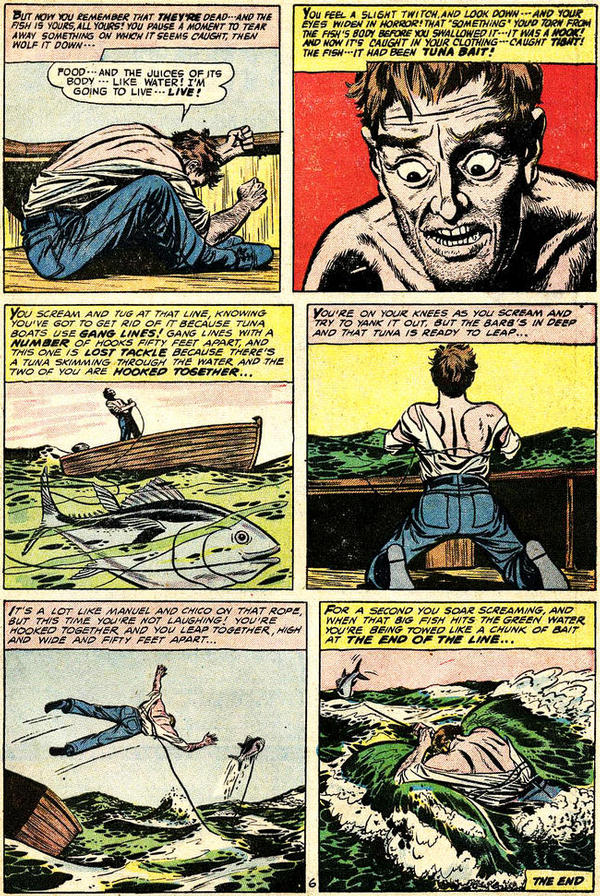 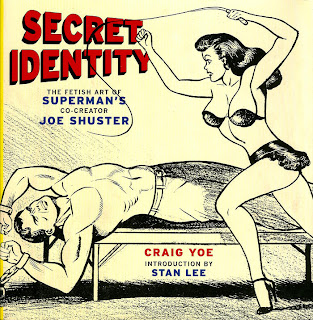 Craig Yoe tells two stories in this book: One is of a sleazy publication called Nights of Horror used as the centerpiece for a sensational 1954 case of murderous, sadistic delinquents tabloids called the Thrill Killers. The other story is the tragedy of Joe Shuster, the one-time great American success story, Superman's original artist and co-creator, who had the rug jerked out from under him. The two stories converge because Joe Shuster was the artist for the sleazy publication, available in Times Square bookstores, which depicted whippings, torture and beatings.

Until recently it wasn't known that Shuster did the illustrations. Anyone familiar with his work apparently recognized his drawings when Yoe showed them a copy he'd found. It's why Yoe called the book Secret Identity. Shuster did the drawings in a sub rosa fashion for much needed money. 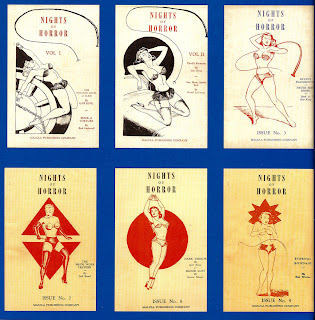 The storm that broke over Nights of Horror was fed by the furor over comic books in 1953 and 1954, when Seduction Of the Innocent, by Fredric Wertham, M.D., was published.* The boys who emulated Nights of Horror were also inveterate comic book readers, crime and especially horror comics. Dr. Wertham was called in to assess the boys, and his methodology was the same he used with his other "research." If Wertham talked to a kid who had gotten into trouble he asked him, "Do you read comic books?" and if the kid said "yes" then the comic books became the reason the boy was in trouble. It didn't have to do with the kid being a sociopath who happened to read comic books, he was a sociopath because he read comic books. In this case Wertham brought a set of Nights of Horror to the gang leader's cell and asked if this was the sort of thing he read. The boy thumbed through a couple of them and said, "That's it."

That boy Wertham showed Nights of Horror to sometimes dressed up in a vampire outfit when he went out to do his damage, and that was somehow tied to Atlas horror comics. Stan Lee, who was the editor at Atlas, doesn't mention the connection in his introduction to the book.

So the Thrill Killers case was tabloid fodder, making lurid headlines in 1954. The heat came down on the printer of Nights of Horror, but not Shuster, who remained anonymous. At the time of his death he probably thought this episode in his life would never be known.

Craig Yoe talked to people associated with Joe Shuster, and to people who had something to do with the case of the Brooklyn Thrill Killers. I'm surprised he found them; it's been almost six decades and the case is long forgotten by the public. Nowadays the illustrations that caused such a firestorm can be printed in a well-produced book, published and distributed by a class publisher like Abrams. What seemed horrific at one time: pornography, forbidden rites, BDSM, fetishes, high heels, whips and chains, even voyeurism, seems tamer to us now. Turn on the TV on any night of the week and the crime and detective shows will produce something much, much worse to look at.

I bought Yoe's book because I was curious, like many others who buy it, I suspect. I'm a fan of the history of comic art and comic books. Shuster's illustrations are given the bulk of the book, and are fascinating when looked at in their context as both notorious and an offshoot of the history of comics. What I noticed is that they aren't any worse than that which had been published a couple of decades earlier in the Spicy line of pulp magazines. In the examples printed in Secret Identity of whippings, for example, not one shows a whip actually hitting flesh.There are indications, light lines across a back, but Shuster kept it coy and showed as much as he probably thought he could get away with without showing absolutely everything. There is a picture of a bound girl being prodded with a knife, yet many horror and crime comics of that period showed people being stabbed by knives. Nights of Horror was probably less graphic than some of that era's 10¢ comic books. Shuster's illustrations are not as titillating as we would see today, or even by the standards of fetish artists like Eneg (Gene Bilbrew) or Eric Stanton.

Secret Identity is a fascinating look at a hitherto unknown bit of comic books history, and credit goes out to Craig Yoe for bringing it to our attention. 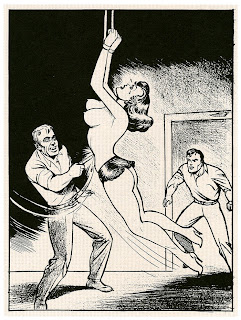 *Wertham and his book, Seduction Of the Innocent created my interest in crime and horror comics. When I read the book in 1959 at age 12 I hadn't seen any "real" horror comics and I made it my business to find as many of them as I could. I wanted to see what made them so bad. I'm sure there are other fans like me who used that book as their starting point. Wertham's book is an example of the law of unintended consequences. He set out to do one thing and yet, over time, did something else.

As Secret Identity shows, over a half century later we see this sort of thing as campy or quaint. Horror comics of the '50s may have gruesome images which are themselves fetishistic, with skeletons, walking corpses, chesty females (sometimes in bondage), monsters and killers, and while we may love their funky look (as I do) the original shock of these comics is mitigated by the violence of modern movies, television, video games, and yes, even comic books.

I appreciate you running the Shuster piece here, Pappy. I had heard about this book and after seeing this, I believe that I will seek it out.

Despite the subject matter, the drawings here look pretty good. Pulpy, yeah, but having the early Shuster art present lends it a nice air.

You can definitely recognize Joe's pencils. What ultimately happened to him - while the stuff of legend - is one of comics most shameful sins.

Great review! One of the things that made Golden Age comics so potent was a repressed (usually) undercurrent of sexual lust and sado-masochism. It's fun, but no surprise to learn the artist and co-creator of the pappy (ahem) of all superheroes, SUPERMAN, also drew more explicit material. So many of the men in Shuster's "secret identity" drawings resemble Clark Kent. It's fun to imagine what a gritty, grindhouse version of Superman by Siegel and Shuster would have been like! Have you reprinted any of the S&S FUNNYMAN stories? These were a post-Superman attempt to created a successful property in which they woudl have a larger share of the earnings. The guys worked their heart on this short-lived book, but alas, Funnyman was anything but, and didn't bring S&S the income they needed. Even so, the stories are tres bizarre in a Freudian way, and fun just for that. Thanks again for your great review of this book. It makes me want to go out and buy it!

Nice Ogden Whitney work in the first story! I still have the issue of Herbie #2 I bought at Al's News Stand—the first comic I ever purchased, I'm pretty sure. Cover's gone, center pages have fallen out, but what the heck!