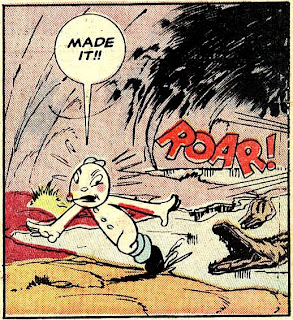 
Not Frosty the Snowman. Just Snowman.

If Tally-Ho Comics #1 (and only) had not been known as the professional debut of Frank Frazetta, it might alternately be known as one of the most off-the-wall comic books published during the 1940s. The cover makes it look something like a kiddie comic, but the interior is anything but. In the lead story, Snowman's nemesis, Fang, is a very scary looking guy. Since there was never another issue we don't know what Snowman was, exactly...or what Fang was, either. John Giunta and Frazetta drew the story, but I don't know who wrote it. H.G. Ferguson, who was Simon and Kirby's letterer on their crime and love comics, did the "lettering designs," one of the only times I've ever seen a letterer so identified in a Golden Age comic book.

Tally-Ho is listed on the inside front cover as being published by Swapper's Quarterly, Chicago, IL, and the Overstreet Comic Book Price Guide says Baily Publications, in parentheses. I don't know how they knew that, but if it's true then Golden Age comic book artist, Bernard Baily, likely had something to do with it.

Overstreet dates it as December 1944. To add to the mystery about Tally-Ho, the undated indicia lists no copyright claim. The Swapper's Quarterly publishing credit could have been that being produced during World War II maybe Swapper's Quarterly, of Chicago, IL, had a paper ration that they used to print Tally-Ho. 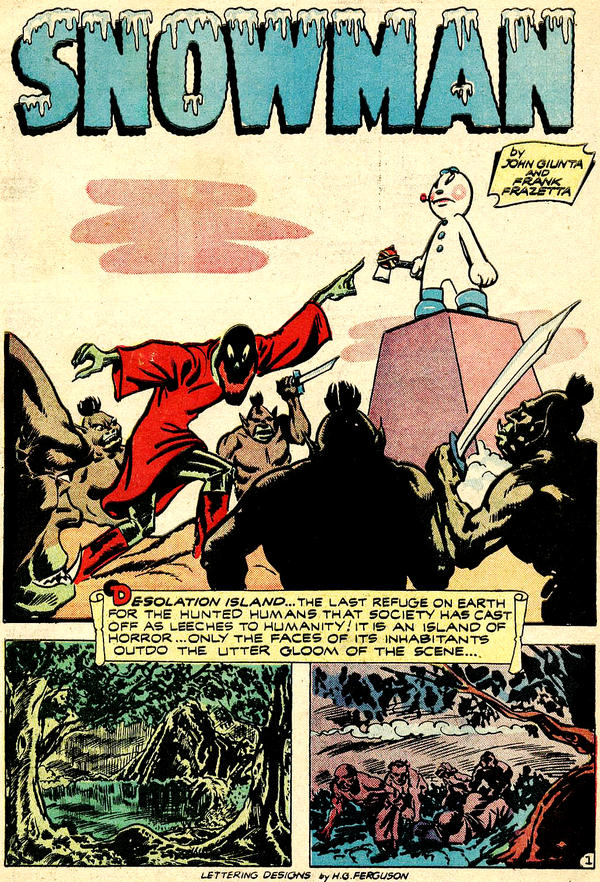 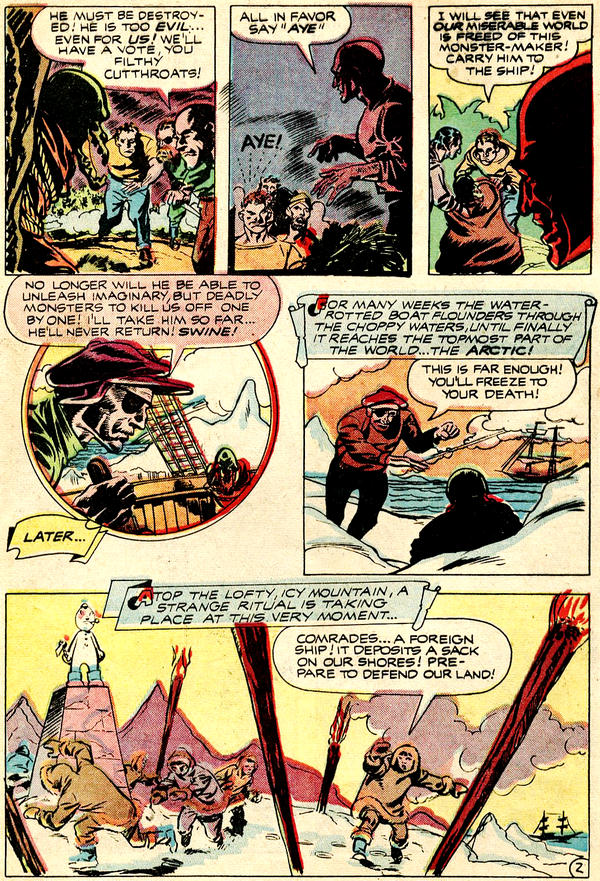 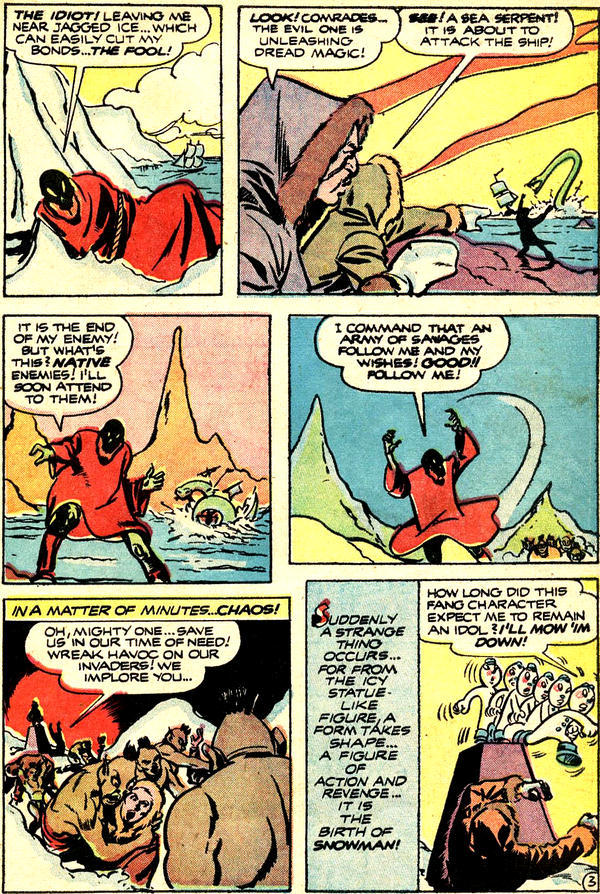 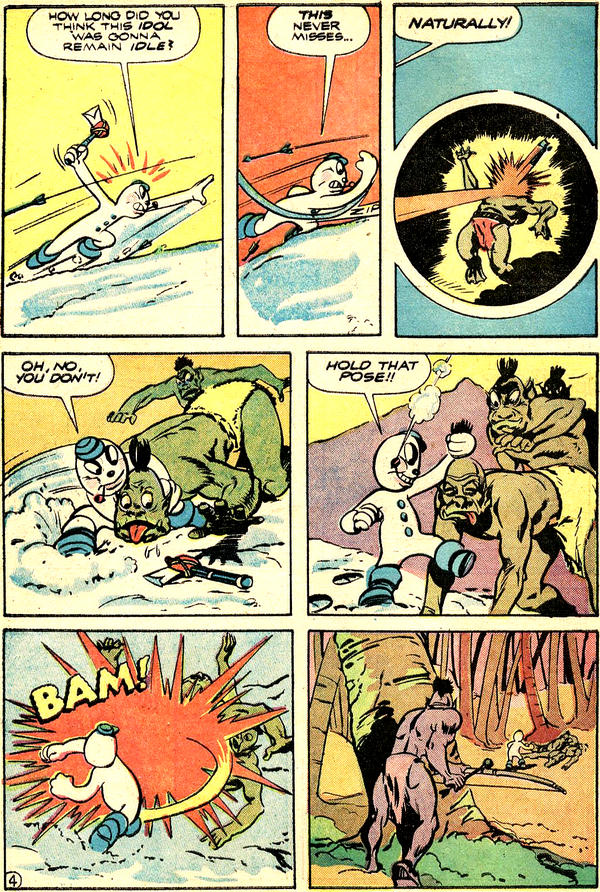 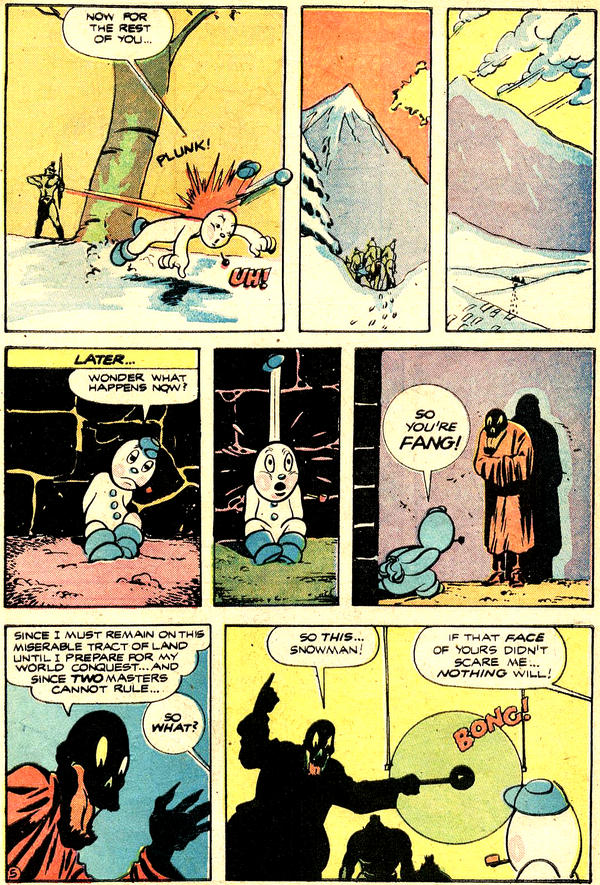 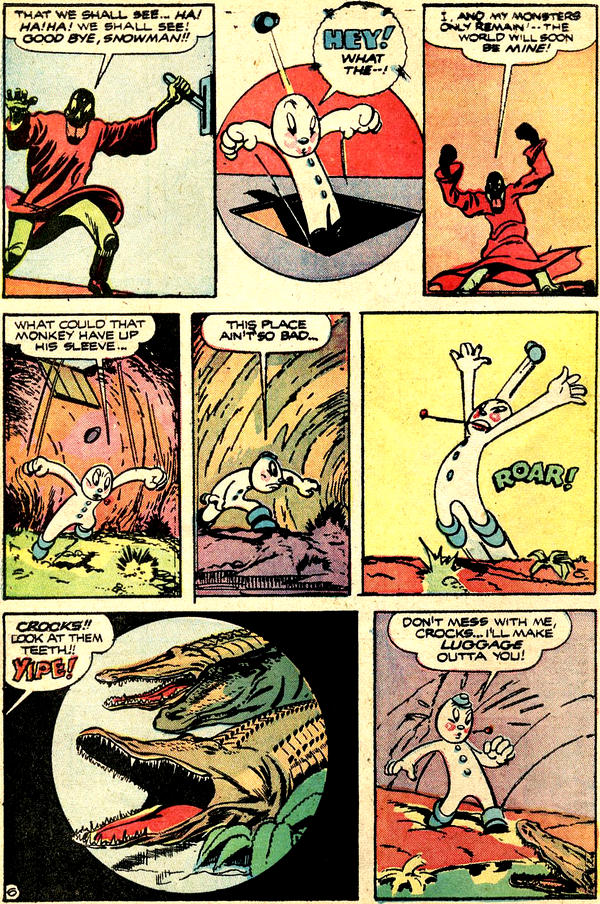 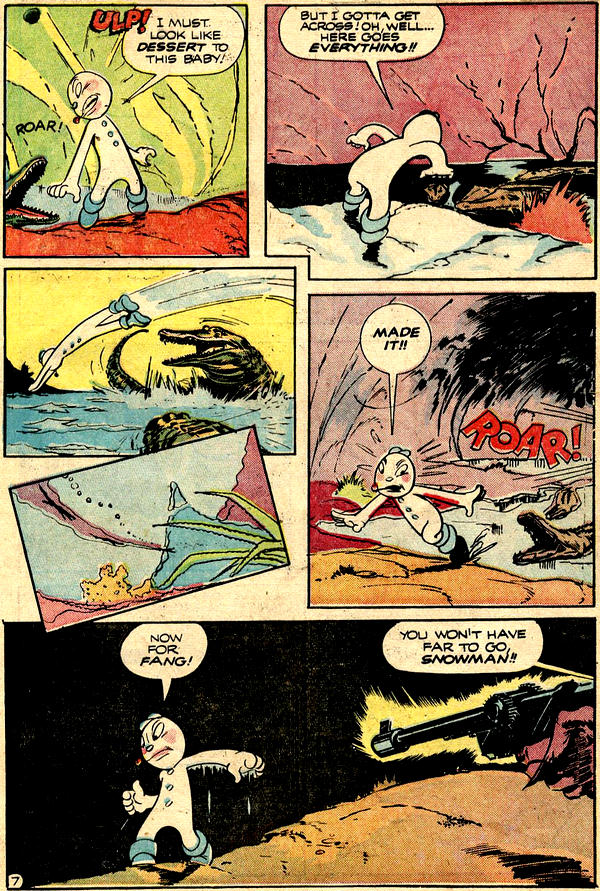 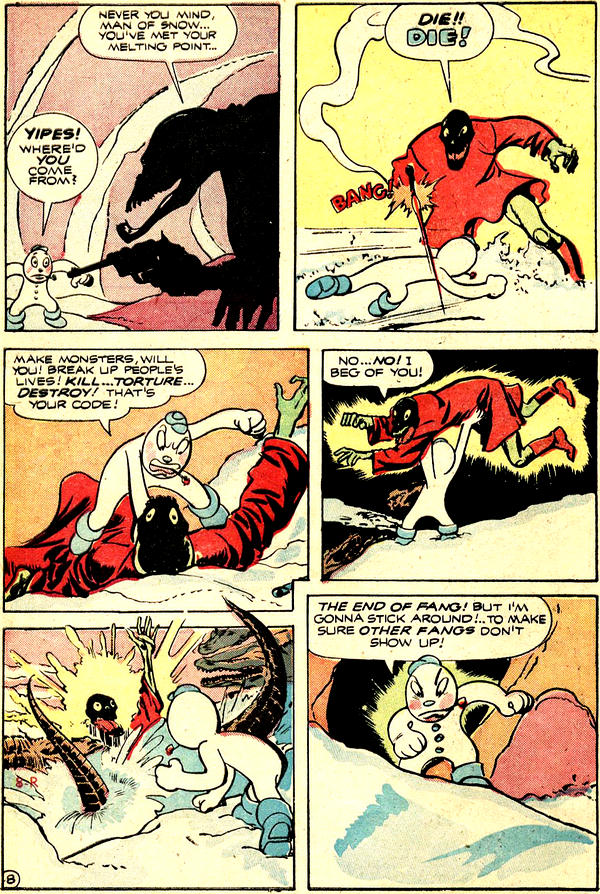 I had read ofGiunta's influence on Frazetta but never realized they actually worked together...especially on something as wacky as this!

I seem to recall Baily was involved as a packager for comics, kind of like Funnies, Inc. so maybe he pieced this one together for the Swappers Quarterly (which sounds like some sort of newsletter??)

Wow, I really liked this one... kind of the forerunner to Archer Prewitt's Sof' Boy.

Haven't seen this in years! And I don't remember it being this insane, either. From the almost non-sequitur plotting, to the decidedly out of place dialect of Snowman himself. Thanks, Pap! But you have to wonder, if those evil guys on Desolation Island were so evil, why didn't they just cut off "Fang's" head? Seem like a bunch of punks to me.

I dunno, there's just something about a snowman...when I was a little kid, five or so, Dad took me to a grocery store and there was a guy walking around in a snowman costume, maybe Frosty. He snuck up on me and poked me on the shoulder. When I turned around it was to a grinning apparition with a top hat and "coal" for a mouth.

To this day, brrrr. Snowmen creep me.

I'm not sure of the division of labor on this strip. It looks like Frazetta did some penciling. Giunta was OK (another of those comic book journeymen I have written of before), but no one could match Frazetta.

Booksteve, I did some research on Bernard Baily and you're right, he did have a shop to produce comics. He's the one who produced the Mister Mystery horror comics of the early '50s, for instance. I don't know if he personally did any work in Tally-Ho.

I think during this era, as the war was winding down and super heroes were losing their appeal, that comic book publishers were throwing anything at the wall to see if it'd stick. It seems that '45 and '46 were a couple of years of oddball comics, and I'll look around for more examples.

Very early Frazetta stuff. I think he must have been simply getting his feet wet on this project.