Number 1885: The Phantom Stranger and the Moon ©ult 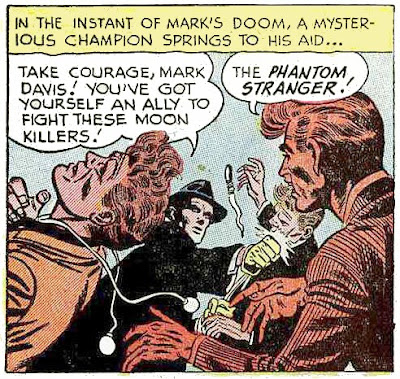 DC’s initial run of the title, Phantom Stranger, lasted six issues. It was another of Julius Schwartz’s books, and as I have mentioned with his equally short-lived Danger Trail, it may have had something to do with his newer titles of that era, Mystery In Space and Strange Adventures, both hits needing his close attention. Or, it could just be that Phantom Stranger, despite provocative covers and good art, just didn’t survive in a crowded comic book market. It is too late to ask any of the principals involved.

“The Three Signs of Evil” is by John Broome, drawn by Carmine Infantino, inked by Sy Barry and Joe Giella. The first thing that struck me was the "c" in the circle, which here is an evil sign, but is also the symbol for copyright, as in “Copyright © 1952 National Comics Publications, Inc.”

Unlike my example, the boilerplate indicia DC used in that day doesn't use the symbol. So, for the purposes of this posting an evil symbol it is, and forget I said anything. 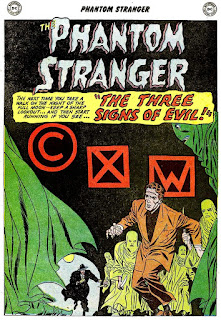 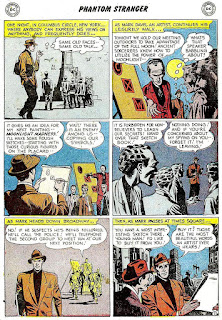 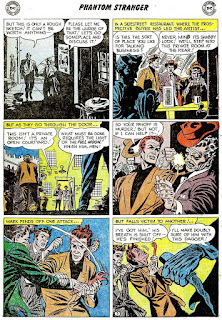 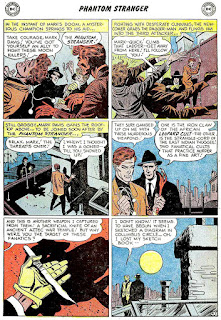 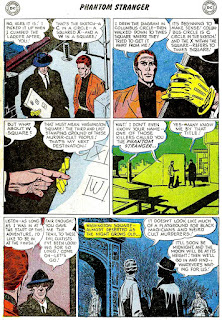 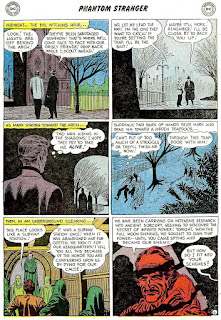 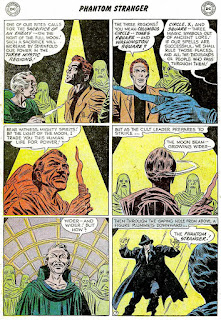 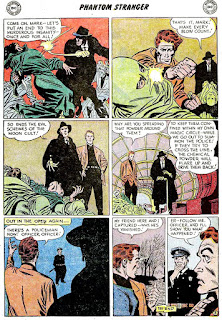 In 2012 I showed the debut of the Phantom Stranger. Just click on the thumbnail. 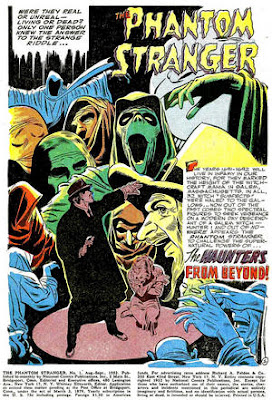 I couldn't tell you why it flopped but there's really nothing to hook the reader here; the Phantom Stranger doesn't have an interesting (different) look or powers or gimmicks, and the villains are pretty generic.

The arts obviously nice from Infantino.

In the early 70s DC managed to get a Phantom Stranger up to 41, but if you look it's all skeletons, swamp monsters, mummies, etc. There's a hook that would work in the 70s. In 52, every other comic on the stands had spooky things on the covers.

For me the late 60s revival of PS was far more effective,even though it was padded with reprints in the beginning. As a kid,it was a favorite. This is my first comment though I check your site regularly so greetings Pappy and best to you!

Topologically, there is no difference between what we conceptualize as the outside of a curve on a closed surface and what we conceptualize as the inside. Thus, it's unlikely that one could formulate a powder that responded in one manner to approach or crossing from within a circle and in another to approach or crossing from without. Which is to say that the Stranger's powder would repel the police and Mr Davis in their attempts to take the Lunar cult into custody.

Hollywood often gives us the writer-hero (as scriptwriters who once couldn't get the attention of high-school cheerleaders and now can't get that of baristi and of starlettes try to win the game by controlling the meta-game). In comic-books, it seems that artist-heroes are over-represented.

Art must truly have reached a low point in 1952 if Davis could believe that a collector were overwhelmed by his sketch of an arrangement of three simple symbols. And there's a dubious ethic in selling a sketch of a drawing by someone else!

Like his later-cohort, the Spectre, the Phantom Stranger developed over time from a two-fisted enemy of cultists and debunker of fake supernatural schemes to a magical character who figured into genuinely supernatural situations. In these early tales you can see his eyes and he just wears a regular business suit, but later his eyes became obscured by shadow and his clothes looked more like a conservative Doctor Strange, complete with amulet necklace. And, rather than actually get into the fighting himself, he became a hands-off guy, staying aloof of the action and just giving cryptic advice. I remember his Secret Origin comic actually featured three different origins for him--appropriate for such a figure--one of which revealed him to have been Judas Iscariot. Whereas this early rendition had a hard time sustaining his own title, the later fella couldn't possibly have starred in a comic, which is why he's been an occasionally supporting (and even cameo) character in everyone else's books. Maybe a combination of the two versions would've been fun.

Dale, it's always nice when a regular reader writea and says hello for the first time. Thanks for comment and your support.

Of course, like everything else I love or hate about comic books, everything changes according to how I feel at the time I'm reading it, so take my opinion for what it's worth at 8:07 a.m. on May 5, 2016.

Daniel, I get the part about doing the ceremony on the night of the full moon, but does one have to be outside in moonlight in order for magic to work? What tripped the cultists was doing their sinister business outdoors for any passerby to see. I'm reminded of the modern equivalent, when dolts on Facebook show pictures of themselves holding up stolen goods for everyone, including the police, to see.

And even if the powder worked to repel Mark and the cops from the cultists (I assume the good guys could just take the toe of a shoe and cut into the powder of the circle, rendering it harmless), how do you think it would sound when Mark tried to tell the police what the murder cultists were up to, especially if the bad ones lied and denied?

Brian, I bought a lot of those comics in the '70s with mummies, skeletons and swamp monsters, but I don't remember ever buying a Phantom Stranger comic.

Just for a little more clarity, the now omnipresent copyright symbol (©)was introduced into the US in 1954.

I have read the story of the three different origins hypotesized for the phantom Stranger.
Looks like D.C. comics hardly knows what to do with this guy, and in a way I understand why.
Sometimes, it is difficult to conjure up a decent explanation for an intriguing and mysteriuos character.
Part of the Stranger's appeal is in that we don't know his motivations, and you can always think of a good origin story ... but really... Judas Iscariot sentenced to walk forever as an enforcer of the Cosmic Order until he finally "atones" (atones for what? He was a necessary tool in God's plan)... Not very original.

You mention Herbie as a "supernatural" character, and I never thought about him that way, more like a mutant or something like that. Or the Fat Fury, of course.
There's a fine line between "supernatural being" and "superhero". What is Thor, exactly?
But Herbie does "supernatural" things. Only, he's not grim and serious like the Stranger.
We tend to think that "supernatural" heroes have to be grim and solemn (with noticeable exceptions, of course, like Kid Eternity). The Stranger, though, has been used in comedic interludes.
In a Blue Demon annual, he battled Felix Faust along with other supernatural characters (the overall tone was very slapstick), and once Lobo said to him: "Wait! I've seen your movie ... you're Elwood, right?"

As a legally binding symbol, that is -- as per the 1954 amendment of the Copyright Act of 1909. So maybe my first message lacked the clarity I hoped for after all.

Is that the same Sy Barry that drew the adventure strip: the phantom? It looks a very similar style so I think so.

Odyzeus! Holy ©rap! That's interesting, and news to me, joining ™ and ® as legal symbols of ownership. I'm not sure when those symbols became widely used, but I don't remember them (or more correct, didn't notice them) before too many years ago.