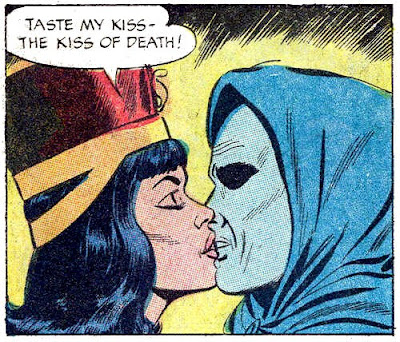 The T.H.U.N.D.E.R. Agents heroes of the sixties, spread over the eponymous title, and a couple issues each of comics NoMan and Dynamo, seem much more akin to Golden Age comics of twenty years prior. The stories are simpler than the grand cosmic epic that wove its way through the Marvel Comics line, or the often bizarre stories from DC Comics.

I had not looked at NoMan #2 (1967), from which this story comes, in many years. At the time of its publication I was familiar with artist Ogden Whitney, but not as a superhero artist. To me he was an artist at ACG doing supernatural stories, and he drew the deadpan Herbie comics. I did not know then that Whitney had drawn the hero, Skyman, for Big Shot Comics 25 years before drawing NoMan.

And NoMan is really no man...he is an android. I thought that was cool: a dead guy who could inhabit android bodies, which were stored at HQ. They were ready for him to pop into life and go into action. (Had this concept been an actual Golden Age superhero, he would probably have been shown as a mechanical man, which also sounds okay to me.) Oh, and NoMan had the added benefit of a cloak to render him invisible.

This story is about an Egyptian priestess who has lived for several millenia by killing a guy a day. The body count, which had to be staggering, isn’t discussed, but the method is: she kills them with a kiss. Must’ve been some kiss. I read this when I was twenty and thought, “A kiss? That’s ALL?” A twenty-year-old male would tend to think like that. I wouldn’t doubt I added a few uncensored scenes in my head between the panels, if you know what I mean. 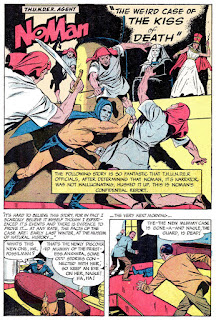 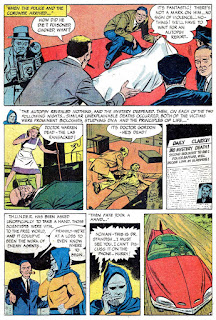 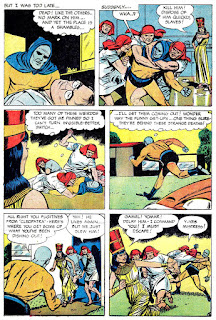 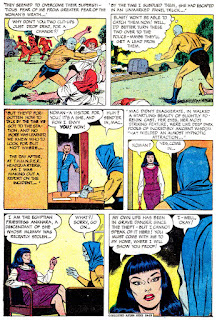 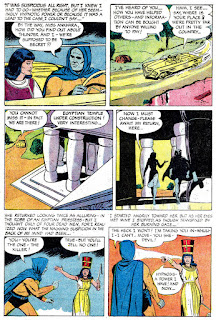 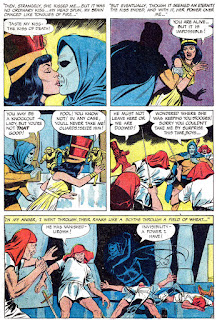 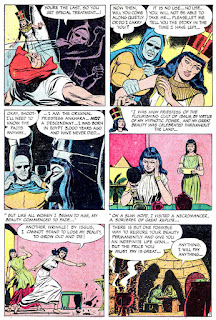 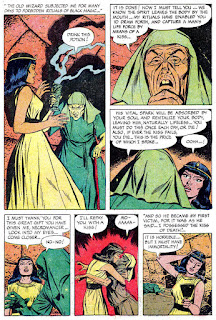 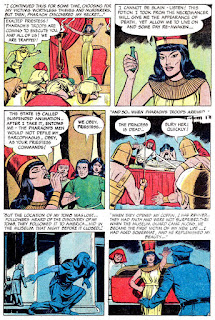 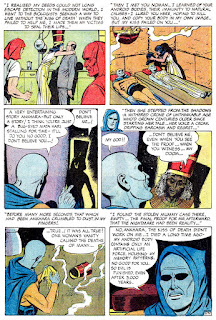 This story is of course yet another reworking of She: A History of Adventure by H[enry] Rider Haggard. In Haggard's tale, Ayesha is nearly immortal as a result of having bathed in the Flame of Life, after having been made aware of its existence and location by an old wise man, named “Noot”. Ayesha does not slay people as a necessary means to extend her span, but Haggard originally conceived of her as evil, and (having fallen in love with his own character) reworked her into a sort of Nietzschean Ũberfrau, who routinely killed those who defied her, and otherwise treated the lives of most of those around her as means to her ends. Ayesha's death in She, resulting from the error of bathing a second time in the Flame, was also a matter of accelerated aging, though this wasn't followed by accelerated disintegration of the corpse. (That seems to have been introduced with The Mummy (1932) which was itself very largely a reworking of She.) In the sequel or in one of the two prequels, it was developed that Ayesha had been a priestess of Isis [sic!].

For various reasons, I didn't get to read most of the T.H.U.N.D.E.R. Agent stories when they were first released, but those that I read certainly got my attention. The art was often outstanding and, even if the plots might be simple, the heroes had special nuances to their characters. In the case of NoMan, on at least one occasion he was so unhappy with his existence that he began destroying his android bodies, so that none would be left to continue that existence.

"It is horrible but I must have immortality!" How many times have each of us said that? What a story. Heh. Amazing what gaps writers would leave in their comic book yarns to jam in the clichéd material that perhaps their editors wanted. Sure, I get the connection between Noman's android immortality and some Egyptian gal who must have immortality no matter how horrible —a natural tie-in but the gaps in this 10 page opus provide me some chuckles. What about the priestess' stooges, I mean, followers. I can't help but wonder whether these are the same guys from 3000 years ago who also drank suspended animation potion or are they the umpteenth generation of stooge followers? We'll never know, they lose the ability to talk whenever they get arrested...

With a T.H.U.N.D.E.R. Agents comic story you bring back again comics from my 1960s childhood. The Noman character was one of my favorites from that comic book series irregardless of all the story logic gaps. And gaps there were. But the art was what caught me the most. Wally Wood did the lead story of the first T.H.U.N.D.E.R. Agents issue, as I recall. Ogden Whiteny did fine with this, as usual.

Alicia, if you're asking, I don't know...if you're telling then you are more enlightened than I.

Daniel. I'm sure it is the curse of being aware of our mortality that causes humans to fantasize about immortality. Whether you dream of it in your mortal or post-mortal existence. The thought that people achieve immortality by taking lives goes back to vampires and folklore that supposes (perhaps because of the concept of original sin?) that eternal life in our human body could only be gotten through some supernatural and evil means.

Ayesha is a good character who also owes something to ancient myths. Ryder Haggard has achieved his own brand of immortality by creating literary characters who have lived on through more than a hundred years of changing tastes by readers.

7f7, as I recall, Tower Comics were not sold in my town...I had to travel 40 miles to the next county (serviced by a different magazine/paperback book distributor) to find them. I could not find them when I was in the Army. I bought the bulk of my Tower Comics collection in the late '70s.

By that time I was more in tune with their approach, moreso than when I compared them to Marvel Comics, which I was a big fan of in the early-to-mid sixties.

Harry Shorten was the publisher of Tower Comics. He had been at MLJ Comics in the early forties, and had a bunch of publishing irons in the fire. He even published softcore pornography with his paperback book line. Considering Wallace Wood's connection to Tower and to Shorten, I'm not that surprised that toward the end of his life Woody (no pun intended) went into soft and then hardcore pornography.

This story was written by Steve Skeates, one of my Facebook friends. It definitely has a Golden-Age feel to it, in the dialogue, the simple (even old-fashioned) plot, and the short, punchy scenes. It's interesting, because Skeates didn't grow up on GA comics; his early ambition was to be a humorist--he read all the great humorist writers as well as the classics--and he only got seriously into comics with the rise of the "Marvel Age." He's quite a loquacious guy who can't help injecting humor into nearly everything he writes (you should see some of his FB posts), which would account for Noman's flippant, fast-patter dialogue. One thing I don't get--and I'll have to ask him about it--is why he has Ankhara as a priestess of "Issus." Isis was the Egyptian goddess; Issus was the town where one of Alexander the Great's battles took place (and the town wasn't in Egypt). The only Issus who was a deity was the one in ERB's Barsoom Chronicles. Maybe Skeates got them confused.

Speaking of that priestess and her serial killings to stay young (okay, immortal, but still young-looking), I didn't think of Haggard's "She" but rather the historical Elizabeth Bathory, who reputedly killed many virginal females and bathed in their blood, in the belief that it would keep her young. I wonder if Haggard and writers of similar tales were at all influenced by Bathory, perhaps?

When I got to the panel where Ankhara (masquerading as her descendant) entered Noman's office and simply said "Noman?" I suddenly wondered if anyone (in the fictional 'verse) ever pronounced the name NOE-min, like "roman." Just something that popped into my head.

Do you suppose the writer meant she was a priestess of Isis, and it got scrambled? Issus is a river, or a town on the river, in present-day Turkey.
Thanks!

Darci, I leave you and Ryan to get the information on Isis/Issus, from Ryan's FB bud, Steve Skeates.

Ucchhh its not NORMAN u dolt! It's like NO MAN. OMG Deb SMH

Ryan, it's too bad they didn't have writer's credits. I remember Steve Skeates from Plop! Yes, I thought he was a funny writer. But writer's gotta write what the publishers want.

If you get the information about Isis/Issus share it with us. As you can see, Darci is one of the inquiring minds who want to know!

Hey Debbie, here is a song about "Norman." This is so old they don't even play it on the oldies stations.

LOL Pappity TYSM I luv ur song but I think it wuld B betterer if it was about ROBO-Norman yo!

BTW Lee sez I gotta apogalize 4 being a nidiot & that it snot NORMAN, its like Nom Nom Man or sumthing I think. Aww so cute nom nom

OMG Pappity we got axeded 2 appear @ a comic convention w/Mickey Monkees Dolenz this Summerer 2016 I think we mite go Hooray! ~ <3 I dunno if any of our humens will go, probly just us cartune characterers. We can live blog on Vine

Debbie...Alicia...you gals play nice if you don't want me to separate you until you can get along. We have a no-insult zone here at Pappy's.

Debbie, the lady who sings "Norman" just had her 91st birthday. Just think, as a cartune you will never grow old.

OMG Pappity ur so sweet, u'd stop Moe from beating up Curly.

LOL Pappy liten up, we R cartunes, this is our act. I'm tha girl u want 2 D8 but u cant becuz I luv Alicia & she keeps me from D8ing u by insulting me all tha thyme.

WeR Baseded on real peeps but we R a comady & music act. No1 is insulting tha ACTORESSES or SINGERERS who play us LOL! LOL! LOLEREST omg