Number 1891: The terrible secret of the 2016 Presidential Election: The Phantom Fiend! 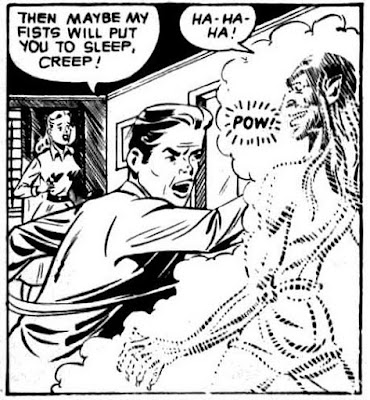 Now we know why the 2016 American election cycle has been so bizarre. At least one of the candidates has been possessed by a demon, the Phantom Fiend. We are warned by this story: The Phantom Fiend has inhabited Senator Phinley, leaving the real Senator Phinley’s consciousness in some old guy, who begs someone to believe he has been kicked out of his own body. The closing caption asks, “Who knows which humans are possessed by Phantom Fiends?” Well, we know at least one, or maybe two, on our television screens every night.

Unfortunately, exorcism won’t work...but voting will. (And having said that, I am not welcoming discussions in the comments on the current American political season, and I will endeavor not to mention it again.)

The story, originally published in Adventures Into the Unknown #44 (1953), is shown here in a black line reprint from an undated Australian comic book, Tales of Torment #1. The story is drawn by Maurice Gutwirth, although the Grand Comics Database hasn’t updated its listing of the artist as Paul Gattuso. There has been confusion over Gutwirth’s work, because it seems similar to the angular faces that Gattuso drew. 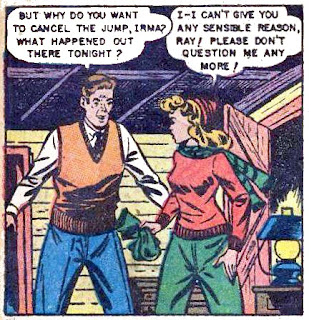 The above panel is taken from an Ace horror comic, Baffling Mysteries #24. It is identified by the GCD as Gutwirth. You can see the similarity in the faces 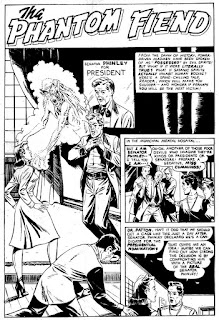 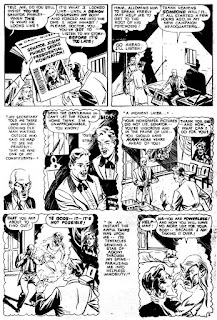 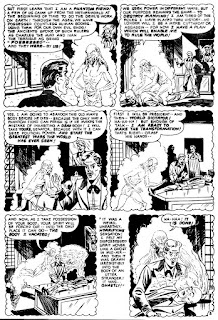 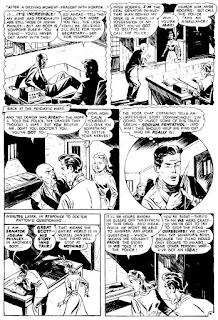 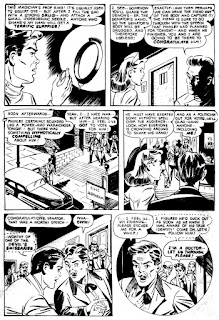 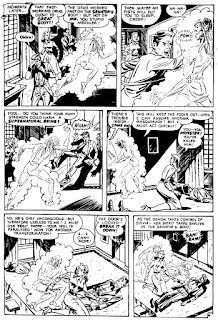 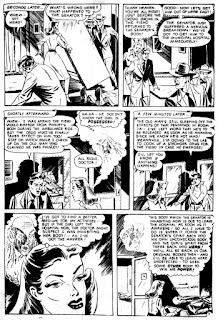 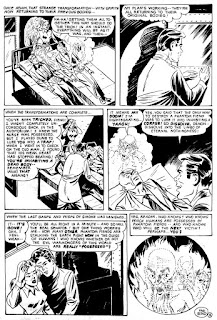 Email ThisBlogThis!Share to TwitterShare to FacebookShare to Pinterest
Labels: Adventures Into the Unknown, Maurice Gutwirth, Tales of Torment

If a “truth” serum would truly evoke the truth, as opposed to a sincere belief, then we'd have a way of bypassing science and philosophy as we now know them. We'd just shoot-up someone with the serum and ask important questions.

In 1965, a then famous politician (whom I shall not here name, and who was father of a now-famous politician, whom I shall also not name) visited Viet-Nam and then spoke in support of US involvement in the War. In 1967, he reversed himself. His explanation was “When I came back from Viet Nam, I'd just had the greatest brainwashing that anybody can get.” He was, of course, speaking hyperbolically or metaphorically; but … that was it for him. His career was basically over.

So, imagine Phinley. He either had to stick with the war-mongering or … what? Tell the world that he'd been possessed by a Phantom Fiend? Back in the booby-hatch for him! Would the doctor and nurse support his claim? Two more cells would then be prepared. No, I think that Phinley would have to retire. So, war-mongering it would be, then!

"Great scott--his story was true! There's absolutely no chance it's just a deeply embedded psychosis that resists the sodium pentathol! Let's go do something dangerous based on this!"

The ending was easy to figure out when the doctor said that the old man was still asleep from the drug, and I'm usually slow on the uptake.

If the phantom fiends have spent all the ages trying to destroy humanity, they're doing a $4!t job of it; we're up to 7+ billion people. Those monsters need to get on the stick!

Aha! The Rules of demonic possession have just gotten a lot clearer! You've done us all a service with this post, Pappy. I'm a little fuzzy on whether the characters were souls swapping bodies or bodies swapping souls and I hope a further comic book story elucidates the point. How fortunate that the soul of Senator Cruz —I mean, Phinley— did not disintegrate in the heart-stopped elderly body like that phantom fiend soul. I truly enjoyed your opening commentary as well, Pappy.

The whole body switch-eroo reads like a Abbot and Costello routine. And, honestly, the demon can't tell the body is dead? What kind of powers does the devil give his minions? Obviously not the power of minor observation!

I like the art but I bet I'd like it less in it's original form. Re-colored old comics can be good, some can be great, but black and white, divorced from the crappy bleed of four color presses is always a nice treat.

A male demon inhabiting a female still had to be risky for comic books in the early 50s. We do get some casual sexism as to how useless the demon views her!

I'm not familiar with American politics, but if I'm not mistaken, you are referring to a certain candidate who does not wish to "start the greatest war" or "destroy humanity", or whatever you expect from a man possessed by the Phantom Fiend.
He only seeks a way to have a very profitable ride on the seat of Power just for his own purposes, regardless of any ideology, or belief.

We italians have been through all this since 1994 and believe me, it's devastating. Because of one "Paraculo" [a man who had to cover his own ass from the law, especially on fiscal matters] who decided to enter the political arena, and was elected prime minister, we're still deep in trouble man, and it's getting worse.
The fact that we granted power to such a man is simply... exhilarating, when you see him on tv or when you listen to his old speeches... but we did it.

All our civil, ethical and political fundamental principles has been twisted in the last 20 years (the Constitution, to begin with), so my humble advice is, if you are about to elect a man just because he says "less taxes for everybody", think twice.

Ok. And now, Brian... I seem to recall a TV show from the 80's (Twilight Zone maybe?) where two demons, one male and one female, were actually battling to possess the body of a girl.
One of these demons (the female one) was called Aysha Kandisha...

In the history of dæmonology, there were arguments over whether dæmons were sexed at all. For example, some held that there were distinct incubi and succubi; others that incubi and succubi were the same things, taking different form depending upon their purposes; and some held that dæmons were so incorporeal that sex between them and humans were an impossibility, so that neither incubi nor succubi existed.

There were also arguments over whether and how dæmons could actually possess people, or merely influence them in other ways.

Notions of Satan and dæmons changed dramatically over time, and as educated people became aware of the historical evolution of received wisdom, it became harder for them to believe any of the theories.

Hi Pappy,
I'm with Daniel. Dr. Patton places much too much trust in sodium pentathol [sic]. We're fortunate the doctor is also an amateur magician (or just a practical joker?) and has that trick ring!
I wonder what the writer's concept of the Fiend was? The text says it has tentacles, but none are in evidence.
Thanks!

Darci, maybe the artist interpreted it to mean hair, but I dunno. An artist not paying too much attention to what the script calls for...?

7f7, since it is an ACG comic you're probably out of luck on whether any future story cleared up your questions.

The supernatural that ACG writers presented must be confusing even to the demons, werewolves, vampires, zombies and whatever else they threw into the mix of comic book hokum. Entertaining stories, though, in a whole 'nother way from standard horror comics.

Ryan, good grief, 7 billion? Why, it seems only yesterday there were only 6,999,999,999 people on the planet. The Chinese dropped their one child requirement, so that must be it.

If the demons are working to kill off humanity they are doing it in the opposite way, by making so many people the planet's resources are unsustainable.

Brian, really, can you imagine the mischief you could get into as a male inhabiting a female body?

I remember way back in my high school days, when the idea of a male turning into a female was still very rare, one of my classmates said, "If I had girl parts I wouldn't want to get out of bed because I'd be feeling myself up." (That's a more polite version of what he said.)

J D, there is no need for you as a citizen of another country to understand American politics, because I daresay most Americans don't understand it either. We are courted for our votes by those whose business it is to know how ignorant and often totally uncaring of the process many Americans are.

In 1920 the great American humorist and philosopher H. L. Mencken said, "When a candidate for public office faces the voters he does not face men of sense; he faces a mob of men* whose chief distinguishing mark is the fact that they are quite incapable of weighing ideas, or even of comprehending any save the most elemental — men whose whole thinking is done in terms of emotion, and whose dominant emotion is dread of what they cannot understand."

*Women attained the right to vote in 1920, but in my opinion it didn't make much of the total electorate less ignorant.

Daniel, sodium pentothal is one of those myths that come out of spy and detective stories. Like a "lie detector" being able to tell if someone is being deceptive or telling the truth. In my opinion humans are just way too complicated to have any one thing allow someone to detect absolutely when someone else is lying.

If we have learned anything as a species, it is how to lie. We call it bad, but we all do it. It is probably a survival mechanism, and sometimes it even works.

OMG Pappy Vote 4 me Im knot pozessded by a demon but I bin calld a trixter spirit by Dr. Bernardo Kastrup Yay! http://VoteforAlicia.com Yay 4 me Yay! <3