Number 1897: The Goddess and the Harpies 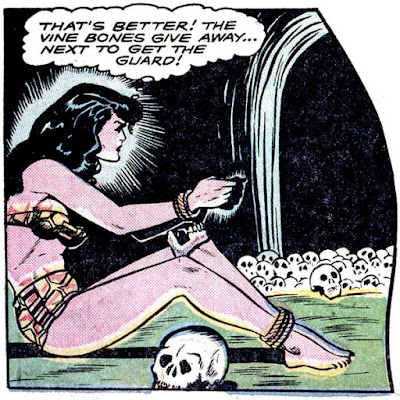 Day two of our Jungle Jive week, today featuring Rulah, a cute chick in a two-piece giraffe suit. In this story Rulah meets some harpies, who are more commonly found in Greco-Roman mythology. Perhaps things got crowded in Greece and Rome over the years, and they emigrated to Africa.

Don Markstein of Toonopedia.com tells us that Rulah was “born” in 1947 in Zoot Comics #7. Up until that time Zoot had featured funny animals (included in issue #1, a sexy kitty named Pussy Katnip), then teenage strips. Rulah was a hit, and why not? It was aimed at young men who had an insatiable appetite for panels full of hot chicks in abbreviated costumes. Zoot did not disappoint. If there were other women in the Rulah stories, you can be sure they were also as close to undressed as the postal laws of 1947 would allow. Zoot eventually changed its title to Rulah, Goddess of the Jungle.

Rulah today is from Zoot Comics #10 (1947). GCD guesses Matt Baker for artwork, but I do not agree. It looks like various hands worked on it at the Iger Shop. 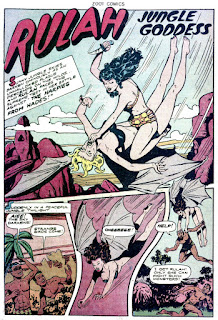 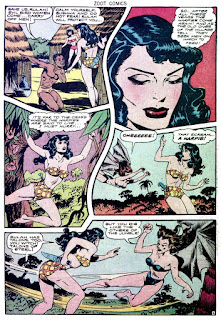 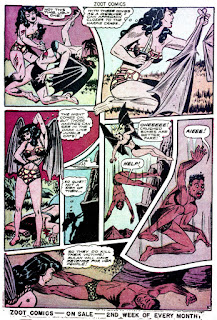 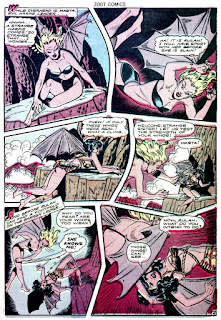 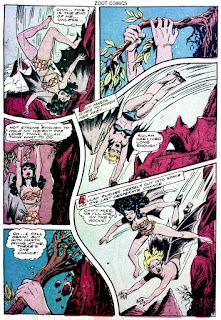 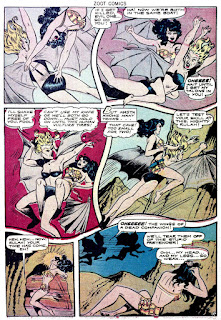 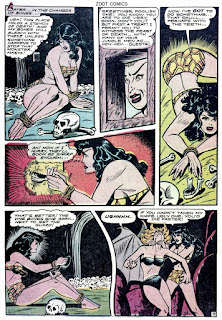 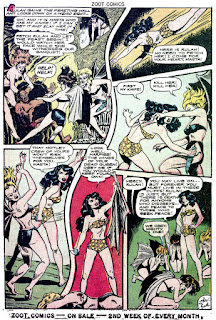 Yeah, that work is not generally on a par with what one would expect from Baker (I notice, in particular, that body proportions are repeatedly very wrong), and in those areas in which it is at its best it is not in his style.

I seems as if the dialogue were written for Rulah still to have been wearing wings in 6:6, though the art has her cutting herself free of them in 6:3.

The script itself isn't consistent. In 2:2, Rulah is shown to know of the Harpies from the Old Ones; yet in 4:4 she recognizes Masta, as if from prior encounter.

One of the things that bug me about all the stories of Rulah is the weird racialism. The men of the people over whom she rules are dark-skinned, with Negroid features; the women are light-skinned with Caucasoid features. (The other thing, not present in this particular story, is the frequent slaughter of women. Here, as we see, those dispatched are one man and two female Harpies.)

Hooray for Jungle Jive Week! AIEE! OHEEEEEE! So much here that makes comics swell... Not bad looking man-eating harpies in nice bikinis. The things writers would dash off to contrive some pages of writhing, bikini-clad female forms do bemuse. ONLY RULAH can fight such monsters! A jungle comic that lacks a scantily-clad beauty, at least one AAIIEE or a phrase close to, "there is but ONE CHANCE..." isn't quite up to snuff. This jungle comic did not have the heroine or hero kill any animals besides harpies which is unusual but still satisfying.

Pappy, you know the wealth of old comics are part of our cultural heritage with jungle comics well up there in the whacky pantheon. For your scanning and commenting efforts I picture you in the comic book jungle enthroned on a tree house porch with babes like Rulah and Lorna fanning you with ostrich feathers, serving coconut shell beverages, in the background dinosaurs, cruel white hunters, giant gorillas, Amazons riding zebras, in the foreground below, we, your blog readers kneeling with the word balloon chant: "We do obeisance to thee, O mighty Pappy!" Of course this fantasy disappears when Mrs. Pappy steps out and asks you to weed the yard...

Quite a gory story, isn't it?
Rulah stabs the harpies then cuts off their wings ... Is this the proper way to deal with endangered species?
"crushed bones are better fare"... lovely touch. No wonder they invented the Comics Code.
Anyway, it's always nice to see some good catfight.
Those harpies are a much better sight than those who plagued Scrooge during his quest for the Golden Fleece.

Pretty brutal for what's ostensibly a kids' comic: half-human monsters eating people, and the rather savage heroine ramming a knife into multiple guts and ripping wings out of bodies (with, however, surprisingly little blood). Did Rulah kill the harpies because they weren't fully human? She called them monsters, so do they count as animals in this story? I mean, would she kill humans? Did Sheena or the other jungle babes ever do so? I don't recall.

I took a careful look at Rulah's "skimpy" outfit and realized it's not quite so skimpy as it might be. While the top is revealing, the pants are comparatively modest; they don't stick up in Rulah's crack.

Wasn't Matt Baker's the house style of his shop while he was active? I seem to recall reading something like that, and I've seen other stories that, like this one, seem to ape his art. Even a Baker imitation isn't unpleasant to look at.

7f7, had to ruin your own fantasy for me with Mrs Pappy popping in, didn't you? Well, AAARRRGGGHH! to you, as I flash my steel, pound my chest, bare my teeth, and then go sit on the veranda. Hey, all that macho posing is tiring.

I do like your idea of me having my own fantasy jungle. Maybe someday they'll have a virtual reality device capable of such a thing. If so, I'll buy one.

Matt Baker made his impact on that house style, but I think he gets credit for more individual stories than he actually drew. A couple of artists who were pretty good at drawing those Iger Studio women were Robert H. Webb (Sheena) and Jack Kamen, later of EC Comics, but in the forties one of the artists who drew a lot of beautiful girls.

J D, both you and Ryan commented on the violence in this story. Sex and violence, that's what we want in a good Rulah story!

J D, those harpies in the Uncle Scrooge "Golden Fleece" story had to be called Larkies, because, as Carl Barks claimed, someone in the editorial office said that harpy was an old term for a prostitute. As Barks put it, "I almost had to eat that story." ("Eat it" would be an antique Americanism meaning doing a job and getting it rejected, thereby not being paid, so not able to buy groceries, and having to eat the job. Or at least it's the definition in my personal file of old sayings.

Daniel, when I first encountered Rulah in a stack of old Zoot Comics in the '70s, I wondered about that male/black, female/white. I wondered if it caused any concern in the Deep South. In 1948 there was a fracture over Civil Rights as part of the Democratic party platform, and those folks in states with strong segregation laws were sensitive about anything looking like "race mixing."

But, they probably didn't read comic books and didn't even know about it. The kids buying the jungle comics were probably too busy ogling the females to care about any anti-segregation symbolism.

Indeed, there was concern about racial mixing, but it has usually been asymmetrical, with less concern from within each community about their men mixing (one way or another) with women of other racial groups than about the complementary sort of interactions.* I think that banning white men having sex with black women were no more than to provide cover for banning black men having sex with white women. And the Democrats who bailed in '48 were led by Strom Thurmon, who surreptitiously fathered at least one child with a black woman.

Perhaps these images were meant to subvert opposition to such interaction, but to me they seem more in resistance to the idea that the readership, who would primarily have been white males, should find black females appealing.

One seldom if ever sees these men and women over whom Rulah reigns actually mixing. Perhaps they reproduced asexually, with the males budding.

————————————————————
*One exception has been amongst the Jewish people. There the reversed asymmetry seems to have been from their wives so often having been raped by outsiders that a child could only be assuredly descended from a Jew were the mother assuredly a Jew.

As I got here late, I can only comment on one thing: there's a big mismatch between the art and the story. Rulah calls the harpies ugly while they are obviously basically exactly here with different colored hair and bat wings.

One wondered if the artist -- and boy those panel borders are distracting, please cut that out -- read the script which read "horrible snake-mouthed withered crones with bat wings" and said "eh, I'm drawing them as bikini clad sex pots."

Brian, and here is to artistic freedom! Huzzah!

Where were the editors of these publications to check up on errors like jarring differences between descriptions in the script and the artwork? Or were there editors? I read a story of Wallace Wood (from collaborator Harry Harrison) grinding out his cigarette on Victor Fox's desk for the purposes of intimidating Fox into paying what he owed. If I hadn't read that I'd think of Fox's operation as just a maildrop where the Iger artwork was delivered. As it is, if Fox used an editor he was probably not very effective.

And the revelation of Thurmond fathering a child with his African-American mistress was probably not that unusual amongst Thurmond's social group, where several of his friends and colleagues were most likely doing the same thing. It was winked at, even in a zone of otherwise total intolerance for race mixing.

I failed to mention that in “Wings in the Night” by Robert E. Howard, Solomon Kane battles Harpies in Africa, who set-upon and kill a tribe of blacks. (Kane subsequently exterminates the Harpies.) Apparently the Harpies had indeed been driven to Africa by Ιασων.