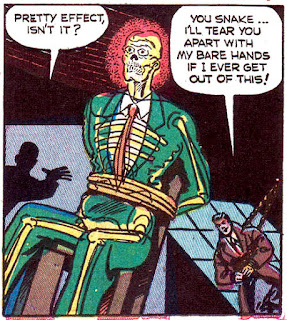 “The Man With the Mirror Eyes” stars private investigator, Detective Dareall. He gets a challenge from the villain, told to come to an address, and goes alone with only “two guns, for double protection.”

Another crazy story from the mid-'40s, resurrected by IW Comics reprints in Great Action Comics #1 (1958). It was originally published in a giant anthology, Gold Medal Comics, in 1945, and hero Dareall made his one-and-done appearance in comics. The name, Dareall, looks inspired by dime novels of the 19th and early 20th centuries, starring heroes with descriptive names like Fred Fearnot and Dick Dauntless. The Dareall story involves an extortion plot which describes to us readers “an old magician’s trick.”

The Grand Comics Database doesn’t credit any writer or artist, but artist Manny Stallman signed the splash panel. If the writer did anything more than this story I hope he or she got better. 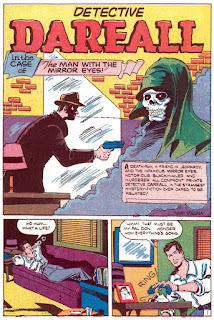 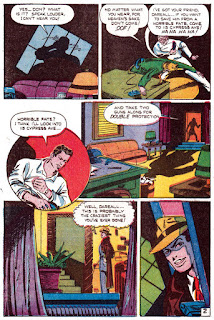 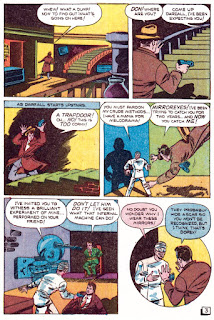 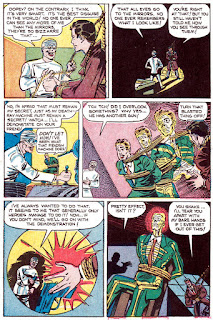 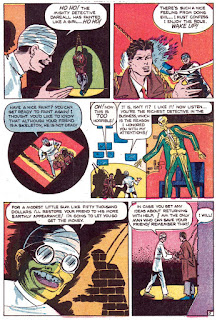 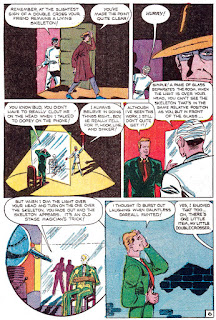 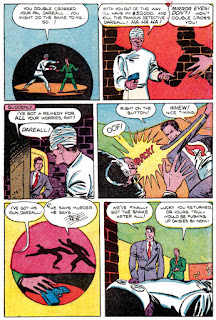 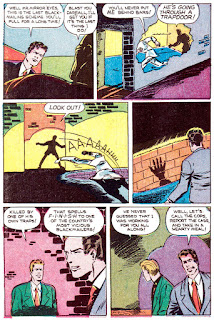 This story is "Right on the button!" if you like whacky —which I do. Artwork and coloring fun, too. If only the Marvel comic Dr. Doom could have been as fun as Mirror Eyes. Heh.

*laugh* I dunno. I have some suspicion that it were written with every intention of being as goofy as it is! Certainly the bit of the villain shooting the gun out of the hand of the hero and treating the complementary event in other popular heroic fiction as if it were reality was very meta. And the declaration about taking two guns for double protection reads like a joke. If the writer got better then the stories might be funnier.

Well, I liked Mirror Eyes, he had a fun look to him. And that's about the best thing I can come up with for this story!

The "trick" they are talking about (spoilers!) is the same one that runs the Haunted Mansion's ballroom scene, "Pepper's Ghost." I'm sure I won't be the only one to mention that! Also, note the way it's setup, it would NOT WORK. Yeesh.

Note: The writer made a big deal about Mirror Eye's ... er ... mirror eyes, and "how can he see" out of them. I suspect the reveal of the Pepper's ghost was meant to also be the reveal of how he can see through the mirrors ... which actually isn't the same effect but that's beside the point ... this thing really needed an editor!

Brian, so what you're saying is there's no chance I could duplicate the trick based on this comic book version? Dang. I was hoping to fool some folks.

So far you are the only one who mentioned the Haunted Mansion. I have never seen it, so that was new to me. Thanks for bringing it up.

Daniel, it was the name Dareall that hooked me. The story could be by a writer who was making fun of those old dime novel heroes, or it could have been written by someone who was old at the time, whose choice of literature in his youth were those novels.

Or it could have been by someone who was a magician or knew something about magician's tricks. I can think of a couple of actual magician-writers (worked at times in both comics and pulps), Walter Gibson and Bruce Elliott, but both of them were a lot slicker than the author of this story.

7f7, as someone who read The Fantastic Four in the Jack Kirby era, I was very impressed by Dr. Doom. Trying to even envision him as funny is impossible!

In the early '70s, I actually saw the mirror trick used by a 40-miler carnival act. A young woman was ostensibly transformed into a great ape. (One of the problems with the illusion was that the promotional paintings were from several decades earlier, with a different woman and different gorilla costume.) Anyway, as Brian says, the setup shown is very wrong. One needs a semi-reflective sheet of glass at about a 45° angle to the viewer. As a light behind the glass is dimmed, the glass acts more as a mirror; as the light is brightened, the glass acts more as a window.

Pappy, you are right about Doc Doom. I do seem to remember, vaguely, a parody version of the character in the short-lived, 1960s Marvel comic series, NOT BRAND ECHHH!, that had Doom more like Mirror Eyes. But after all these decades, I could be remembering amiss.

Mirror Eyes is just a little like Dr. Doom with some generous funny.

7f7, Marvel did spoofs on all their characters at one time or another, as I recall, even Dr Doom.

At 14 or 15 years of age I thought Dr Doom's costume with that iron mask and cloak was really NEAT-O, KEEN-O! At the same time I saw some Golden Age Captain America comics with the original Red Skull. Kirby did have a way of drawing dramatic villains, and to this day, of them all, Red Skull and Dr Doom are my favorites.

Daniel, aw, shucks...I thought there was magic involved. Not some carny trickery (snort)!

Thanks for the explanation. I will refuse to be duped should that trick be tried on me.

Stallman did a lot more than this one, including romance and horror, the Raven for THUNDER Agents, and the Big Boy comic book. He was around for a long time.

I think its sad that Daniel dont beleev in tha HooDoo yo :(