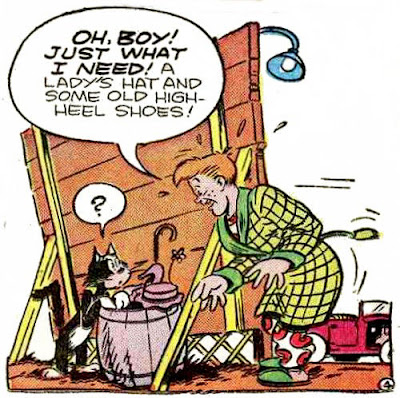 Natch Kilroy is a growing teenage boy. We have shown before, in Pappy's #1698 that Natch has an as-yet unformed teenage brain, with years left until he is fully mature. Along with an undeveloped brain, teenagers often don’t get enough sleep, which can lead to bad decisions, like jumping out of bed and going out in pajamas to rescue a pal.

I love The Kilroys, a comic drawn by Bob Wickersham for ACG. “Wick,” as he sometimes signed himself, was an animator moonlighting at ACG’s line of funny animal and teenage Archie-style, comics. The stories are situation comedies featuring the Kilroy family, Mom, Dad, Sis, Natch, and Natch’s pal, “Solid” Jackson. A theme that showed up occasionally in these comics had boys wearing women’s clothes. Guys in women’s clothes...ha ha ha. Very funny. Like Jack Benny in Charley's Aunt. No sexual or identity confusion here, folks! 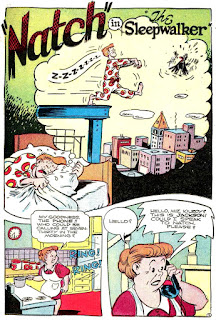 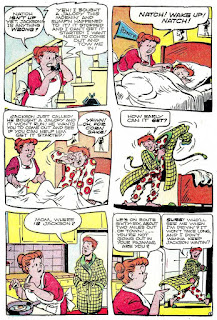 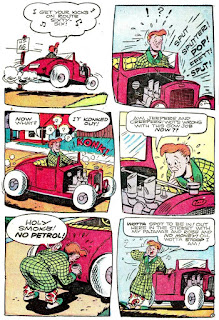 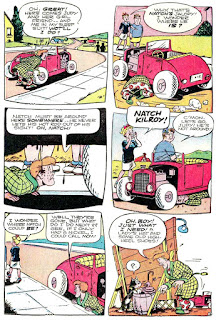 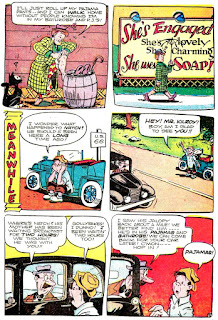 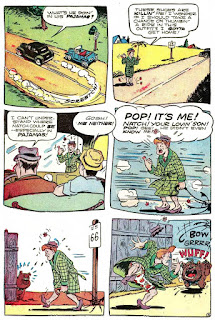 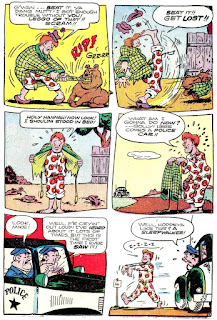 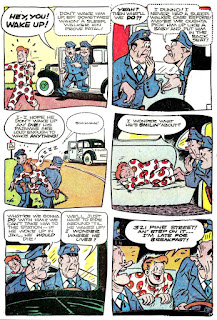 "I shoulda stood in bed!" In this odd old phrase, is "stood" a corrupted pronunciation of "stayed"? And did Americans ever call gas "petrol"? I thought that was just a British thing.

Ryan, according to "The Straight Dope" online, one contributor said this:

"Amazingly enough, we know exactly when and by whom this phrase originated.

"Legendary sports reporter Shirley Povich (yes, Maury Povich's father) quoted fight promoter Joe Jacobs (the picturesque character who also coined the phrase 'we wuz robbed') when he got out of a sickbed to attend the 1935 World Series between the Tigers and the Cubs on a wet, cold and windy October day. When Povich (or some other reporter with Povich) asked him what he thought of baseball, he replied, 'I should have stood in bed.' Povich wrote that into a column and the phrase immediately became famous.

Various commentators have said that 'stood' for 'stayed' is Brooklynese, and Leo Rosten used it as an example of Yiddish, either one applicable to Jacobs."

Using the word "petrol" for gas is probably just being funny, trying to sound British.