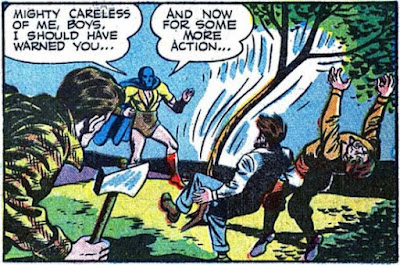 The original Atom was a second-tier costumed hero for DCs. The Atom is a small guy who worked out and pumped up his body, then put on a costume to battle crime. The art in this story, from All-American Comics #71 (1945), is by Jon Chester Kozlak, and is written by Joe Greene. In addition the Grand Comics Database tells us the editors are Sheldon Mayer and Julius Schwartz.

Anyone who knows the Atom in his 1961 incarnation knows the two characters have nothing in common. The second Atom can make himself small and retain his mighty wallop. I have said that DC used the old name, but appropriated the powers of Doll Man. Doll Man had been moribund since 1953, and then the publisher, Quality Comics, was sold to DC in '56. Doll Man was a direct influence on the modern Atom, but at least they owned the rights to the character they were swiping from. As it turned out, Doll Man did show up in the DC Universe again, but that isn’t a concern here. 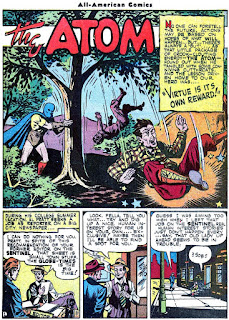 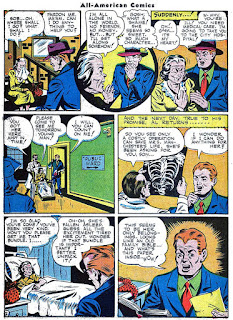 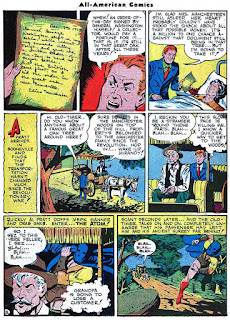 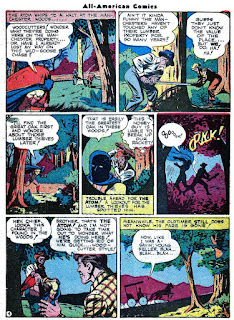 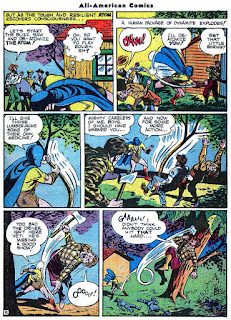 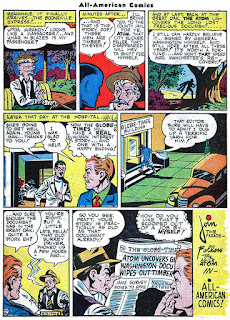 A nice story, I like its pace and the humorous undertones.
So, this Atom is just an ordinary guy who puts on a mask and tries to help people with their ordinary problems. Works fine for me.
The question is: WHY does he put the mask on? I actually thought about it while I was beginning to write my comment. We are so accustomed to superheroes that at first I didn't realize he doesn't have to dress up to be heroic. But he does nonetheless.
This involves psichology, I think.
Who is Jane Gurney?

The Atom does have a super power -- super coincidences!

I always get a kick out of it when someone in a golden age comic trails off with "Blah Blah Blah." Only in the GA could a writer get away with that.

The Al Pratt Atom actually did later get atomic powers and a new costume. But he couldn't change size like his successor. He did, however, have a godson who could grow larger and went by the handle of Atom Smasher.

Gil told me how the Silver Age Atom came about, & you're pretty correct. In addition to Green Lantern and various short stories in Mystery In Space & Strange Adventures, Gil had been drawing features for DC titles like Rex The Wonder Dog, All Star Western, Western Comics & Hopalong Cassidy. By 1961, all had come to or were coming to an end & Gil was staring down a big hole in his schedule & income. Julie had successfully relaunched The Flash, Green Lantern & Justice League Of America, & Gil felt he'd be open to another superhero revival. DC in the '50s obtained the rights to most of the Quality Comics properties (& continued publishing Blackhawk &, briefly, Robin Hood, as well as some of the war & romance books) & Gil was a big Lou Fine fan from way back & he liked the challenge/opportunities of scale the character presented, so he pitched Julie on reviving Doll Man. Julie wasn't thrilled. So Gil appropriated the Doll Man gimmick & applied it to a revamped Atom. That Julie liked. (I suspect because the Atom was a character he had edited in the Golden Age.) Gil designed a costume. Gardner Fox was brought on to help flesh out the concept, & Murphy Anderson as primary inker, & the rest is history.

So, yes, there was very definitely a Doll Man connection to the Silver Age Atom.

Steve, thank you for affirming what I have long suspected.

I appreciate this kind of behind the scenes look at the business of comic books.

P.S. I also think they were wise not to use the name Doll Man. It worked in the forties and fifties, but might not have worked in the sixties.