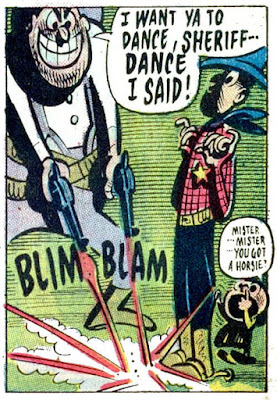 When I look at the Pot-shot Pete stories in Toby Comics, I see Mad a couple of years hence. The editor at Toby Press* bought at least three 5-page slapstick Pot-shot Pete adventures from Harvey Kurtzman, who wrote, drew and lettered. Kurtzman even borrowed a couple of them back to run in Mad.

The original art was auctioned by Heritage Auctions, and went for  $46,605, undoubtedly much, much more than Kurtzman earned for drawing it.

There is at least one more Pot-shot Pete page that was published by DC Comics, first in Jimmy Wakely #4 (1950), reprinted at least a couple of times over the years, including this appearance from Blackhawk #143 (1959). 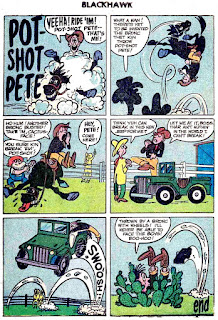 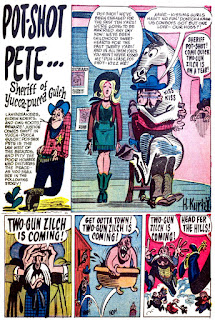 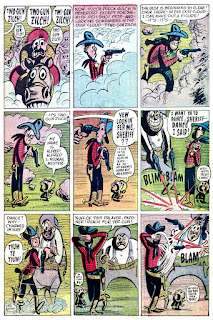 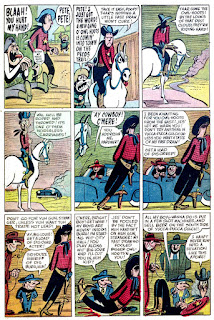 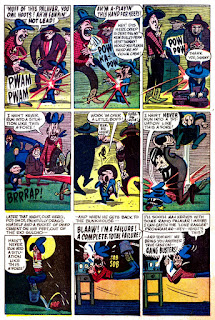 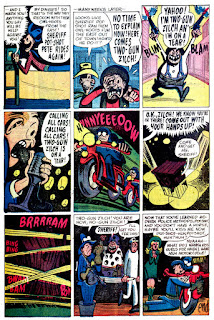 *Was it Mell Lazarus, of the future comic strips, “Miss Peach” and “Momma”? He was an editor at Toby for a time. Lazarus also wrote a novel, The Boss is Crazy, Too, about the comic book biz. Lazarus died recently, on May 24, 2016.
Posted by Pappy at 12:01 AM

Lovely art. The humor is a little lame, I think.

Pot-Shot. Wonderful slang.
At first, I thought it had something to do with drugs ("I took a Pot-Shot, man, I'm stoned"), but it's an entirely different meaning ("inaccurate criticism").
A "shot" is not something you "smoke", if I get it right.
You can say "a drug shot", but it's way more tragic than weed.

I'm sorry for the death of Mell Lazarus. Though it was not my favorite strip, I used to read "Momma" as a kid.

J D, from one of those Internet dictionaries, defining "potshot": 1 : a shot taken from ambush or at a random or easy target. 2 : a critical remark made in a random or sporadic manner.

Like much slang, some of the definitions depend on the context, and some on the time or era from which it is taken. Phrases and slang evolve. I had never seen a definition of "potshot" (no hyphen, as in Kurtzman's version, which is old-fashioned) but I thought of it as a shot taken wildly, without aiming, hoping to hit something.

I never thought of it as being from ambush or at a random target.

That aside, I don't remember the first time I heard marijuana referred to as "pot," but then I was a bit naïve on drug talk until the mid-to-late sixties. I've never understood why "pot" refers to a drug.

According to The Shorter Oxford English Dictionary and other sources, “pot” is probably from Spanish “potiguaya”, meaning marijuana leaves.

The word comes from potacion de guaya, a Spanish alcoholic drink in which marijuana is steeped like tea. If you want something to make you giggle, Kurtzman is much better than pot.

The thing is, the jokes aren't all that funny here, but the setup is. It's almost fully formed Kurtzman in layout and delivery, it just doesn't click, but is still wonderful.

The avoiding the woman and kissing some object is a joke Kurtzman went to a lot, as I remember.

The last couple panels where he's still in the cement bucket? THAT is comedy gold, and so very much Kurtzman. I've never seen this, thanks for this one, Pappy!

OMG Pappy tha book wich inspireded our newest album hit #1 on tha Amazon charts 4 its type of book yo OMG its probly cuz Deb revued it on Vine yo https://vine.co/v/i07Qxv0zDtP Dr. Kastrup is our spirituel leaderer, he is 2 Those American Girls wut Dr. Byrthfood was 2 DEVO!!

Alicia, Deb, having read the synopsis of Dr Kastrup's book on Amazon, apparently Deb is a much deeper thinker than me.

Daniel, Russ, I can see that "pot" could be taken from both those words...and maybe "tea," referring to marijuana, from the drink Russ refers to.

Brian, as a longtime Kurtzman fan (I consider that finding a copy of The Mad Reader in 1956 changed my life) I tend to overlook his weaknesses, and admit my blatant bias toward him. I believe all of his funny toon work up to Mad seems to have been leading in that direction, and that includes his work on Hey, Look!" also.

I agree with Russ when he says that Kurtzman is much better than weed if you need a laugh, but not in this particular story.
As Brian says, it just "doesn't click" (to me, at least).
Usually, his work is so good that this appears to be, well... just not that good.

Never heard of Bernardo Kastrup before. Glad if his book can be of some help to someone. I'll stick to Giacomo Leopardi, and possibly Erich Fromm.

Well, that and the fact that marijuana was often sold as dried leaves-n-buds in little baggies, just like tea. But somehow I like Daniel's etymology better. It just feels streetier to be on a first-initial-basis with a chemical.

Thanks for the great Kurtz(stick man), Pappy! My all-time fave (well, along with Bodē) from a very young age. This stuff never gets old.