Number 1893: The Jaguar and the Fourth-Dimensional Force 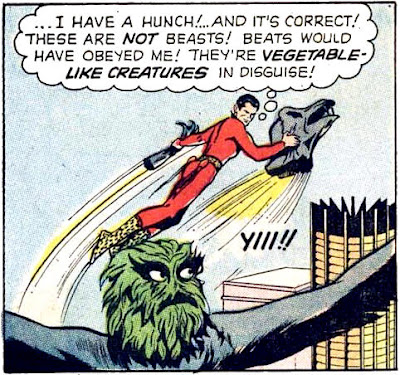 The Jaguar was a character who, as Toonopedia says, was basically cut from the same cloth as the Fly. They were both published by Archie in another attempt to introduce some superheroes into their line.* I didn’t buy The Fly after Simon and Kirby left (and especially when the Fly became — ugh! — Flyman). I bought a couple of issues of Adventures of the Jaguar, but probably because they had pretty girls on the covers.

John Rosenberger, who drew the feature, was not an artist I associated with superheroes. Robert Bernstein, who created and wrote the Jaguar stories, was a journeyman scripter who wrote a lot for DC. And in reading this story from Adventures of the Jaguar #3 (1961), it has some of the same genial goofiness I expect in DC Comics of that period. 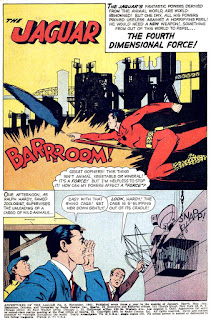 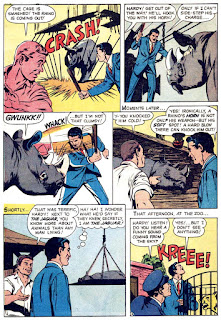 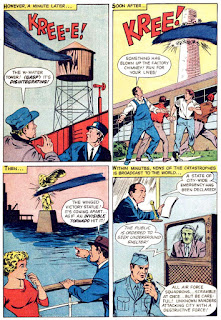 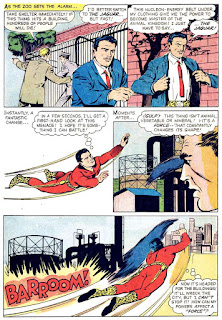 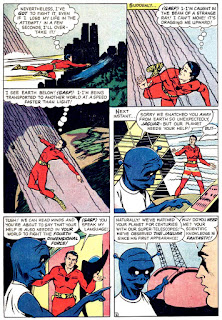 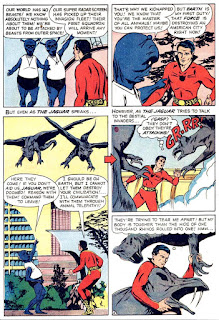 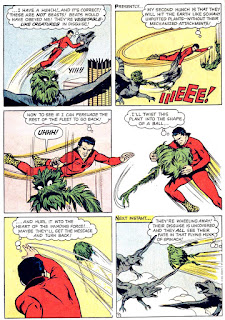 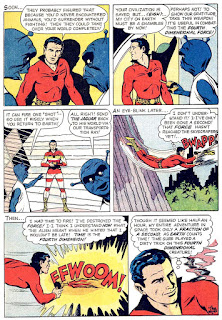 *I haven’t forgottten that when Archie Comics were born as MLJ Comics, their early line was made up of superheroes, including the Shield, the Wizard, Black Hood, Hangman, and several others. When they revived those characters as the Mighty Heroes in the mid-sixties I believe they failed because of the art, and presenting the characters as “camp.”

A fall like that shown at the start of this story would terribly injure a creature as large as a rhinoceros. As I note when explaining the impossibility of truly giant spiders, the strength of an object increases with cross-sectional area, while its mass increases with volume, which is to say that the thing becomes heavier faster than it becomes stronger. Mice can withstand very great falls onto soft ground, but a rhino dropped ten feet onto a dock might thus be fatally injured. Certainly it would otherwise need emergency veterinary care, not a clout to the horn.

Kinda grim fate for at least two of the vegetation creatures — one allowed to splat on the earth, the other twisted into a ball and then thrown to its doom. How did that get past the CCA? Oh, wait….

The Jaguar's powers and name seem somewhat thrown-together. He flies, he has super-tough skin, and he can compel animals to act as he wishes. I don't know of any cat that fits this description. (In fact, cat skin is far thinner than human skin, albeït that cat skin is protected by fur.)

I quite agree with you about the mid-sixties revival of golden-age MLJ superheroes. The art was stale. And, while I don't think that campiness would have worked, the presentation wasn't even real campiness; it was '60s sitcom with still fewer real jokes.

Probably, we all see our fate in a flying hunk of spinach —and this was written decades before The Gospel of the Flying Spaghetti Monster which has a distinct resemblance to the inner beings of these foes of the mighty Mr. Jaguar! (I wonder how Popeye the sailor man would have handled flying spinach monsters?) Hepcat Jaguar, too, as that panel you headed this post with intimates, Pappy: The "BEATS" would have obeyed him! We can dig that 1961 could have had some beat poets hanging out somewhere in Mr. Jaguar's unidentified American city, Pappy-o. Beatniks don't obey just any square... BWAPP and FFWOOM are sound-effects straight from coolsville, too. =smile= Don't mind me; I just try at some genial goofiness, too.

Daniel, I believe the concept of camp (if I interpreted it correctly in the 1960s) is that it is done unintentionally. Something is camp because it is done by uncool people, and assigned a coolness factor by cool people. So when Jerry Siegel was given the job of reinventing the MLJ superheroes as "camp" he was imitating camp.

Siegel had actually achieved camp, in my opinion, when he wrote the Bizarro stories in Adventure Comics a couple of years earlier. But again, that is my interpretation of camp...and I find some of these concepts as hard as trying to pick up Jell-o with my hands. It seems to change its nature the more I try to grasp it.

I remember Don Thompson in the sixties asking a question in his fanzine, Comic Art: Where does the Jaguar's mustache go when he becomes the Jaguar? Even at age 14 or 15, as I was at the time, I understood that it is all part of superheroics. If we accept that a guy can change into a superhero via magic then the mustache becomes part of that magical transformation.

Even though it's a goofy story there is some nice art there, ( in my opinion, ) from John Rosenberger.

Bruce, John R. was a good artist, but I just didn't think his art was right for superheroes.