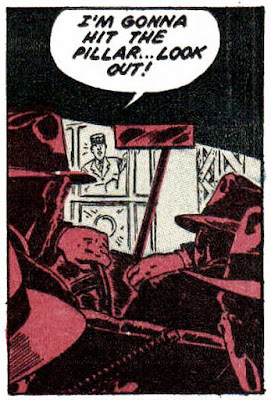 “Death Was His Partner” reads to me like a synopsis for an old B-Movie. Gangster’s girlfriend has taken up with a young lawyer; lawyer was mentored by older lawyer who has been in the pocket of the aforementioned gangster. It is all packed into six pages for Crime Files #6 (actually #2, 1952) from Standard. According to the Grand Comics Database it was written by veteran comic book scripter Carl Wessler.

The story is drawn by Nick Cardy, who is a favorite of mine for the work he did at DC over many years. Cardy, whose real name was Viscardi, began his career at Eisner and Iger alongside artists like Lou Fine and Bob Powell. He spent a long time at DC, where he did covers and drew Aquaman and Teen Titans. He died in 2013 at age 93. “Death Was His Partner,” while melodramatic, is drenched in period atmosphere. 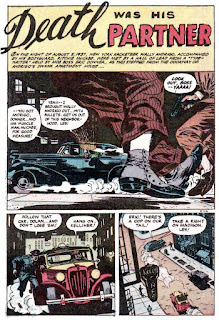 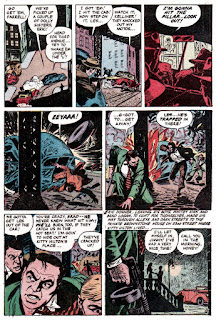 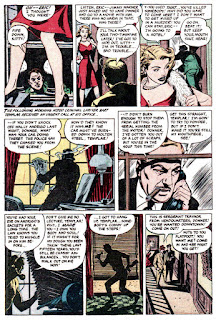 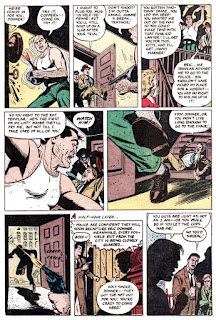 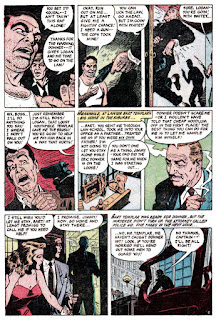 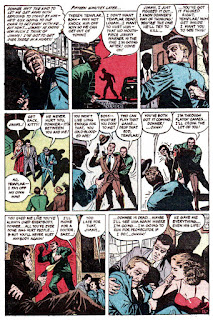 Here is a 1947 story by Cardy featuring the ever popular Señorita Rio. Just click on the thumbnail. 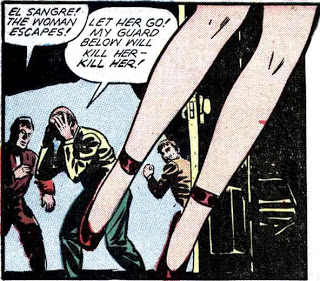 Misdirected word-balloons are usually a minor annoyance. Sometimes, they're amusing, as in 4:3. (Or maybe Kitty were a ventriloquist.)

I think that this story is pretty well-told. Not quite noir, as with only six pages there wasn't much time to labor the moral compromises made by Templar and by Kitty.

Templar needed a gun of higher calibre, something that could punch a bullet through two bodies.

Cardy was clearly on his way to doing the sort of work that I remember from the early bronze age. But he's here still drawing the woman as a glamor girl of the post-war era, and not as a teeny-bopper.

This and your other Nick Cardy posts have greatly impressed me. A splendid artist. I'm grateful to you, Pappy!

Very nice art by Cardy; he really filled most of the panels, and he was scrupulous in the details, even down to the line design on Donner's socks. My only question is, was this a true story, or based on one? Almost everyone has a full name, and Wessler is careful to mention lots of details in the captions. Unusual for a fictional comic story, unless the point was to give the impression of reality. Anyway, nice, tight little yarn.

7f7, I haven't mentioned that Cardy was the cover artist at DC for awhile. He also drew some great gorillas. Check out Pappy's #728 which featured four gorilla/ape stories, one by Cardy.

Ryan, unlike crime comics that use the word "true" — no matter what the real truth is — that word was not used here. I assume it was just made up for the comic book.

Daniel, I see your point. I had to read that panel a couple of times before I saw the tail was pointing at the wrong character. If the letterer drew the balloons while having the script in front of him then he screwed up.