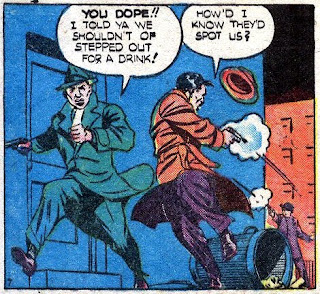 
This is the first post of our Crime Does Pay week: 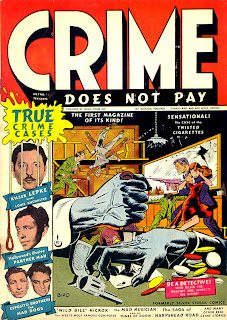 When publisher Lev Gleason allowed editor Charlie Biro to transform Silver Streak Comics into Crime Does Not Pay, it may have been the most audacious act of comic book publishing since Superman appeared on the cover of Action Comics #1 and created an industry. If other publishers noticed CDNP they didn't immediately act on it, but in a couple of years when covers of that comic started boasting 5,000,000 Readers Monthly! others sat up and took notice. By 1947 and '48 crime comics were flooding the newsstands.
Comics, already under fire for being lurid and subliterate, really took some sizzle from the critics, in heated outrage over the subject matter. Some of the gory and violent stories I'll show this week will demonstrate to you why they were so unhappy.
Biro's first Crime Does Not Pay story, shown here, was well illustrated by comics vet, Harry Lucey, who went on to Archie Comics. Biro was no stranger to controversy because he knew what sold, and that was blood! CDNP began in 1942, a very bloody year internationally, as the United States entered the World War on two fronts. Crime on the homefront seemed tame by comparison, but not after the war when there was a growing concern over juvenile delinquency and the causes. Some knew the causes of kid crime...it was those dirty crime comic books, turning our children into little crooks; four-color pulp monstrosities luring the kids right onto the fast track to the electric chair!
"Crime Kings, the Real Story Behind Lepke, Mad Dog Of the Underworld" is reputedly the true story of Louis "Lepke" Buchalter. As I've said before when introducing these "true crime" stories, the word "true" is a floating concept in comics. If you're interested, you can read more about Lepke. 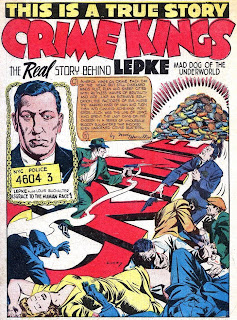 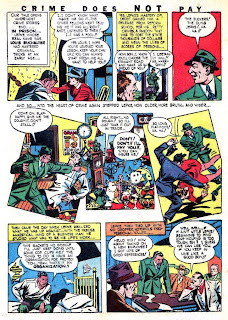 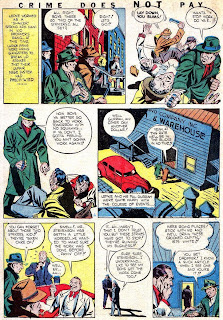 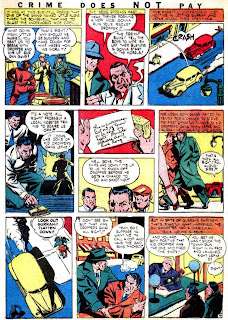 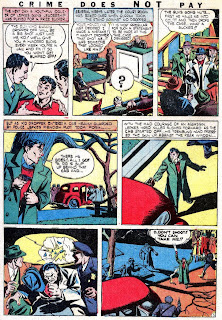 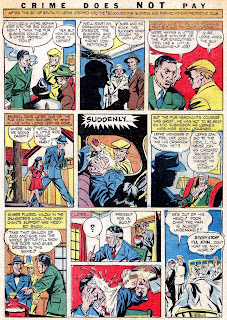 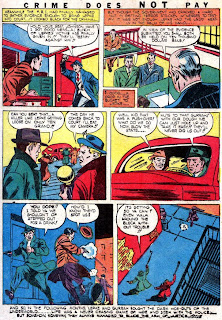 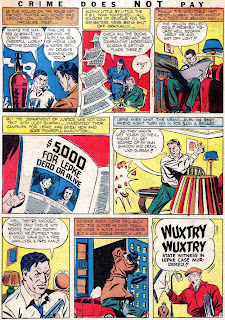 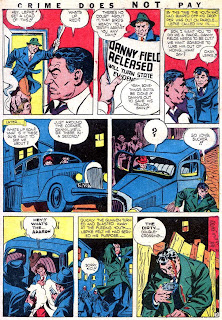 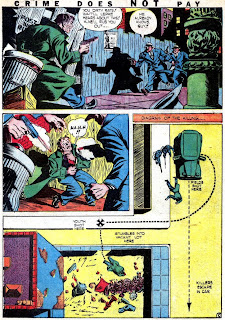 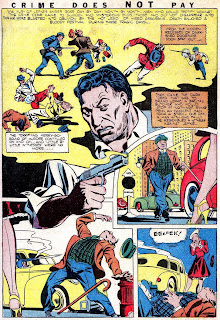 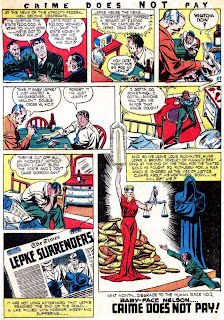 ***********
Marshall McLuhan studied and wrote extensively on mass culture. In his book, The Mechanical Bride, a collection of essays published in 1951, he included several chapters about comics. He leveled his observations on Crime Does Not Pay, both the comic book and the saying, which in the first paragraph he calls a "weasel maxim."
McLuhan reproduces one of the stiff-sounding (and obviously rewritten) letters from a CDNP reader, who was "reading a comic book in study hall," and was caught. McLuhan, aware that comic books were popular and had taken the place of traditional reading material, sarcastically opines that in order to discourage such books, why not test students regularly on the contents?
He also goes into a description of a typical, hypocritical CDNP story, which pretends to give a moral lesson while really just providing the thrills of criminal activity. He states, "Kids crave morality until they are old enough to see the deeper justice of mom and pop trading loves with weekend guests in a last bid for happiness." That description of wife swappers/swinging makes me wonder if it says more about McLuhan than it does about kids who read Crime Does Not Pay.
As McLuhan admitted in 1951, crime does pay, if the right person commits the crime. What we've seen in the last couple of years, unbridled greed and malfeasance in financial markets, is an example of how, even if just in the short term, crime can pay a lot. Or in another sense, consider the producers of popular entertainment, like any of a number of popular TV shows and movies, and how lucrative it is to show crime. A producer of the TV show CSI said that at any time of the day, somewhere in the world, CSI is showing. That's putting a lot of money in the hands of people who are giving much more of a vicarious thrill from crime than comic books ever did. For them, crime not only pays, it pays residuals. 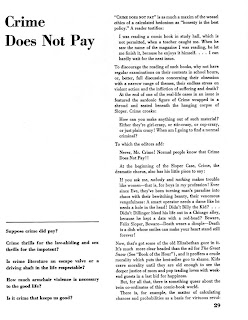 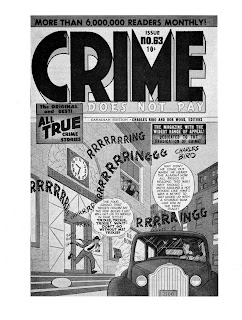 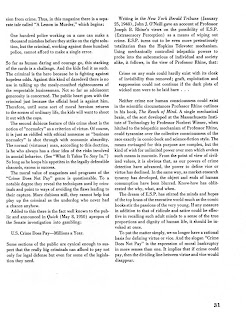