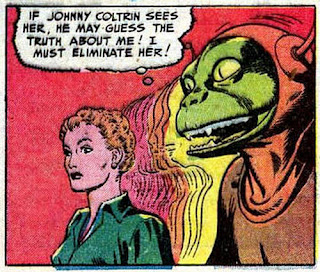 
Science Fiction Week at Pappy's concludes with this well done but familiar Gardner Fox-Dan Barry story from Strange Adventures #3, 1950, "The Stranger From the Stars."

It's familiar because of the elements, a shape-shifting alien masquerading as human, and the threat of nuclear weapons being used on American cities. On August 6, 1945, 65 years ago today, the world found out the theory of atomic weapons had become reality. By the time the cold war set in Americans were feeling vulnerable to nukes being used on us. The plot device of nuclear bombs planted in cities, poised to go off, has been used so much it's hackneyed. And yet it's a genuine threat. Not like shape-shifting aliens.

I could go on and on about aliens looking like humans. How many times has science fiction used that particular device? It reaches down into our primal fears. How many people have had a whiff of paranoia--or even full-blown and delusional--and thought they were the only one who is "real"?* Scientifically it's nonsense, but Fox gives a stab at an explanation in this story as to how the alien does it.

The artwork by Dan Barry is what I'd expect, great. Barry had a very slick style and used comic books as a stepping stone to syndicated comic strips. 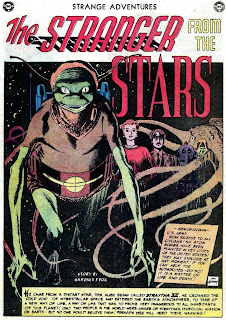 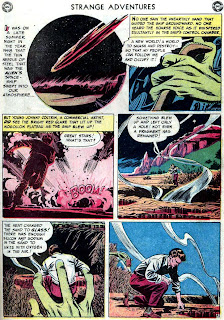 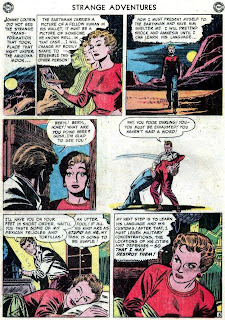 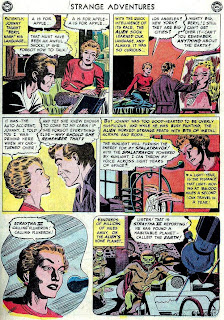 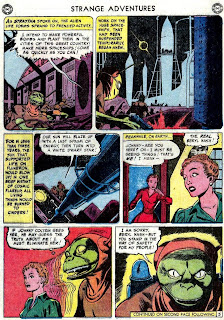 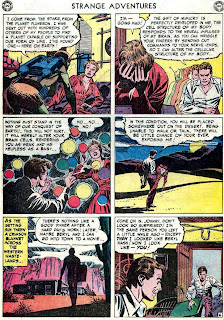 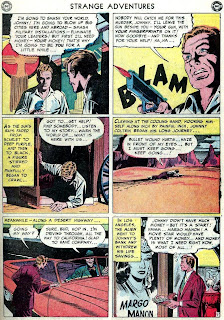 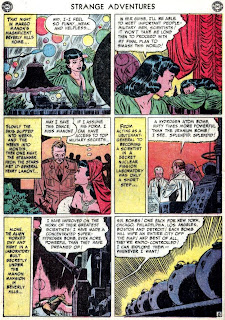 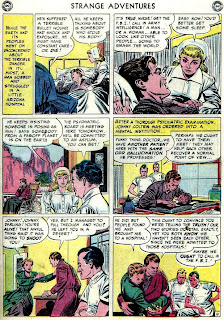 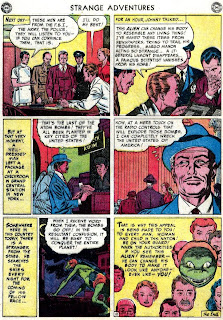 *And that would be me! You're all aliens pretending to be human, aren't you? I'm the only one who's real.

As a fellow commercial artist, I must admit that extraterrestrial infiltration has been a recurring problem in our field. Fortunately, we are trained professionals who know what to do in such situations.

And real-life Flunerons aren't especially bright. They don't know how to land on our planet without exploding their spaceships and leaving huge craters.

In my instance, the alien impostor stole from my pocket what he thought was a snapshot of my girlfriend, but was actually an old She-Hulk trading card.

Initially, I played along with his impersonation. But when he tried to run up a huge bill at Radio Shack with my Discover card, I kicked him out.

I stashed one of his atomic weapons under my bed as a keepsake. You never know when it might come in handy.

BEMaven, if I gave out awards I've give you one for this note. Maybe I could dig out an old She-Hulk card somewhere...

Michael, I haven't killed anybody all week, although my trigger finger is itching...but no, I won't kill you.

Pappy: Man, what gorgeous art. "Slick" is the word; and with a polish so smooth in practically gleams. Great post.