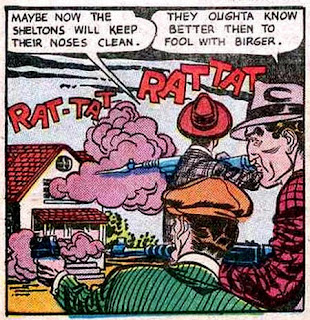 Number 787
Crime Does Pay Week: Charlie Birger and the Birger-Shelton War
This is day two of Pappy's Crime Does Pay Week.
According to the Grand Comics Database this ultra-violent example of the art of the crime comic is drawn by a young Gil Kane, published in Murder Incorporated #1, in 1948. Victor Fox was the publisher, and his books of this era almost single-handedly define sleaze.
As for the actual comic book, the story has some element of truth; there was a Charlie Birger, and he did have a war with beer rivals, the Shelton brothers, in Illinois during Prohibition. They did use armored cars, and did use a plane for an aerial attack. Something not told in the story (nor told in another version in Atlas' All True Crime #28, from later in 1948, either) is that before they went to war, Birger and Shelton were partners in the beer biz during a time the Ku Klux Klan was heavily involved in the area. The KKK had decided Prohibition was a good thing. It was so lawless there that KKK members would go into private homes looking for alcohol, and take offenders to a special Klan jail! Between Birger and Shelton they managed to push the Klan out of the area, maybe the only time in the sorry history of the sorry-ass Klan that the tables were turned. 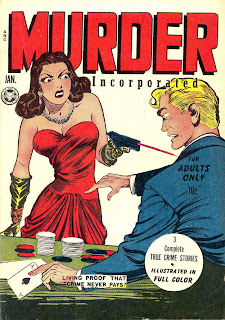 The cover of Murder Incorporated #1, artwork attributed to John Forte, has a cover slug that says For Adults Only. How much do you think that mattered when a kid handed over his dime? 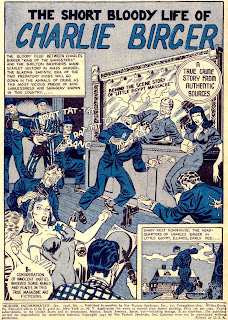 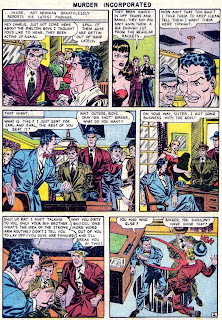 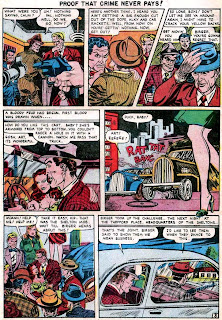 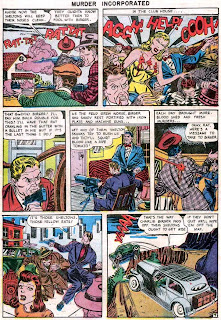 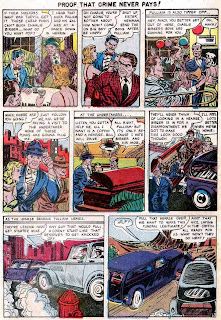 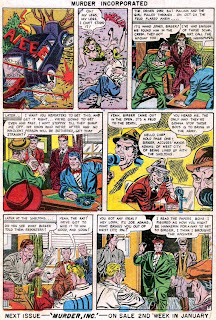 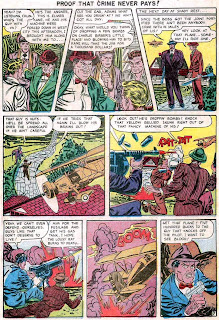 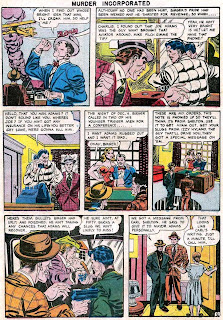 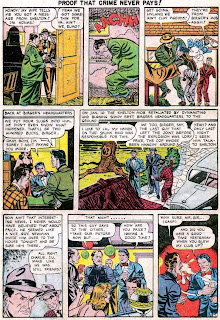 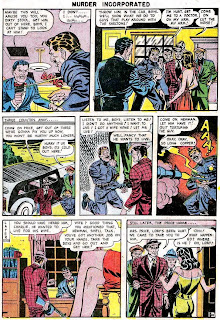 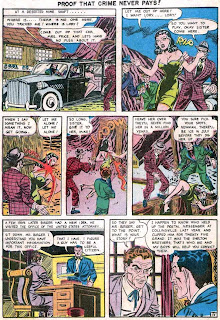 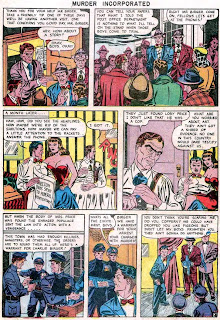 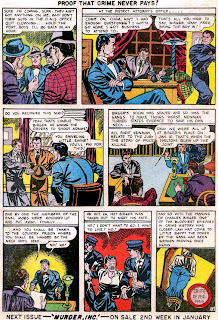 In many of the dialogue balloons, I was surprised at the conservative use of exclamation marks.

In case there are non-comics fans looking in and wondering why the topic of exclamation points would come up, it's because comic books generally use them! It's probably because in the early days the printing was so bad! Sometimes something as small as a period wouldn't show up!

It's one of those traditions that comic readers take for granted, but can be quite annoying when you start to notice how many are used.

Thanks for bringing it up, Michael. I hadn't noticed it in the speech balloons for this story, but now that you mention it...

In a more general sense,, since we're talking about speech balloons, LETTERING IN ALL CAPS HAS BEEN THE NORM FOR DECADES. YOU WOULDN'T WANT TO READ TYPE IN ALL CAPS AND HAVE EXCLAMATION POINTS AFTER EVERY SENTENCE! BUT IT'S THE WAY YOU READ COMIC BOOKS!

We've looked at these for so long we rarely think about it.