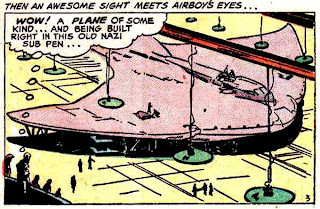 
It's day two of the Un-Super Heroes Week: comic heroes who make it without super powers.

Hillman Publications, publisher of Airboy Comics, plus some genre comics (mainly crime) threw in the towel on its comic book line in 1953. Airboy ceased publication with Volume 10 Number 4, dated May, 1953. The stories I'm showing here are from the penultimate issue, Volume 10 Number 3. By this time Davy Nelson, the Airboy of the title stories, looks older, more like an Airman. In the earliest issues of Air Fighters Comics, which became Airboy Comics after the war, Davy looked about 12, and here he looks about 22. He matured, breaking the comic character law of always being the same age, even if the character is around for 60 or 70 years.

The artwork is by Ernest Schroeder.

Publisher Alex Hillman, who was described in a 1944 Time Magazine article as "bulbous and balding," was a political conservative. After he grounded Airboy and the other comics, he continued publishing Freeman, a right-wing magazine. The editors couldn't get along and Freeman also crashed. Hillman's real claim to fame after publishing exploitation magazines, true confessions, true crime, paperback books and comics, was that he published Pageant magazine, a very successful digest-sized slick. In 1961 he sold it to his old publishing rival, Macfadden, who continued it until 1977. 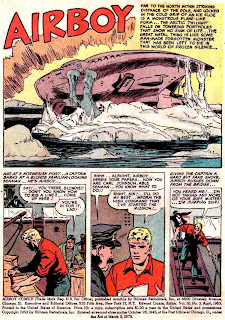 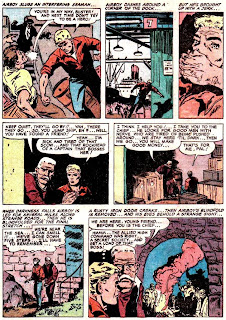 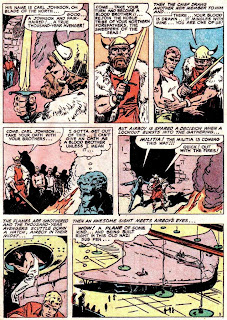 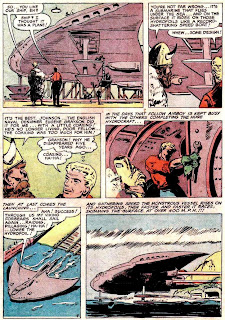 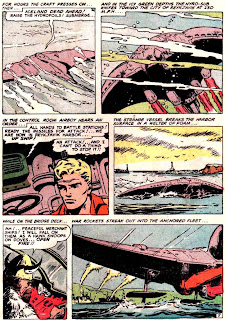 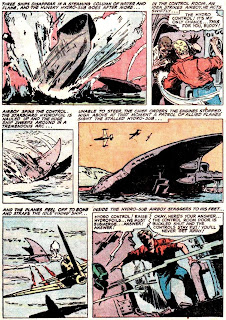 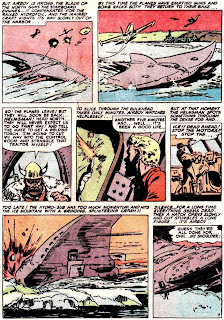 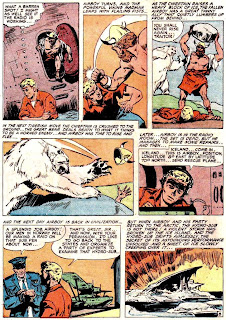 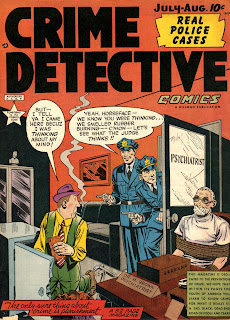 In Seduction Of The Innocent, Hillman's Crime Detective Comics #9, with a cover Dr. Fredric Wertham claimed spoofed him, was reproduced without the title cropped off. Only it and the cover of Reform School Girl are examples so clearly identified. Wertham, as I wrote last week, was a left-leaning liberal. This is pure speculation from me, just an opinion and read it as such: Maybe the ultra-liberal Wertham had a motive, a grudge against the ultra-conservative Alex Hillman. Tit for tat. You dissed me with this cover, I'll embarrass you by putting your cover in my book.

Though Wertham was liberal, he was probably a Republican; his complaint in SOTI about the "Story of Harry S. Truman" comic (drawn by Jack Sparling) was its not mentioning Tom Pendergast, the corrupt Kansas City "boss" who aided Truman's career. Since the comic was published by the Democratic Party, the comic would certainly not include Pendergast.

Pendergast was an embarrassment to the Democrats, having been convicted of income tax invasion in 1939, spending some time in prison. By the time Truman was sworn in as president Pendergast was dead.

For the sake of historical accuracy there were ties between this old-time political boss and Harry Truman, but considering Pendergast's notoriety not including them in a comic book promoting Truman doesn't surprise me.

Wertham, born in Germany, had become a U.S. citizen in 1927, but I don't know if he aligned himself with a political party.

Is The Story Of Harry S. Truman available online? I've never seen it.

If Wertham was liberal, G.W. Bush was muslim.

In late '40s thinking Wertham would have been considered radical, hanging out with known leftists and working with black people. As for the modern definition of liberal, I don't know if he fit that exactly, because in my lifetime of observation liberals and conservatives have shifted somewhat in their outlooks and objectives.

Richard Wright, the author of Native Son and Black Boy, an American expatriate to France, was considered a radical by the FBI, and Wertham was his friend. (See The Unfinished Quest of Richard Wright by Michael Fabre, published in 1973. Wertham's work against comic books isn't mentioned, but his social agenda is discussed along with his friendship with Wright.) He's become known to us for his work against comics, but he had a lot of things going on, including a strong stance on civil rights. Some of his work on racial segregation was used in Brown v. Board of Education, which ruled the "separate but equal" laws to be unconstitutional.

That he was a grandstander is indisputable. He liked to have his name out there, liked to publicize his books which had sensationalized titles like Seduction Of The Innocent, A Sign For Cain, and Dark Legend.

An interesting article about Wertham's career can be found here.

Airboy looks good in color, I've only seen this stuff in those late 80's black and white Eclipse reprints, of which I bought for the Black Angel stories... gotta love those kooky flyboy/flygirl comics.

I have those Airboy reprints from Eclipse. I thought they did a pretty good job reviving the character and bringing him into the '80s, too.

Wertham was an open minded liberal. He called me up in 1968 ordered a subscription to our fanzine Fanzation and got #3 4 5.

Fanzation #3 had a Ditko letter on creativity he quoted in almost its entirety in his last book The World of Fanzines 1974 which is well worth picking up to compare to SOTI.

In TWOF Wertham exonerates comic book fans that he was wrong re SOTI. he says so inside his last book, dying some months later, forgotten by most of the world by then in the mid 70s.

It is interesting to learn recently Wertham falsified his data in SOTI regarding his case studies. Some one compared his actual files in his papers at LOC (I think) to the innards of SOTI

Most all of Wertham's studies on comic book readers were done in his Harlem office. It would stand to reason he was friends with a guy like Richard Wright.

I did not know this and am always delighted when I learn something "new" each day. This is the tid bit for today -:)

Bob, another story I read about Wright and Wertham was when Dr. W. accompanied Wright to visit a man in a local prison. When brought into the prison Dr. Wertham was asked to step aside, and then the guards searched Richard Wright. When Wertham asked what they were doing a guard said, "You know they all carry knives." Wertham was witness to the indignities that black citizens were subject to on a regular basis.

I read The World of Fanzines by Wertham when it came out (1973?) because Ronn Foss wrote me to tell me he had been contacted by Wertham.

I think what Wertham was extolling about fanzines was that they were part of a free press in a society that permitted such things.

Although Wertham came from Germany before the Nazi takeover, he was aware of the depredations of that crowd, including book burnings, and while Wertham fought against comic books as being bad for children, on the other hand he appreciated fanzines. But they are different things, aren't they? I did appreciate his acknowledgment that fanzines were basically wonderful for all kinds of
reasons. If he apologized to comics fans I don't remember it; I remember he was still using comic books as the villains in his book A Sign For Cain.