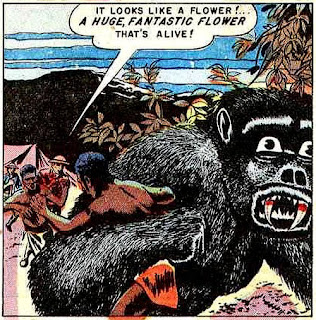 
Every once in a while someone writes me asking to help them identify a comic book story they remember from their past. I'm usually not much help. Sorry. There was a story from my own past I looked for, and no one could help me, either. In the early 1950s my best friend had a box of coverless comic books, and every once in a while I was allowed to look at them. I was just old enough to read, and I remember a strange story of a creature turning into a flower, and vice versa.

Thirty years later I ran into the story in Captain Science #5, from 1951. I instantly recognized it from the panels with the sequence of flower to monster, then monster to flower. I can see why no one could help me with the story, because it was in a comic book with two Wally Wood/Joe Orlando Captain Science stories, and this story didn't even register on anyone else's memory meter. The Grand Comics Database lists the artists for "The Flower of Death" as Bill Fraccio? and Vince Napoli? The question marks mean they don't know for sure. My observation is that "The Flower of Death" is the onion in the petunia patch...the pallidly drawn story you'd pass over in favor of the colorful, eye-catching Wood-Orlando bouquet.* For me it was a lesson about memory and perception. On that fun childhood day looking through a box of old comics it was this story that caught my attention.

*I'm posting the lead Captain Science story on December 14, one week from today. 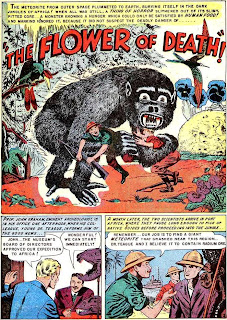 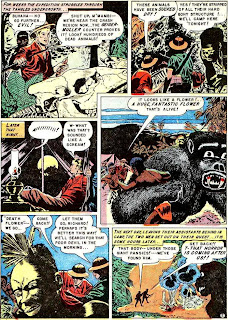 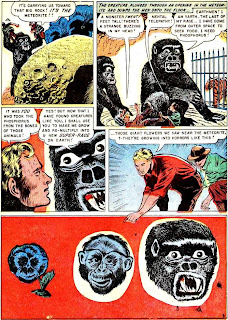 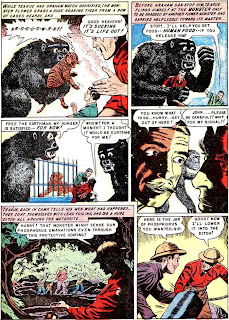 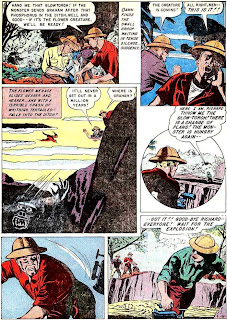 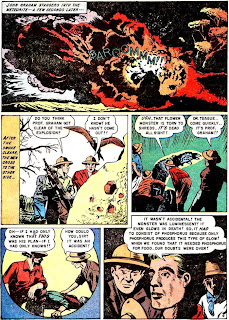 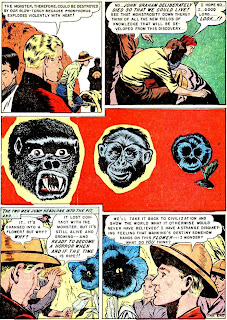 I can sure see why this story captured your attention. It is very unusual. It just goes to show.... sometimes the schlock sticks with us every bit as much as the masterpieces do~

While hardly a masterpiece, the art was better than most of the era. The explosion on page 6 is one of the better ones I've seen. The story seems to be let down by the inconsistent renderings of the faces more than anything. Thanks for posting this one.

I am a bit puzzled. Was the art done before the story? The bit about the monster looking like a flower and the "flailing tentacles" comment doesn't seem to match with the fact that the monster just looks like a big monkey.

I suspect that the story were written first, that the artist initially assigned to it wasn't able to complete the work in a satisfactory manner before such time as it were demanded by the editor or publisher, and that what we see here were hastily completed or reworked, probably with more than one artist involved.

It did make me think that I'd like some day to take two very different and incompatible stories and fuse them, using the art from one and the narration and dialogue from the other.

There was at least one movie on MST3K that did that: Monster-A-Go-Go. Two separate movies edited together in a way that made absolutely zero sense.

Mankind's destiny hangs on giant fanged monkey flowers? Why, everybody knows that!
If the Wood /Orlando stories featured a giant tusked gorilla, you'd remember those stories too. Something psychologically visceral about the ape creatures, just Wolvetonish enough to have that memorable, nightmarish quality to them. I loved the art on the creature and that close-up panel where they're whispering to each other. This post was a lost treasure!

Pappy~! This story explains why you wear 3-D glasses~! Lots of bold red and blue colors co-mingled in the monkey-flower patch~! You searched for so many years with vision enchancement, and it finally paid off~! "Re- united~ and it~ feeeels~ so goood~!"

I go away for a day and come back to seven cogent comments for a story I assumed would be ignored. Shows what I know, eh?

There's no doubt there is a connection between gorillas and comic book readers. DC noticed that covers of their comic books featuring gorillas sold more copies. There's some psychological meaning somewhere.

I have a feeling that Oeconomist is not far off in his assessment of the writing and art for this story. Also, I suspect putting captions and dialogue from one story onto another might not even confuse some readers.

Thought the much the same as others here regarding the inconsistencies between story and depiction - seemed like someone just wasn't paying close enough attention.

I can understand how such an oddball tale (I mean, giant pansy ape monsters?) would stick in an impressionable mind. Maybe not quite oddball enough for a Turkey Award but it'll probably stick in my mind for a long while too.

I am Yarth, the last of my race. These are other people... of... my.. race. Okay so I'm not the LAST last of my race. Stop being so literal, earth man! I'll get you with my invisible tentacles!