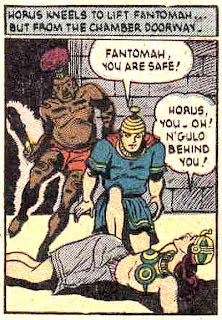 
Fantomah, Daughter of the Pharaohs

We've come to the end of Jungle Girl Week. I've saved my favorite for last, because Fantomah was such a strange character, jungle girl or otherwise. Fantomah isn't wearing the regulation jungle girl bikini, but then I told you last Sunday I kind of like those harem outfits. (Probably a result of sneaking peeks at the back pages of my mom's Confidential magazines in the '50s, with their alluring Frederick's of Hollywood ads.)

When I first showed a Fantomah story in Pappy's #116, taken from Jungle Comics #15, she was billed as "The Mystery Woman of the Jungle" and she looked like this:

But that was from a strip by the noted screwball artist, Fletcher Hanks, who I assume wrote it as well (his stories had a weirdness about them peculiar to him). By the time of this Fantomah strip in Jungle Comics #29, 1942, she was billed as "Daughter of the Pharaohs," and had apparently given up the skullhead look. I really don't know a lot about Fantomah except what I've read on the Internet, and you can check her out if you read this.

Artwork on this story is attributed by the Grand Comics Database to George Appel.

Hope you've enjoyed our jungle girl week. We had a six-day week, but I deserve a day's rest and I'll be back on Sunday.

Chuck Wells is also featuring jungle girls this week, so check them out here. 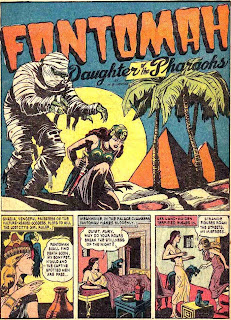 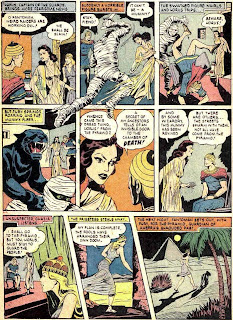 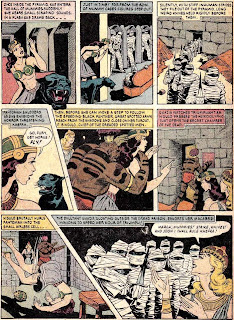 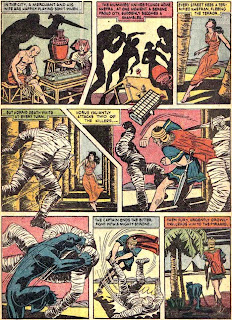 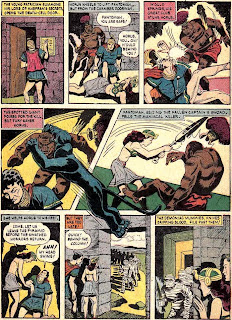 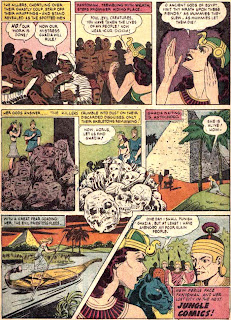 Thanks to everyone for checking in this week. I hope we can do this again sometime. Thanks to Chuck Wells for being a great sport and making it twice the fun.

This has been the sexiest comic book blogzine week ever! Thanks for all you're hard work Pappy, I always enjoy your blog.

p.s. I showed my own warm spot for jungle girls in this post of my blog. http://jeffoverturf.blogspot.com/2009/11/uncle-jeffys-sketchbook-v-40-jeffy-tv.html :)

None of the girls this week seemed to have belly buttons. What was it about belly buttons that made them so X-rated in the 40s and 50s?

It was a rhetorical question unless someone actually knew the answer. Your guess is the best explanation I've heard. Thanks.

Mr. Karswell said...
This comment has been removed by the author.
8:55 PM

So she finally just calls upon her gods on the last page and they answer--- geez, why didn't she do that from the very beginning before all her people were slain?!! Still a fun story, the mummies, though phoney, were cool as Hell looking.

The original, skullhead version of Fantomah is horrifying! Imagining her face transform from featureless and smooth to a death's head...dear lord...this will haunt my dreams.

Karswell: I always had that problem with Voltron, too. Why didn't they just start the fight by joining all together and using the big fire sword?

And regarding belly buttons: Mort Walker always told a pretty funny story about the King Fishers Syndicate censors no-noing all of the bikini panels he was throwing into Beetle Bailey at the time. They were very strictly taboo, but he was not about to compromise by drawing women without navels. Walker says there was one guy who used to cut the buttons out of each belly, every panel every day, with an X-Acto knife, before then sending them on to be printed. Waker said that censor had a whole desk drawer full of nothing but little dots of paper with little dots of ink.

It's a funny story, condensed here where the "desk drawer" becomes a labeled box. Details. But Walker's rebellion is awesome.

Ditto, thanks for printing some great jungle japes!