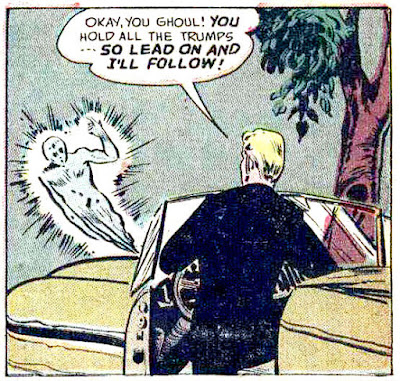 After having a ghostly encounter, our hero, Gordon, is led to the ghosts of Abraham Lincoln and George Washington, both telling him to turn over his formula for a super potent nerve gas to the U.S. Government. What could go wrong with that decision, eh? (As if nerve gas isn’t deadly enough in its original form.)

“The Unknown Ghost” is of its era, when it was unpatriotic to question the wisdom and motives of the government. Even so, had Gordon divulged to the powers-that-be in 1952 that his decision was made by listening to ghosts I think he would have found himself in a hospital for a mental evaluation. This is another of those oddball ACG supernatural stories which for its full effect is better read by you than described by me. 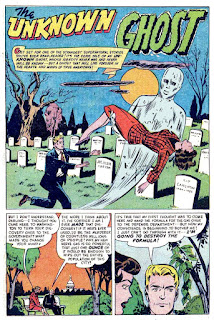 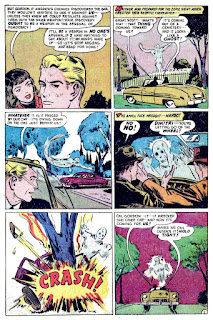 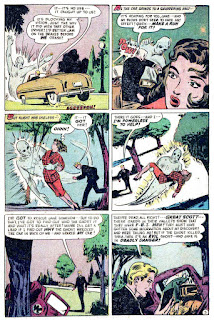 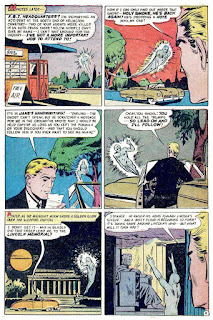 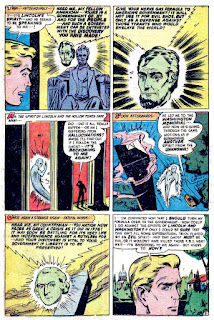 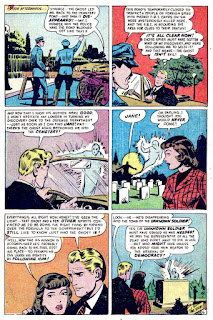 Email ThisBlogThis!Share to TwitterShare to FacebookShare to Pinterest
Labels: ACG, Lou Cameron, Out Of The Night

Cameron has a couple places in this story that have a real Ditko look to the art.

I'll skip the relentless propaganda in this and note one odd story beat -- why did the author reveal the enemy spies when they crashed their car (yes, a non-spy could have the name Dmitri, but this isn't the most subtle of stories) -- and yet have our hero call the FBI as if to setup the mystery if the ghost is "good" or "bad"? It's obvious to the reader! I suspect that it was done because if FBI agents were really trailing him, it would lead you to question the motives of the government. As I said, the propaganda was pretty heavy in this one!

Brian, which brings us to another topic, propaganda in the comics. Despite all of the hysteria at the time about comic books, I haven't read one comic that is obviously anti-American. They hit you over the head with their patriotism.

I remember those days, and the House Un-American Activities Committee. I also remember being taught in school we were always right, and anybody who disagreed with us was an enemy. The comics fell right in line during the fifties.

Cavin, can we talk? I didn't think of it for Thanksgiving because I don't know if I will still be doing Pappy's when Thanksgiving rolls around. Don't be alarmed. It will depend on whether my ancient 2003 software and 2010 PC hold up. If everything crashes at once I'm outta here.

Cripes, I'm completely alarmed. Let us all know if and how we can pitch-in. Unless, of course, you're looking for a clean break, a vacation, a retirement, etc. Lord knows you've put in a heroic amount of work (both here and elsewhere).

Don't quit, Pappy! You can get a nice refurbished computer cheap on ebay. Get one that runs the Windows you use now so you can run your old programs on it. My animation program is old, so I got an old but refurbished like new Windows 7 machine and it cost me I think $75. If that fails, there's always the public library!

Peter and Cavin, it's been a while since I got your messages, and I haven't gotten back to you about computers and the lifespan of Pappy's Golden Age.

My software is old because I started using it when I bought an eMachine in 2004 or '05. All the programs are compatible with Windows XP. In 2010 my eMachine was giving me fits so I asked my neighbor to put me in touch with his son-in-law, who is a computer repair guy. He offered to build me a custom PC with extra memory and double the number of built-in fans, because heat is the enemy of computers. Anyway, It is over 6 years now and I have not had any substantial problems with either my computer or my software. Even the guy who built it is amazed, and said it is unusual not to have some problems. So I have created a doomsday scenario in my head, wondering when te other shoe will drop. When will my hard drive crash? It will mean I have to start over again, WHICH I DO NOT WANT TO DO.

Who knows? This computer could die tomorrow, or it could go another few years. Maybe I could end up in the Guinness Book of World Records for longest lived PC, or tomorrow be kicking a dead tower while shouting curses.