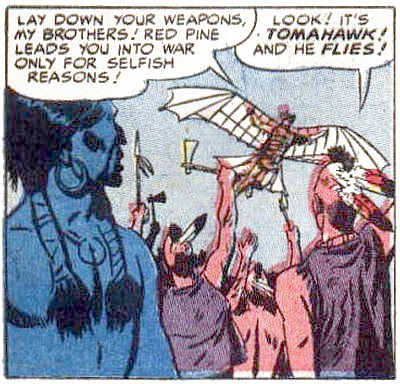 In the early years of his comic book appearances, Tomahawk, the frontiersman, and his young pal, Dan, traveled early America, heading off trouble with Indians and scheming white men. At least two of the three stories from Tomahawk #4 (1951) fit that description. But Tomahawk is a DC comic, and DC comics had to have a gimmick on the cover to lure readers. So the cover shows Tomahawk in flight, using a pair of wings designed by none other than Leonardo Da Vinci.

In later times Tomahawk went on to wilder and wackier adventures, including one with a giant gorilla (see link below). But the strip itself started off as a kind of Lone Ranger and Tonto or Batman and Robin adventure series set in the frontier of colonial America. Any resemblance to anything truly historic is immediately quashed by “The Flying Frontiersman.” I won’t even go into why this contraption strapped to Tomahawk would not work, because it is in a comic book, and in comic books stuff like that worked.

Nothing wrong with fantasy, but they should have labeled it as such. Maybe Tomahawk could have stumbled across a patch of mushrooms he mixed into a salad, and hallucinated the whole thing. But no, not in this comic book. Even for such straightforward 1951 balderdash, editor Jack Schiff, with his assistants Murray Boltinoff and George Kashdan, got even wilder and more off the wall as the decades advanced.

There is no guesses in the Grand Comics Database as to who wrote the story, but the art is credited to Bruno Premiani. 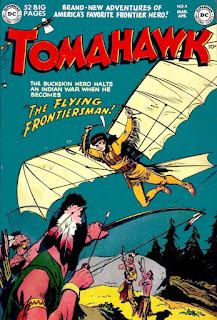 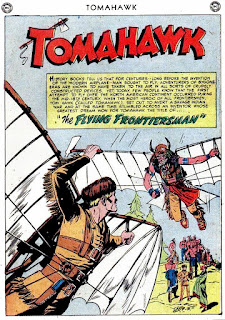 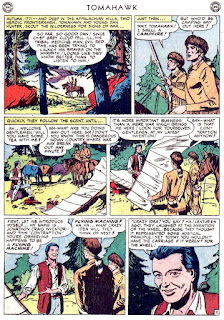 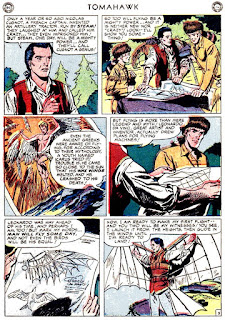 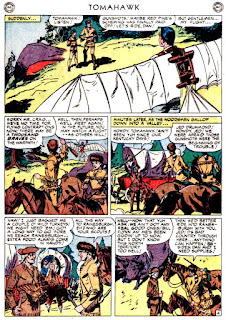 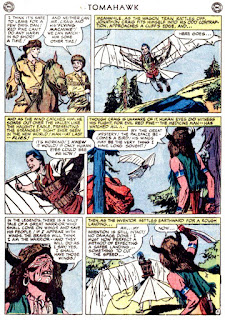 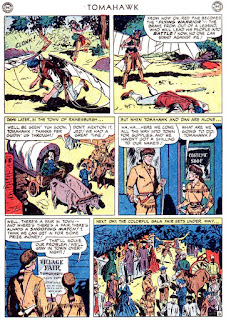 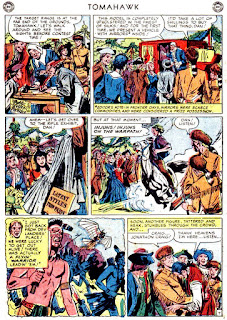 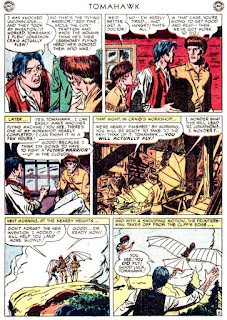 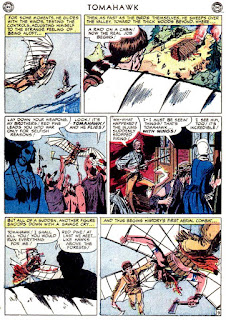 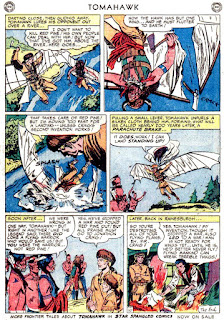 One of my favorite over-the-top Tomahawk tales. Just click on the thumbnail. 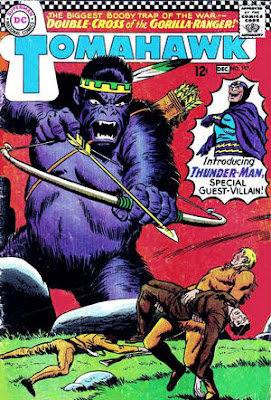 It would've been cooler if the hero had been an Irish-American named Tom O'Hawk. Get it? Speaking of names, the villain didn't have much choice but to be one with a moniker like "Evil Red Pine."

Sure, the whole concept of the flying contraptions is goofy, but at least the artist makes it look good. Premiani, who created great action for "Doom Patrol" (my fave team book), composed a cool panel at the bottom of page 9. So, I could handle the wings and the aerial battle, but that parachute break was just silly!

Apparently, the French disagreed with Craig's final analysis about humanity's lack of readiness for flight--only 12 years later, they flew the first hot-air balloon.

If you think this is outrageous, Pappy, you should see Paul W.S. Anderson's Three Musketeers movie of a few years ago, in which the characters flew around in blimp-ships. In the 1600s.

Ryan, you might know this, but maybe some other readers don't. Tomahawk's name is actually Tom Hawk.

At least the French understood the lighter-than-air principle with balloons, which is something that is ignored in this story. The contraption the inventor came up with would be too heavy. I can't imagine anyone in that era coming up with materials light and yet strong enough to cause a man to do anything but hit the ground hard if he jumped off a cliff with that thing on his back.

I missed that version of the Three Musketeers you mention. I would have noticed the blimps.

Like you, I also admired Premiani's work on Doom Patrol.