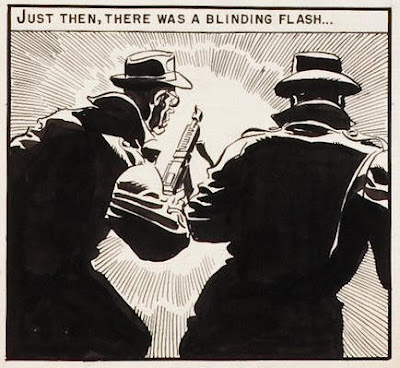 This is the fourth and last posting of our crime week.

“Faced with Horror!” was written by EC Comics publisher Bill Gaines and editor Al Feldstein, and drawn by Wallace Wood. My interest in showing it to you is not because of the weak story— the surprise ending is telegraphed and obvious — but the artwork by Wood, which overwhelms its flaws.

Wood (signing himself “Woody”) was coming to the top of his form as an artist. His work here is inspired by Eisner, for whom he was also working during this time. Looking at his original art, which was sold at auction by Heritage for $11,950 (cheap!) his drawings, drenched in black india ink, give the story a noirish look, imbued with a power the story probably didn’t deserve. But that was Wood. His personal story, told in the recent Fantagraphics book, The Life and Legend of Wallace Wood, Volume 1,* makes clear that at the time Wood was an obsessive, dedicated to his craft.

Scans of the original art are from Heritage Auctions. The story first appeared in EC’s Crime SuspenStories #3 (1951). 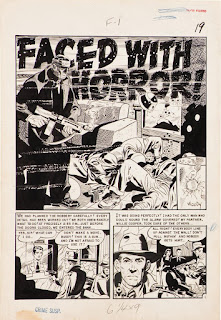 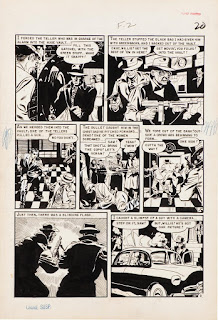 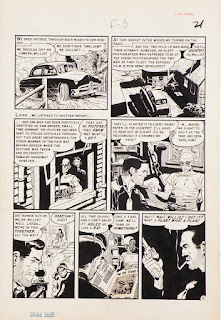 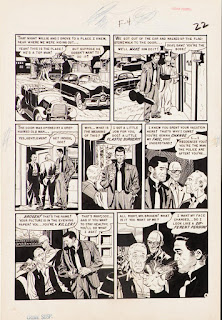 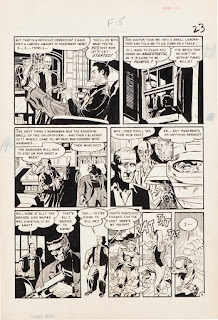 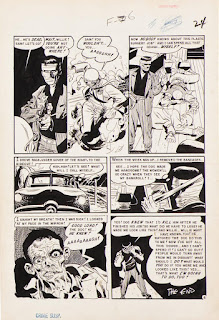 *Highly recommended!
Posted by Pappy at 12:01 AM

Hey, note the calendar on the bottom left panel of the 3rd page - "Tatjana" was the name of Wood's wife...

Wow! What a stunning eye-feast! The crisp lines--some of the panels look almost photorealistic--and the deep, Caniff-style blacks really draw you in, despite the cliched story and the god-awful dialogue (that first page is painful). The opening panel reminds me more of Jack Cole than anyone else. Some of the profile shots of Sam, with his cartoonishly sharp nose, show me what Dick Tracy interpreted by Alex Toth might've looked like, and the last panel of page 3 looks like a reverse Toth, with stark black instead of his signature white washout. And you're right, Pappy, about the Eisner influence, which is most obvious when the Doc is gunned down at the end of page 5 but also comes out in the stylized "The End." But there's also some distinctive Woody touches, like the busty pin-up calendar on page 3, obviously to inject something feminine into this testosterone-heavy story. I don't think I've ever read any of his straight-horror comics, but, judging by that last page, especially the penultimate panel that seems to predict the work of Bernie Wrightson, I bet they're good stuff.

How's my analysis, Pap? On target or amateurish?

OMG very Will Eisneristic yo!

Alicia, thanks for checking in yo!

Ryan, astute observations, definitely on target. "Some of the profile shots of Sam, with his cartoonishly sharp nose, show me what Dick Tracy interpreted by Alex Toth might've looked like" is especially well put.