Number 2003: Human Meteor: a bullet for the boy 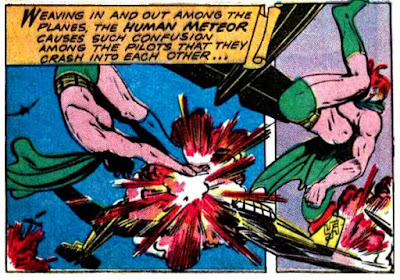 Human Meteor was another short-lived superhero of the early forties. He was a cab driver, Duke O’Dowd, who had been given a magic belt by a Tibetan. Duke shed his clothes for his role as Human Meteor, and did his super deeds bare-chested and bare-legged — the better to show his muscles, I guess. Duke had a boy pal, Toby, who had no powers, but who Duke took into battle with him. And Duke had no right to do so...especially when Toby took a bullet from the Nazis when they flew to France to help out a British commando. To compound Duke’s bad judgment, he even lied to Toby’s mom when he and the boy went home, telling her Toby had been injured in a car accident. Apparently lying to a boy’s mom is not a bad thing; the guys are winking at each other in the last panel.

It is probably no wonder Duke and Toby only had two more adventures in Harvey’s Champ Comics before their careers were ended. Perhaps Child Protective Services caught up to Duke O’Dowd.

The nice artwork is identified by Jim Vadeboncoeur, Jr, as Arthur Peddy. Lambiek.net tells us while working in the Iger shop Peddy is the artist who drew the first episode of Phantom Lady for Quality Comics. He had a long career in comics. I remember Peddy mainly as an inker for DC Comics in the sixties. He died in 2002. 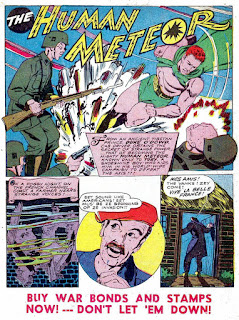 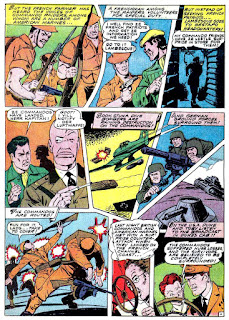 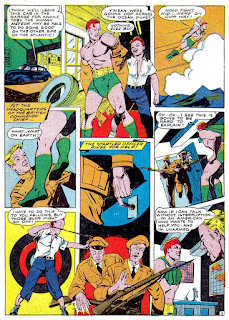 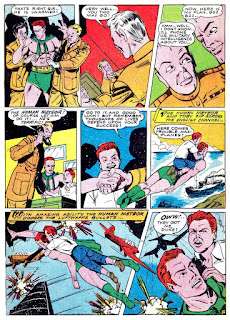 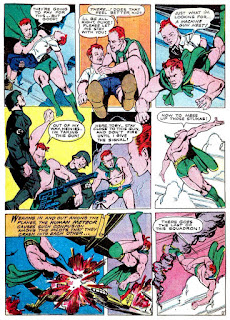 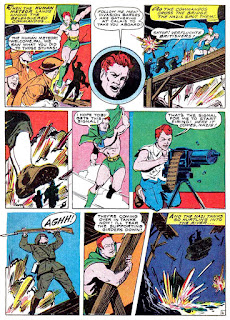 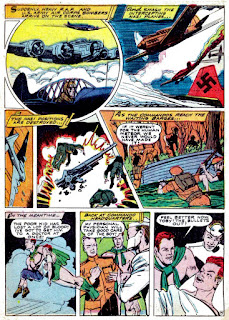 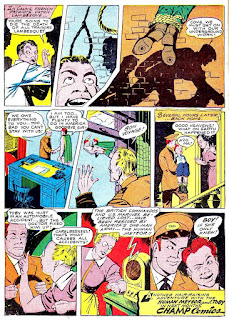 His cape is literally tied around his throat in a huge floppy knot. The only other guy I can remember doing that was Goofy in his Super Goof comic.

And yeah, Toby, sheesh. Duke doesn't get him medical aid until the battle's finished and the kid has collapsed from blood loss. I guess it's supposed to be okay because Toby said he was all right, and who's better qualified to judge their own health than an excited pre-teen?

I wonder off-and-on about the nature of superhero costumes.

I believe that Julius Schwartz thought that they were essentially circus costumes, but I think that they were modelled after science-fiction and science-fantasy garb, with Alex Raymond's Flash Gordon being the single greatest direct influence; I don't believe that Raymond was much if at all influenced by the circus, and I've never heard or read someone who consumed comic books as a child drawing the comparison; in fact, very few people in my lifetime have been particularly enthusiastic about traditional circuses.

I think that the artists preferred to draw skin-tight or minimal costumes because the artists had more experience drawing nudes, and because loose cloth is hard to draw. I think that many boys found these drawings appealing not because of some homoerotic urge, but because of a sort of narcissistic fantasizing.

That said, the relationship between the Human Meteor and Toby does look suspiciously as if it were pæderastic.

Once again, we have a child sidekick whose identifier when with the adult superhero as such is simply that used with the adult is in his or her other rôle. It seems that the writers just threw any concerns out the window. But that's not the most odd thing about Toby's relationship with the Meteor. Toby is mostly useless as an assistant. Except for the bit of firing the machine gun, which responsibility surely might have been given to a commando, Toby's job seems to be to lose a lot of blood (an especially scarce resource during the War); it's rather as if the Meteor brought his cat along. (“I've got to get him to a vet at once!”)

I think that I will creäte a superhero whose sidekick is a mouse. Not a funny-animal mouse, just … a mouse. (“Well, that's that! Say! Has anyone seen Godfrey? The little rascal seems to have leapt from my pocket again!”)

Wow, i've read about it in a Invader comics (Marvel COmics). Never thinked that i can read an original story of him

Daniel, I have my suspicions that at least some of the man/boy duos in comics were created because of their creator's interest in such relationships as sexual. But is that the case here? Toby really has no role to play other than being someone to talk to, get injured, and then put to the side until the action is over and medical care by "my personal physician" (wow, that guy went to war well prepared!) is found. Another thing is that costume you mention. I see it as being inspired by those costumes that (I assume) Lou Fine designed, which were sort of minimal, more like draping over nude forms, with trunks to cover the genitals. They could also be sexual...look at the bulge in Human Meteor's shorts on page 6 panel 5.

If the motives of Human Meteor toward Toby were challenged the artist could deny it by saying he was just innocently drawing a kid sidekick like Robin, and I would find it hard to prove just based on this story alone. It does show a totally callous regard for the kid's safety, which is bad on its own.

I think the costumes of most superheroes were just designed after Superman, and I think Siegel said Superman's costume was inspired by circus tights. The character that preceded Superman, the Phantom, looks more like a circus performer to me, and I believe at least some of the inspiration for the Superman costume might have come from the Phantom. Most superhero costumes have varying degrees of silliness. For instance, I think Batman's cape, which works designwise, would be ridiculous in real-life action.

Billy, well, Toby didn't want to appear unmanly to Human Meteor, so he probably lied. Guys do that...I have at times diminished how I felt so as not to be considered less manly. Guys have been known to die of heart attacks because they won't admit they are in pain, and I hope I won't be one of them.

Hi Pappy...I don't remember ever seeing Peddy's name before. What did he ink at DC?

The Phantom's costume does indeed look like that of a circus acrobat; however, Falk claimed (in an interview published in Comic Book Marketplace #121) that the costume were inspired by earlier depictions of Robin Hood.

In any case, Siegel and Shuster were active fans of science fiction and fantasy, and would have seen illustrations of pulp characters and Flash Gordon before the Phantom made his first appearance. Superman's cape is one of the things that argues for the priority of those SF images as an influence.

The Batman's cape is partly in imitation of Superman, but surely also an analogue for the cloak worn by the Shadow. Either would be a physical hindrance, but each is of course meant to make the wearer more intimidating.

I was inclined to agree with you, Pap, that there is no good reason for Toby to be there. But, then I got to page 6 and realized he IS a superhero--he's THE HUMAN SHIELD! Without him, Duke probably wouldn't have survived that attack!

Seriously, though, the Human Meteor deserved a very short career for continuing to carry a wounded, unpowered civilian child into battle. What an ass.

Ryan, perhaps when the Human Meteor's career was over he had time to reflect on the errors of his ways. Perhaps when he became a father and grandfather he realized what he had done. Perhaps he realized it when Toby grew up an alcoholic and pointed his finger at HM and yelled "J'accuse!" when reminding him how he ruined a young life by putting an innocent boy in harm's way.

Brad S., I recall that Peddy did inking jobs for Julius Schwartz. I don't remember if he worked for any of the other editors at DC.

Daniel, whatever the specific origin of the Superman costume, it has remained basically unchanged for almost 80 years, so they did something right.

Antonio, I haven't seen the Invaders story with Human Meteor. Could he have been the same character, or another super hero called Human Meteor? The name seems kind of generic to me.