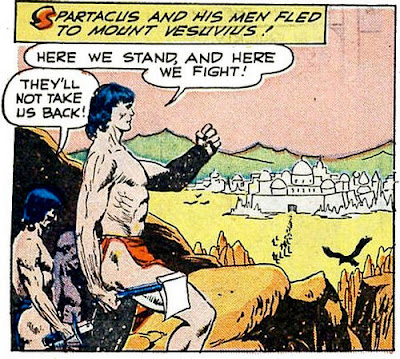 Given a choice I think a kid in the forties would rather read a regular unwholesome crime, horror or superhero comic than something — ugh — educational. But there were titles out there purporting to show factual material in comic book form: Picture Stories from the Bible/American History/Science from Maxwell Gaines at DC, then EC, It Really Happened (Pines), True Comics (Parents’ Magazine) and from Better/Nedor/Standard, Real Life Comics. I will make a guess that these comic books had another purpose than being textbooks in comic book form. It might be they could be held up to critics of comics so the publisher could say the comics biz wasn’t all just blood and thunder. Or could they? Any comic book story needed some action for visual appeal. So even the educational comics would come up with stories like “War of the Gladiators” from Real Life Comics #50 (1949).

It is also an early work by Frank Frazetta, which shows he had some rough edges when he entered the comic book industry. It is a version of the famous slave rebellion led by Spartacus. The slaves held off the Romans for a while, but lost in the end. The story glosses over that part, but the Roman punishment was severe for those who escaped slavery and were then caught. 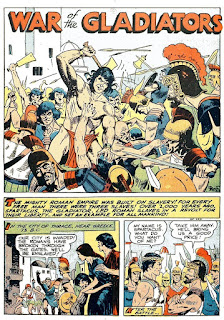 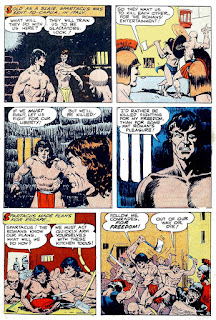 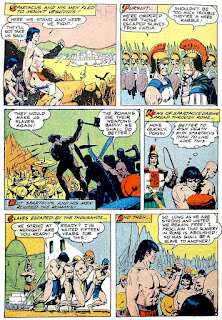 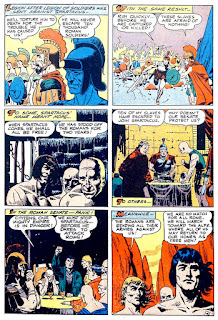 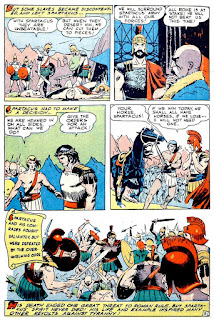 Tangental: My introduction to "classic literature" was through grade-school black-and-white funnybook/paperbacks--and man, some of those were incredible! My first exposure to the brilliant work of Alex Nino was through The Invisible Man and The Three Musketeers. (Marvel reprinted a bunch of these, colorized, as well as publishing their own giant-sized adaptations.) My older brother had quite a few Classics Illustrated Comics in his "stash;" I recall the cover of The House of Seven Gables quite vividly though I never read the thing...but I loved Under Two Flags so much (or rather, was so shocked by the ending) that I recently went hunting on eBay to score a nice copy.