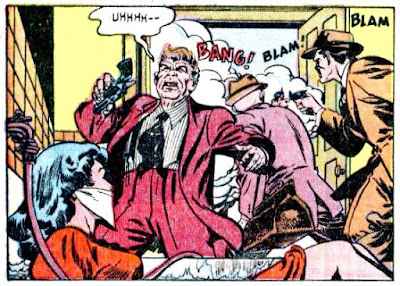 This is day three of our crime comics week.

The usually staid DC Comics got into the crime comics business in 1948 when several other publishers flooded the newsstands with gangsters and gunplay. DC did it a different way, by licensing a popular radio show, Gang Busters. Maybe the powers at DC thought that would keep away the outrage from censorious groups. But looking at the cover of Gang Busters #1 we find some of the same elements as we’d find in other crime comics, including a crook getting shot by a cop, and a pretty girl for sex appeal.

Dan Barry did the beautiful art for this tale of a policewoman working undercover for a gang burglarizing the homes of the wealthy. From Gang Busters #1 (1948): 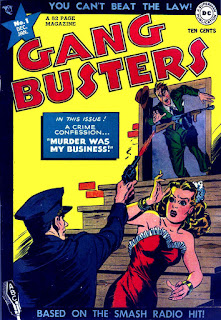 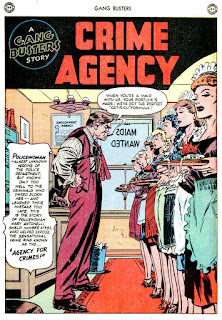 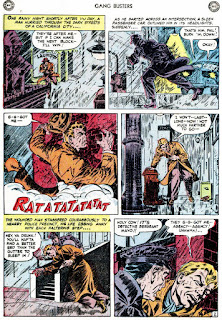 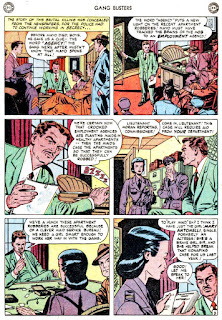 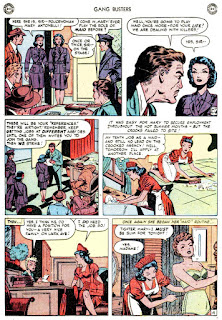 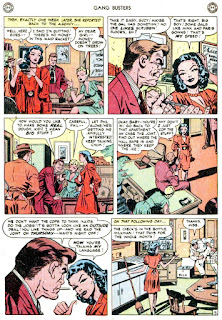 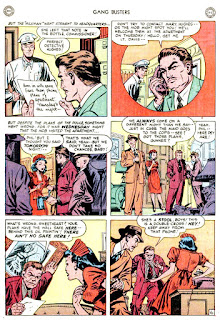 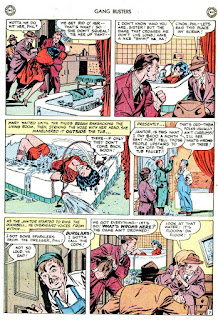 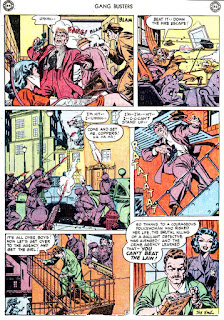 I've listened to many recordings of old radio crime drama, and have conjectured that those shows provided something of a model for the (overt) crime comics, with brutality having been very much an element of many of the radio shows.

Of course, there is a difference between the experience of story-telling that is purely audatory and that which provides images. (Hence the effect of television on support for military actions.) Parents probably thought of the comics as presenting more violent tales even in cases in which the opposite were true.

So there was an aggressive campaign to reduce the violence in comic books while it was tolerated in radio drama, and being associated with radio show probably lent an aura of greater wholesomeness to this comic book series.

I will not be the first to note that, at moments (perhaps especially in the opening splash panel) this story looks as if Simon and Kirby had been involved.

He said "Come and get me, coppers" at just the right time -- before being filled with strangely non-penetrating and bloodless bullets. Nice art on the death panel, though, and nice art through-out.

BTW, the cops don't seem to have much care for Mary; they just throw a ton of wild shots into the room she's in, she's only shielded by the body of the gangsters, and that would only be by luck.

I love how out of nowhere we get the Mary helping with the corset, now there's a B-plot I could get into!

Daniel, the differences in crime for radio (or magazines, or movies) and crime in the comics is that comics were presumed to be for children. We all know they were sold to anyone, and yet comics and children went together in the public mind.

Another difference in comics and radio would be that in radio the sponsors had a lot of say in the contents of a show. Did advertisers generally drive the contents of comic books? I haven't heard so, if they did. It seems that the most ubiquitous advertiser, Charles Atlas, placed ads in comic books aimed at males, just as ads for shoes or clothes, or weight loss aids, were aimed at comics for girls. But I don't think advertising agencies worried as much about the contents of the comics as long as they were reaching a certain group.

Brian, looking back at the corset-tightening panel I see that Madame has a bit of a bulge coming out over the top of the corset. It adds a bit of verisimilitude to the action, although the scene is, like you said, "out of nowhere." Just a little cheesecake thrown in, I guess.