Number 1992: Happy New Year: Suzie is a doozy, and an old year comes around again 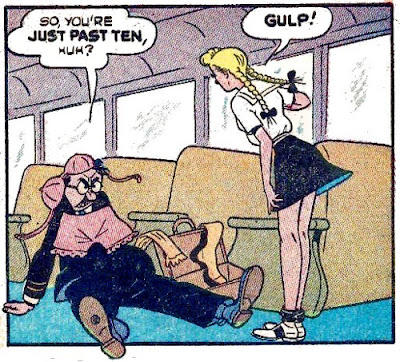 So we made it to another year, both on the calendar and for Pappy’s Golden Age.

First up for 2017 is a story from Suzie Comics #50 (1945). This story shows some changes in attitude from 1945 to now. The story, which has Suzie “disguising” herself as a “just past 10”-year-old so she can get a half-fare train ticket, becomes just past creepy to modern eyes, especially when we get to pages 8 and 9. Our faux 10-year-old ends up on an old man’s lap, then is taken to the ladies’ room by the man’s wife so she can clean Suzie “from top to bottom.” Oh, such comedy.

Drawn by Al Fagaly in his style inspired by popular newspaper cartoonist Jimmy Hatlo (They’ll Do It Every Time). 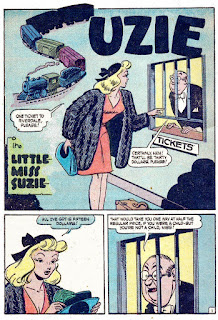 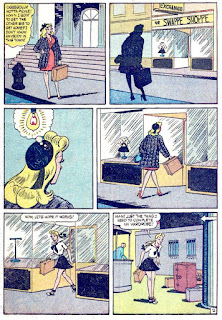 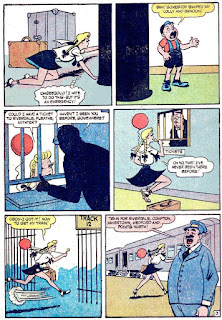 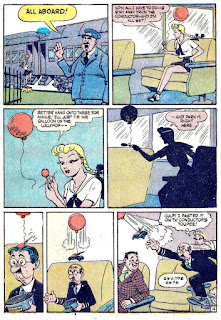 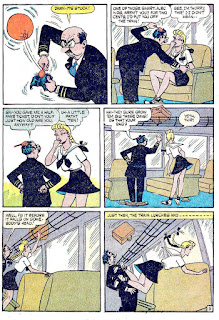 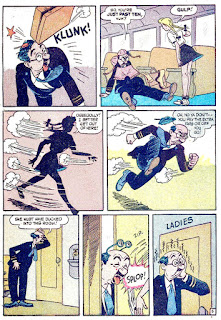 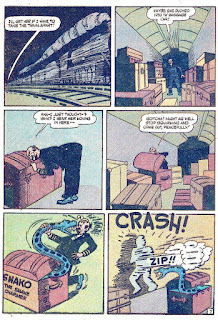 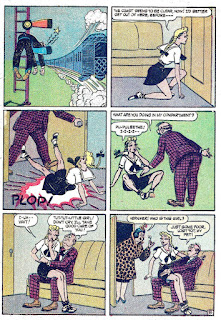 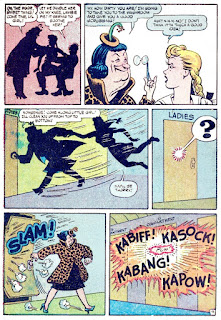 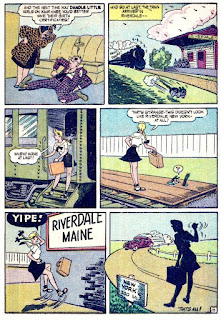 Next up for our New Year is a Katy Keene story by Bill Woggon. Woggon hit on something big with Katy: let young fashion designers send in their clothing ideas for Katy to model. It was used on other comic characters, but never with such long term success as Katy. In 1949, when the story was published in Suzie Comics #73, Katy Keene was appearing in four Archie titles, and soon got her own title.

This is also one of those fascinating calendar things, because 1950 dates are lined up the same as 2017. So print out the last page of the story and you will have yourself a 2017 Katy Keene calendar. Another perk from Pappy! 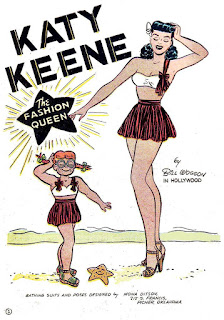 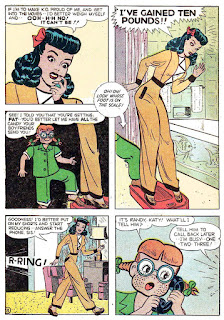 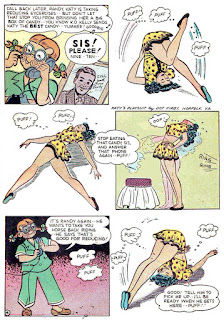 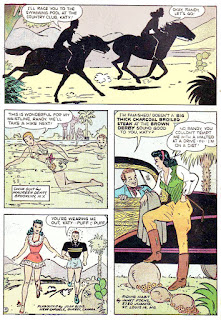 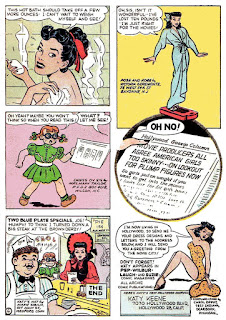 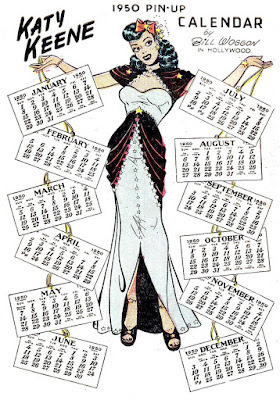 Riverdale? Is Suzie going to see Archie and the gang?

I wonder if Suzie gets picked up by child services before she makes it home. But, really, she makes the worst 10-year-old ever--she's so tall and obviously has breasts! Are you sure that dirty old husband didn't know her secret when he put her on his lap?

Hey, the Katy Keene story is metatextual--she knows she has readers! But, does it truly make sense that she'd be so famous in the comics and yet have to struggle to get into the movies? And what kind of struggling actress has so many freakin' outfits?

Thanks for the cool calendar!

Ryan, I looked online and found over 20 cities in the United States (and some in Canada)named Riverdale. There's even a Riverdale in the state where I live. But I guess Suzie could have been visiting the Archie gang.

As for Katy having so many outfits, maybe she has a rich sugar daddy we don't know about, or maybe she shoplifts.

Whether the old man knew she was posing as a 10-year-old I won't speculate, but I'm sure his missus knew it at a glance.

Suzie is sexier than Ginger Rogers, who pulled the same scam in the 1942 movie, "The Major and the Minor."

Perhaps Suzie was inspired by that movie where Ginger Rogers had to pose as a kid for some reason.

Al Fagaly's artistic similarity with Jimmy Hatlo probably led to his doing a "They'll Do It Every Time" ripoff (with Archie colleague Harry Shorten), "There Oughta Be a Law" (which somehow lasted into the mid-1980s, drawn by Mort Gerberg).

Thanks 4 the calander Pappy! 1955 Dean and Jerry "Ur Never 2 Young" has that same Suzie plot with Jerry as Suzie!

They always say fetishes start when somebody -- usually young -- reads or sees something during some sort of trigger event and that cements in the fetish for life.

I think this story probably locked in a lot of guys in the 50s -- the fetish is, of course, getting beat to a pulp by a cliche battle-ax wife :)

That Katy story, wow, it had a narrative -- the old "most do something, twist, the opposite is true" but it was so distracting with the attempts to work in new wardrobes that the whole thing fell apart.

Alicia, rnigma and Gary...thanks for pointing out those movies. As I write this, The Major and the Minor is scheduled on TCM...I won't get a chance to watch it, but I believe it was probably the basis for the Suzie story. You're Never Too Young seems like it would be tailor made for Lewis, who even in his "adult" screen persona acted like a nine-year-old with ADHD.

Yeah, that was the movie, "The Major and the Minor" (though I recall a movie that had a similar title, with Charlton Heston and some kid in a military school)... and yes, Martin and Lewis remade it as "You're Never Too Young."

Riverdale High School is a private school in Portland, OR.