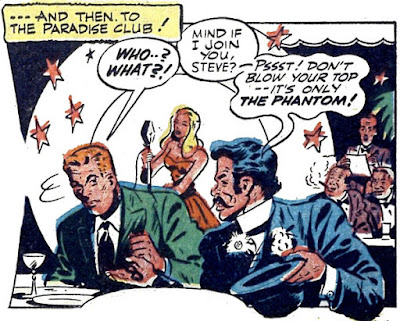 Considering how long the Phantom Detective appeared in pulp magazines (20 years, 1933-1953), and Ned Pines, the publisher of the Thrilling pulps, had a line of comic books (Nedor/Better/Standard), you would think the Phantom would have had a career in comics as well. But, no. He was featured as a backup feature in Thrilling Comics for 17 episodes, and a one-shot appearance in America’s Best Comics. I haven’t read an explanation as to why he wasn’t a crossover star. Maybe his pulp appeal didn’t work in comic books. The Phantom Detective went about mostly disguised as someone else, unless you count the images of him wearing a domino mask. That probably wouldn’t qualify as a disguise. The Phantom was yet another rich guy using deductive skills to fight crime, a la Sherlock Holmes. 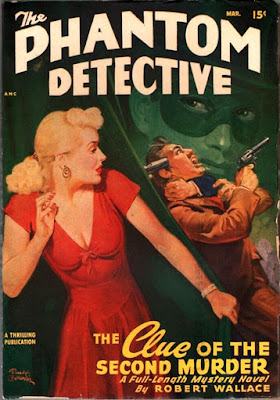 The Grand Comics Database doesn’t guess at a writer, but the artist is Edmond Good, an American born artist who moved to Canada at age 10, then back to America in 1943. He had a career bouncing around various publishers, then went into other art endeavors, including including art director at Tupperware. Good died in 1991 at age 81. There is an interesting 2013 article on Good at the Comic Book Daily site, including a scan of original art Good did for a 1942 Canadian issue of Weird Tales, and other examples of his art. 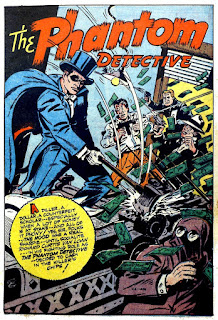 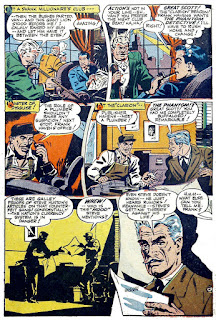 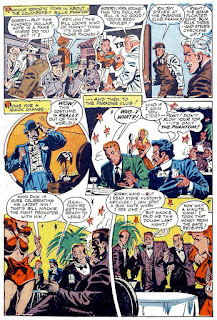 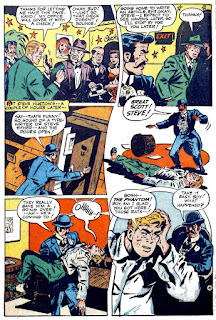 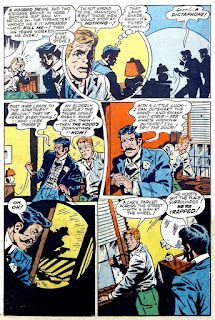 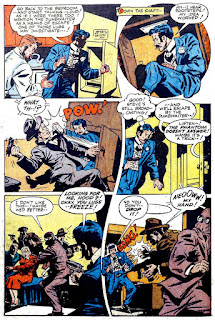 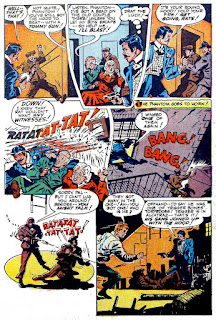 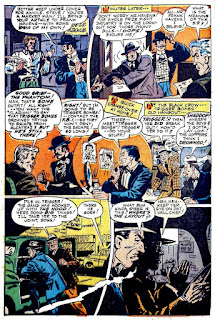 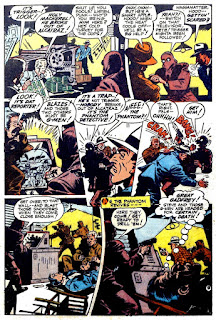 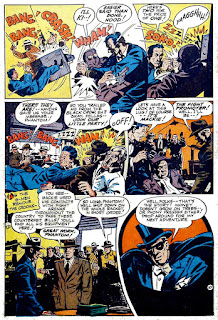 Edmond Good was the first artist on the long-running Tomahawk feature for DC. Here is the first story, from Star-Spangled Comics #69 (1947): 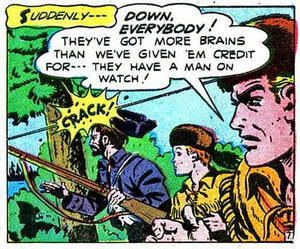 Like most pulp heroes, The Phantom Detective wasn't visually-jazzy enough for comic books!
(Tarzan isn't a costumed hero, per se. In fact, his lack of a costume probably contributed to his sucess in other media!)
Look at the lack of success Doc Savage, The Avenger, and others have experienced over the years (until very recently)!
Some, like Captain Future (in anime), experienced moderate success, and that was downplaying his pulp roots, while pushing story elements similar to Star Wars.
Only The Shadow (who was actually a creation for radio) has managed to transcend his print roots in pulp to success in comics!

(And I am moved to outrage when the animefication of Captain Future is brought to mind!)

Daniel, going to my Shadow Scrapbook (1979) and Duende History of the Shadow (1980), I read that the Shadow character was an announcer on the radio for Street and Smith's Detective Story magazine. He would read a short story from the issue on sale the next day. According to Shadow Scrapbook, people were going to newsstands asking for "the Shadow." When word got to the powers-that-be at Street and Smith, the plan was launched for a Shadow pulp magazine. I believe that is what Britt Reid means when he says the Shadow was "a creation for radio."

Next to the anime version of Captain Future (which I saw on VHS over 30 years ago and have not bothered with since), the Archie Comics version of the Shadow was even more appalling. Egad, who green-lit that travesty? Whatever, when I saw those on the comic book spinner I quickly passed them by, and looking at the covers I have linked to only reinforces my original revulsion.

Britt, I don't own any original Shadow pulps, but at one time I (sob!) had several incredible issues of the Street and Smith comic book with art by Bob Powell and his assistants. It has been years since I read the DC Shadow comic book series, but my impression is the original comic book version went with the "clouding men's minds" gag found on the radio, and the DC version was more of the character who blends into the darkness.

We haven't mentioned your "alter-ego," the Green Hornet, who had a long run in the comics in the forties. I enjoyed the Green Hornet on television, but I think it failed because of that stupid fad for camp. He wasn't silly enough, I guess.

The Archie Comics version of The Shadow came about because Belmont Books (which was owned by the same people who owned Archie Comics had comissioned a series of new Shadow stories.
(The success of the Doc Savage paperback reprints from Bantam prompted a number of pulp hero-related projects,plus Shadow radio show reruns were doing great ratings on college radio stations!)
So the company extended the license to include new comics as well!
The Shadow paperbacks were updated to the swinging '60s with The Shadow fighting C.Y.P.H.E.R., s network of baddies with his ability to clout mens' minds.
Thankfully, it never went the full costumed superhero route!
But it came close!
The final novel, The Shadow "Destination: Moon" has to be read to be belived!
The comic followed the paperbacks' version for two issues, then gave Lamont a hideous purple and green costume and Batman-like "Shadow-weapons" for the remainder of the run!
There's a gallery of the paperback covers here... http://atocom.blogspot.com/2013/09/pow-thwok-biff-holy-heroes-its-shadow.html
BTW, Belmont also did a paperback reprint of the Archie superhero (Fly, Shield, Web, etc) comics in 1966-67!

I'd quite forgot about the narrator called “the Shadow”, though I see that as a matter of brand, rather than of character. Of course, that distinction is pretty weak when it comes to the Shadow!

As I understand things, it was from the initially rival Shadow that the invisibility gimmick came.

As to the Shadow as presented by Archie looks, the bottom line is that a lot of people involved in generating comic books and adaptations of pulp and comic-book characters didn't and don't respect the source material nor us. In their eyes, he'd have been just one more costumed escapist fantasy.

Britt, I don't remember the Belmont reprints of the Archie superheroes, but I did buy the Belmont Shadow novels, including Destination: Moon. It has been years — nay, DECADES — since I read them.

There are always surprises for me in reading the history of publishing companies. I had no idea Belmont was an imprint from the Archie people...I remembered that only the first novel was written by Walter B. Gibson, and checking online I see the balance were written by Dennis Lynds.

Thanks for the update.

When The Shadow started in July 1930, he was an announcer/narrator for the S&S's pulp magazine Detective Story Magazine as mentioned.

Within the year, because of his popularity, Walter Gibson was hired to write the pulp novels which launched on April 1931.

Then the radio show was launched in September 1937, with Gibson as at least a consultant in the beginning. The reason for the invisibility on radio was time. In 30 minutes it was faster to be invisible than describing him hiding in the shadows. Also, in the stories he rarely spoke. On radio, he needed to speak, which i suppose would have given his position away.