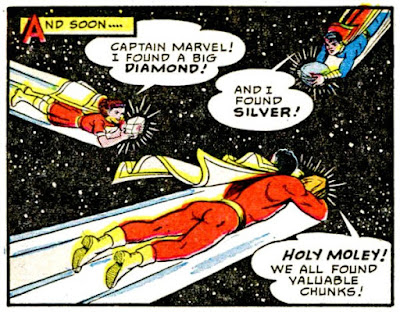 We now know what we did not in 1950, that teenagers have brains that are still developing, still growing.* Sometimes teens do dumb things, even though their larger bodies may fool us into thinking they should be smarter than they are. (I am not disparaging you, teenage readers...as a teen my brain was once undeveloped, and now with age is becoming undeveloped again.) Anyway, developing brains explains why the Marvel Family should be duped by a scientist, leading to Captain Marvel (a youth in a man’s body) hitting Dr. Dunkel first, then demanding an explanation for his actions. Teens can be impetuous.

“The Menace of the Rings Around Earth” is the kind of screwball plot Fawcett got away with for several years in stories with Captain Marvel and his family, Mary Marvel and Captain Marvel, Jr. The best thing about it for me is the artwork of Kurt Schaffenberger. 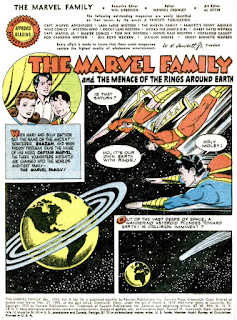 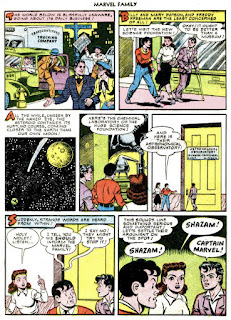 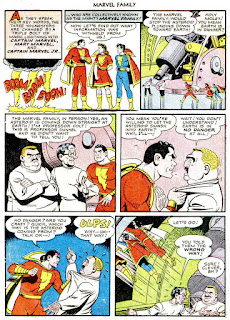 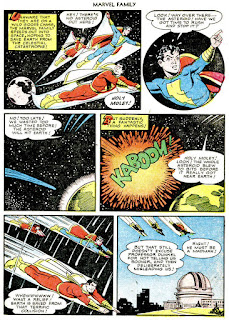 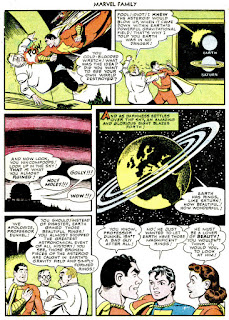 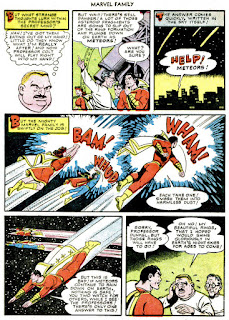 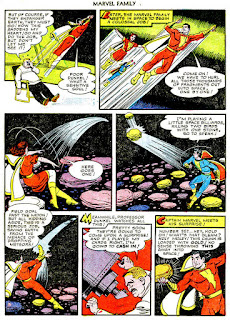 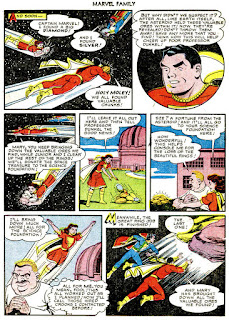 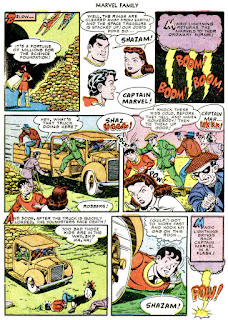 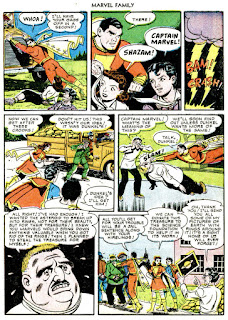 *See this article from NPR.

A Marvel Family story where the silliness is deliberate. Just click on the thumbnail. 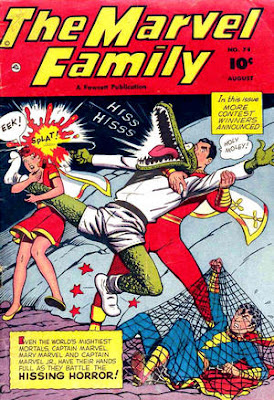 I am reminded of Alexander Abian, who in the early '90s became briefly famous for arguing that we ought somehow to blow-up the Moon. That wretched idea was crack-pot in any case, but he seems to have set-aside the subsequent meteor bombardment as a detail to be worked-out later.

But thoughts of mining extraterrestrial bodies are not so crack-pot. I very much doubt that the benefits would exceed the costs in the case of use on Earth, but for extraterrestrial construction, it would often make sense to use what were at-hand.

Yeah, the Big Red Cheese was pretty quick to throw that first punch. Actually, lots of superheroes have been, regardless of the fictional ages of their brains. But the authors almost invariably write the story so that whoever took the punch would have been known to deserve it had more information been available. The underlying relationship between ethics and epistemology is just ignored; I doubt that the writers worry as much as they should about that relationship in other contexts.

I'm not sure that Billy, Mary, and Freddie are meant to be seen as teenagers; their ages seem left vague, but are surely meant to be taken as those typical of the presumed readership, and I'd figure them as preteens. Also, while I'm sure that Mary Bromfield is Mary Marvel and that Freddie Freeman is Junior, Billy and Captain Marvel seem to be different persons who swap location. Captain Marvel has the Wisdom of Solomon, but apparently Solomon was an irritable and impetuous fool, whose baby-cutting proposal was perfectly sincere.

In any case, gotta hope that the transformation to Marvels somehow healed all the damage to those young brains from getting hit by thugs.

Schaffenberger's art maintains much of its distinctive look, but has also been made to conform to the style established by Beck. I'd rather see Schaffenberger drawing Ibis … well, okay, I'd rather see him drawing Taia, as he could then work in a more realistic style.

Daniel, hitting first and asking questions second is reminiscent of that vigilante-style of law 'n' order in America. Captain Marvel, without any real evidence may somehow intuit that the scientist was up to no good, but to me it is problematic. I'll bet if polled at the time the readers would have found nothing wrong with beating a guy up out of suspicion and then finding out whether he had done something to deserve it.

I first saw Schaffenberger's work in the old Lois Lane comics. I realized he was somehow different in his style and approach than the regular Superman artists. I don't believe he changed his style substantially when drawing the original Captain Marvel, except for drawing it in the house style. When he drew Superman in those old issues of Lois his Superman was, to me, substantially different than what was presented in all of the other comics in that group.