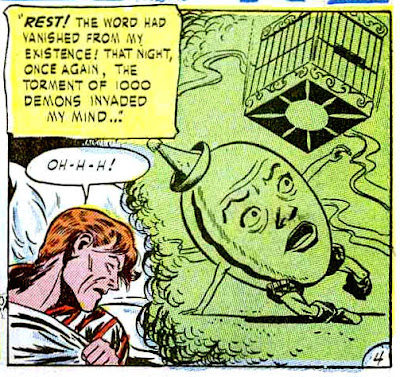 In the past when I have shown stories from early DC mystery comics (I hesitate to call them horror) I have gotten a note or two about the faux supernatural elements. It’s true that most of what seems out-of-this-world in the stories turns out to be fake, and unlike horror comics of the era, there are no real vampires, werewolves or ghosts. In the case of this story from House of Mystery #6 (1952), there is an apparent curse on a sculptor...or is it? DC even ran a house ad touting this type of story (“We all know there’s no such thing as the supernatural...”) from the same issue: 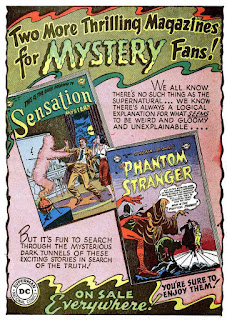 In “The Monster in Clay” though, there is a bit of a wobble at the very end. So the main supernatural element may not have been what it seemed, but what about the ending? I’ll just leave it at that.

Bob Brown, longtime journeyman artist at DC Comics, did the artwork, both cover and story. No credits for the writing. 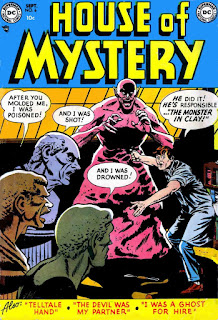 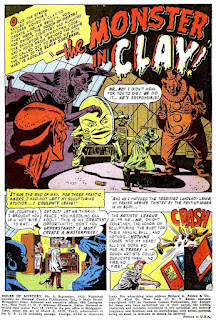 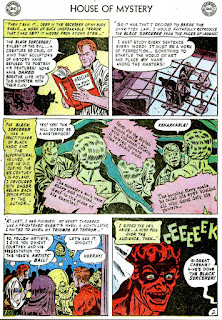 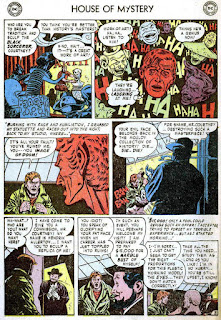 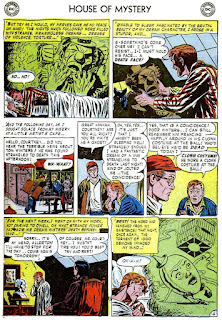 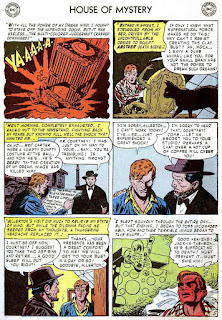 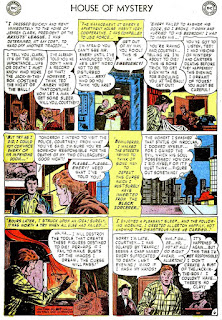 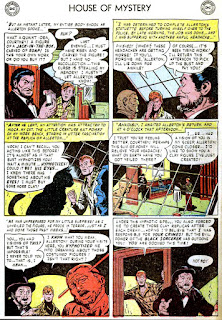 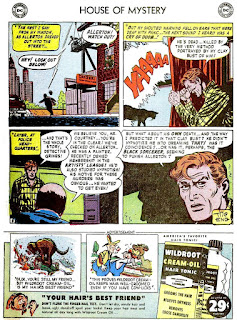 Four vintage stories from House of Mystery by Curt Swan I showed in 2010. Just click on the thumbnail. 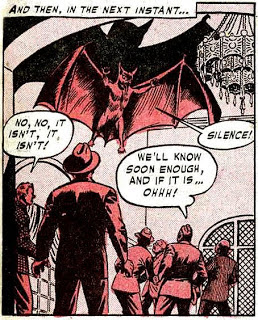 Of course, while the DC brand wasn't used for horror stories in the late golden age, Donenfeld was involved with ACG and probably behind at least one other publisher of such content.

Nor had DC always steered away from tales of supernatural horror. In the early golden age, the cosmos of the Spectre was a nightmarishly bleak place, and that of Doctor Fate borrowed noticeably from that of Lovecraft. Of course, before their disappearances in the middle '40s, the Spectre wasn't even a dead guy anymore (somehow, he became distinct from Corrigan! who went away to war!), and Doctor Fate seemed to be reduced to a superhero with not much more than the power of flight.

At least one of us should note that the opening narrative of “The Monster in Clay” makes the common confusion of “flaunt” for “flout”. (You have at least one reader who is impressively able in English, given that it is not his first language; we cannot allow his corruption!) The distinction ought to be easy to remember, as “flout” is closely related to “flute”; the metaphor was one of whistling at something serious.

Artists' guilds in the early '50s were surely ruled by convention, but the convention was not respect for what was recognized as tradition; artists prided themselves on, uhm, flouting convention when they recognize convention as such. (Some recognized the conventions that were actually holding sway, and prided themselves on flouting those.) Had there been a character or figure such as the Black Sorcerer, the real risk in presenting a bust depicting him would have been to be mocked as banal, as every second sculptor would already have banged one out. They'd be kitsch collectibles on eBay now.

(Of course, Warhol later elevated banality itself, and art has become po[st]-mo[dern].)

Perhaps Hendrik Allerton involved Courtney exactly to get suspicion to fall upon him, but there would surely have been less rococo ways of doing this. (And, with Allerton's powers of hypnosis, he might first have got himself into the League before extracting revenge.)

I don't really know what to say about DC's mystery/suspense comics of the period. I read a large number of them and while some of them have fabulous art and are moody at times, most of them just lay there. The stories never moved me, all the way up even until the 70s versions (like Witching Hour.) It's almost as if most of these were written by committee without a real idea of what they were doing at times.

I get the feeling that the vast bulk of this output -- like the tremendous number of purple gorilla covers -- was edited and pushed and pulled by a lot of hands to try to make it as popular -- and safe -- as possible.

Say what you will about the wild west of horror comic publishers in the 50s -- but they had that fly-by-the-seat-of-your-pants craziness that DC never seemed to get.

Brian, I just knew when I showed this story I would hear from you!

I agree that DC played it safe, at least up until the Comics Code lightened up in the '70s, and many of the original publishers and editors were gone or on their way out.

And nothing wrong with gorillas...I bought a lot of DCs with gorillas on the covers. I guess I was one of those guys who, for whatever reason, they fascinated.

Daniel, yes, we would not want to lead any of our English-as-a-second-language readers astray.

I missed it, by the way, so thanks for pointing it out.

(I have always understood the meaning of "flaunt" from The Producers with the late great Zero Mostel, who as Max Bialystock hollers out the window at a richly dressed woman getting out of an expensive car, "That's right, baby! If you got it, FLAUNT IT!"