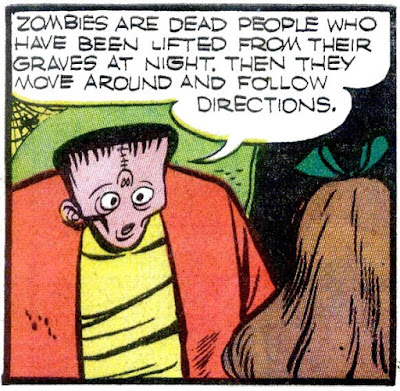 Biographical information on comic artist Dick Briefer tells us that he did a comic strip for The Daily Worker, a Communist Party newspaper. Briefer was a prolific artist who also wrote, and I think I see an occasional comment in his stories on the state of workers in America, including today’s offering, “Frankenstein and the Zombies.” The boss of the “zombies” is a whip-carrying Simon Legree-type. It would not have been a good idea for Briefer to be too obvious, especially when this story from Frankenstein #8 (1947) was published. At that time Congressional committees were looking for communists in the entertainment industry. I assume that would include comic books, already under a lot of criticism.

I might be looking too close, even though the boss does look like how capitalist bosses were depicted. Regardless, it is a funny story 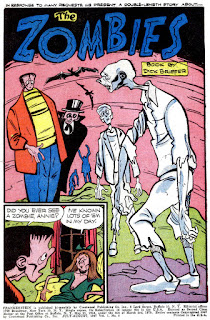 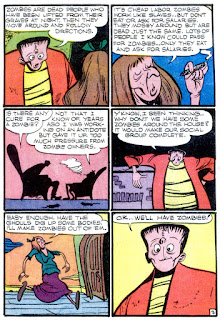 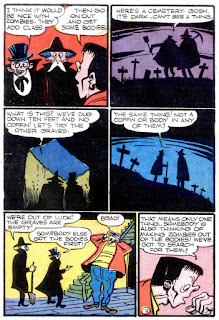 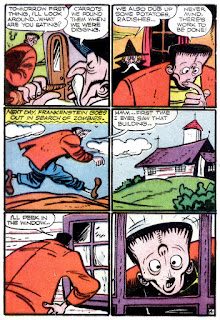 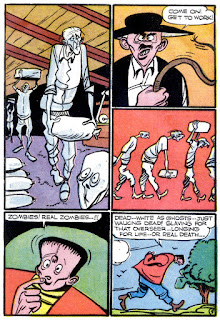 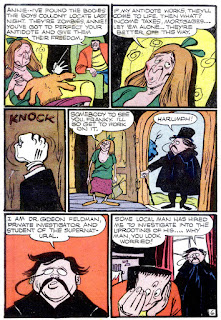 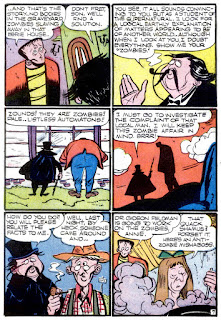 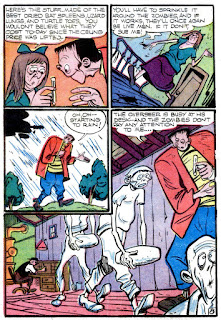 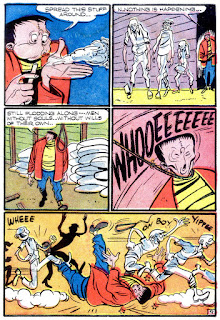 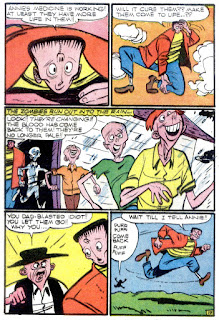 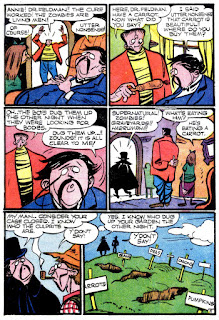 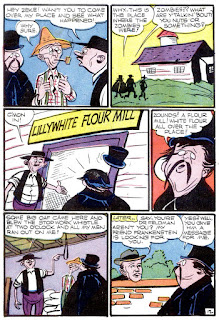 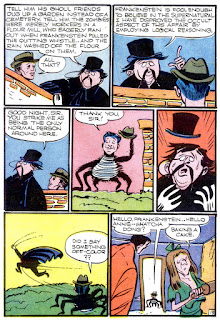 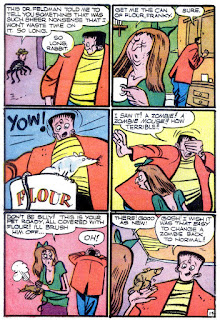 Certainly, in this story Briefer was presenting the working conditions of the proletariat as being analogous to a zombie-like state (as zombies were then typically imagined). It's hard to say to what extent the joke was meant to reveal the truth; through-out the history of communism, people have parted ideological ways with it; but, most often, they hold onto their antipathy to whatever they originally labelled “capitalism”.

When the idea of the zombie was introduced to America, it was not that of a person truly dead, but of a person made to seem dead and reduced to a state in which he or she was easily compelled to obey simple commands. We see that notion in White Zombie (1932) and again in Revolt of the Zombies (1936), but the idea of an animated corpse displaced the earlier idea. Perhaps as a carry-over from the earlier notion, the animated corpses were typically slow-moving for many decades; that is seen into the stories of Carpenter's Living Dead franchise. But video-game designers began presenting zombies as rapidly-moving, and the idea of the zombie was merged with that of people made rabid by some sort of contaminant, and they are now usually thus in popular entertainment more widely.

Indeed, zombies began to seem increasingly like those of the indigent who were most damaged by homelessness and by substance abuse, and zombies have largely become a troubling metaphor for those people. However, in the case of what is called “the Zombie Apocalypse”, zombies are a metaphor for people reduced to poverty and disregard for humanity in the event of an economic collapse.

Pre-code horror comics tended to play faster and looser with the notion of zombies. One that I saw years ago had most or all of its zombies passing for ordinary humans, but involved in a vast conspiracy to seize state power and impose a order of regimentation, complete with militaristic parades. Essentially the zombies were a metaphor for what was then the American popular notion of Communists. (A notion so far removed from that which Briefer once had that neither would be recognized in the other.)

Daniel, George Romero, who introduced the intestine-munching dead in Night of the Living Dead in 1968, said he was influenced by EC Comics and Richard Matheson's I Am Legend, a novel about vampires.

Romero's creations are called zombies, but he corrected that notion to say that they were ghouls who eat flesh.

For myself, I am weary of the repetitive nature of the "zombie apocalypse" and feel it is time for the movies and television shows to chomp their way out of pop culture.

As for the classic definition of zombie, the one you present, I had many a day in that somnambulistic state at work, where I was more zombie than living person.

Ugh! I am embarrassed to have confused Romero with Carpenter, but thank you for setting that straight!