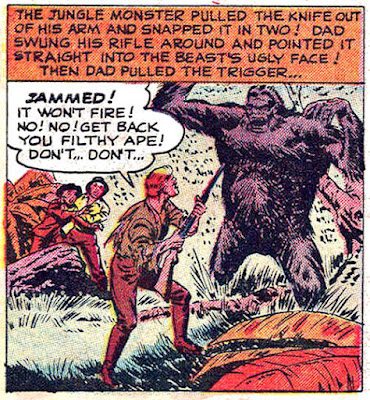 I chose this story from Atlas’ Men’s Adventures #4 (1950) because of the giant gorilla on the cover. (Such is how I choose stories...does it have a big ape or gorilla? Okay, it’s on the schedule!) But when I got into it, besides being attacked by a big gorilla, the Lippincott family, out hunting for lions and any other endangered species they can assassinate, have issues bigger than that killer gorilla. The dad is verbally abusive to his son. He sees him as a coward because he’s not out shooting animals. But when young Ronald Lippincott agrees to go along with his dad on the annual safari, the dad doesn’t bother to teach Ronald how to shoot! (Hey, Pop, you weren’t a Boy Scout? Remember their motto, “be prepared.”) Ronald should have pushed the issue before they left for Africa.

For a comic selling itself as red-blooded male adventuring, there is an awful lot of feeling exhibited here. Ronald wants to be a doctor, but his dad wants him to be a two-fisted tycoon like him. What is a boy to do? The thought crossed my mind, when on safari shoot the old man in the back, claim hunting accident and take over empire, but that would just be wrong...so wrong. That would make it a crime comic.*

The Grand Comics Database says it is drawn by Bob Brown, with no idea who wrote the overloaded captions and speech balloons. 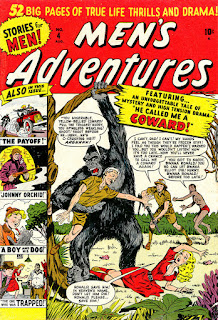 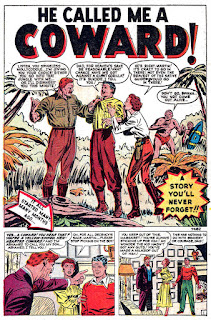 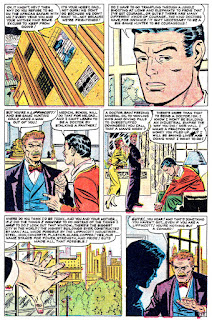 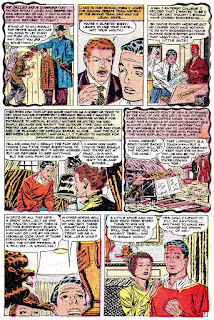 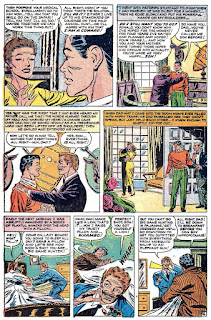 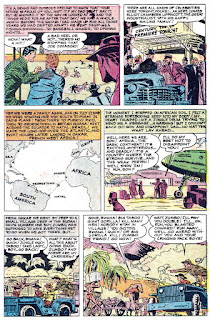 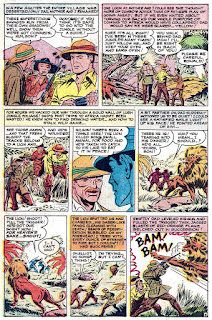 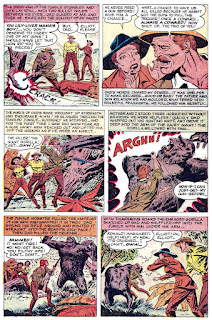 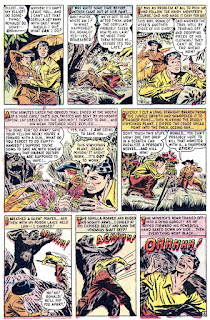 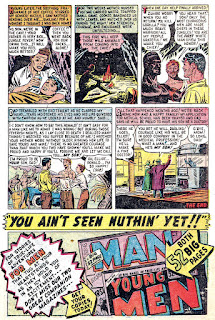 *I have a crime story from this issue scheduled for later this month.
Posted by Pappy at 12:01 AM

So wordy! Why did they even bother having artwork at all?

Brad S., let me make a guess. It could be because comic books were attacked by educators and newspaper columnists as sub-literate. The wordiness might be an attempt to give it more "literacy." It probably didn't work, because many comic book readers were reading enough to get the gist of it and then letting the pictures guide them.

I'm sure it wasn't because the scripter was getting paid by the word...they got a page rate, so half the words would earn the same for the writer as being verbose and leaving hardly any room for pictures.

When she was pursuing a master's degree in education, my mother tested a theory that comic books could be used to teach remedial reading. She used a wide variety of comic books, but established that they required too much reading proficiency to be suitable.

I'm sure that she was somewhat embarrassed about that result, as she had been dismissive of comic books, and as she didn't tell me the outcome for many years.

As was being done at EC the wordiness changed the simple pictures into "literatutre".
It allowed the material to be sccepted by children and adults as well.
This was indeed a Golden age of the potential of the medium. By reading the text one recieved the richness and nuance of the story. For the young they reveled in the pictoral element. Comic book artisst were illustrators in the truest aense of the wotd. Grsat example of the combination of words and pictures. Many of these were written by Stan Lee, although this one is hard to tell.

Daniel, I got my start in reading with Dick and Jane books (first grade, 1953), but my reading really took off when presented with a box full of comic books by my cousin. Dick and Jane was tepid, uninteresting, but Donald Duck and Uncle Scrooge were vibrant and interesting. Visits to the library got me interested in non-comics reading, but the highlight of my week was when my mom would take me to a large drugstore and I could pick out some comics, with her approval, of course...she worried that Casper the Friendly Ghost might scare me. (Hey, Ma! I'm made of tougher stuff than that!)

In the early '70s my wife worked for the media center of a large school district. They got a big package full of Archie Comics donated by the publisher as part of a program to encourage childhood reading. (And to get kids interested in Archie comics, no doubt.) There was so much prejudice against comics that after a couple of months and no takers my wife just gave the ocmic books to me. When I saw them they were just standard Archie comics, not designed for beginning readers. The reason the teachers rejected them, as some told my wife, was because of the stigma. Comics did not equal literacy. The prejudice was probably left over from the fifties and the anti-comics crusade.

Gordon, thanks for writing. I don't know who wrote the story. Maybe the knowledgable Doc V of the superb Timely/Atlas Comics site would know.

It's hard for me to read comics with lots of cramped balloons and captions. My old eyeballs weren't what they used to be when I was young and could more easily read densely written comic book stories.

Hi Pappy (and Gordon),
No such luck. See https://www.atlastales.com/issue/2359 They don't list a single writer credit.