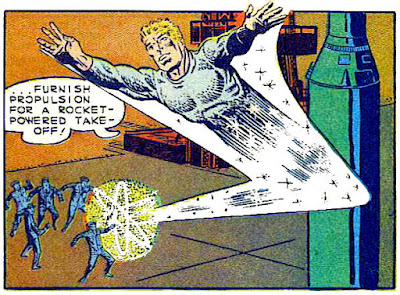 In his blog, Toonopedia.com, the late Don Markstein asserted that Captain Atom was Steve Ditko’s first superhero, so Space Adventures #33 (1960) has some historical significance. I didn’t know that when I picked it from the comic book spinner at my local drug store in ’60. The historic significance might not have been evident to a friend of mine either a few years later. He was very enamored of Ditko’s Spider-Man, and was looking for other Ditko work. I am sure he is the one who got my copy of this comic, so the scans I am using for this presentation are those I found on the Internet. All I can say about that is, “Hey, Jimmy! I want my comic back!”

Also not likely is Captain Atom’s origin, which is just as silly as all of the other superhero origins, but involves nuclear bombs and radiation. In one panel Captain Atom explains he gets out of his civilian clothes and down to his Captain Atom uniform by burning off his top clothes with radiation. A nice touch is showing then-President Eisenhower as a character. Also unlikely would be putting a radioactive man in the same room as the President of the United States, and that falls on the scripter, Joe Gill.

Ditko left the strip, did Spider-Man for Marvel, then went back to Charlton where he revived the character. But despite Ditko’s involvement, Captain Atom was short-lived, and this version of the character was gone by 1967. 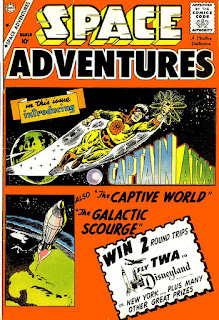 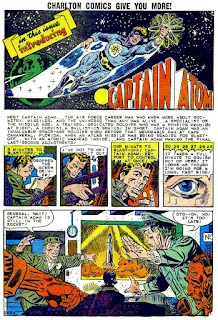 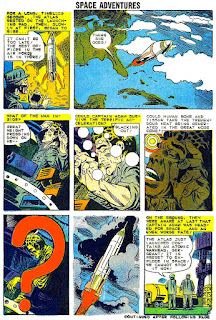 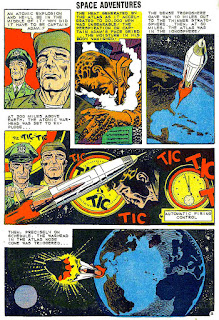 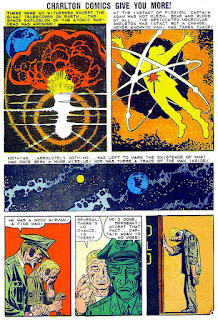 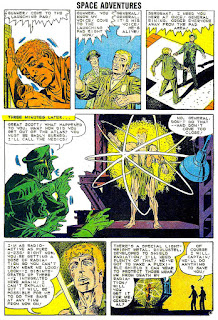 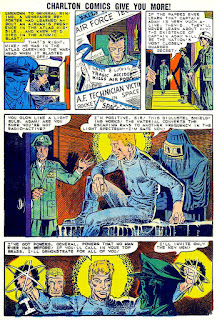 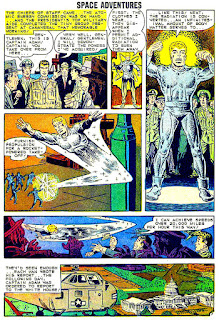 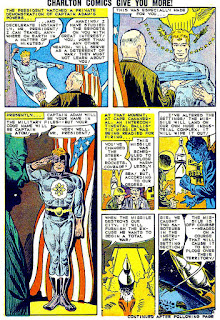 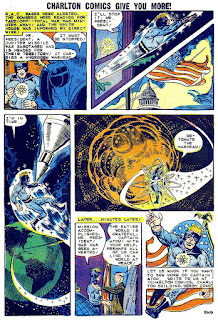 Come back on Sunday, September 11, for the first issue of Charlton’s Captain Atom.
Posted by Pappy at 12:01 AM

Quoting a November 10, 1959 letter from Ditko to me: "Charlton Press is taking a mild plunge into the super-duper line. I'm doing Captain Atom for them. Boy, I never heard or saw anyone so super-human in my life. He's going to be very hard to swallow."

Pappy, sorry that I don't have that origin issue to send you...I only have a few different issues from the 1966-67 period.

"Captain Adam, your codename is Captain Atom." Yeah, some things only work when you read them in a comic book.

Compared with the terrific build-up to the explosion in the early pages, which I thought was masterfully handled by writer and artist, the last page, which should have been a worthy climax, was over too fast. Guess they ran out of room, eh? Other than that, it was a fun story.

On page 2, when the big question mark appears over Adam, I heard in my head, "That...is THE QUESTION!" Y'know, a nod to another Ditko creation. And when he reappeared all atomicky (my word), I couldn't help thinking of Doctor Manhattan, the Watchmen character based on Captain Atom.

Anyway, thanks for a neat tale, Pap! Happy Labor Day!

Uhm, yeaahhh…. Nuclear explosions and radiation are like that. That's why Hiroshima, Nagasaki, and the areas downwind from US test explosions, from Chernobyl, and from the Fukushima reactor were or have been so over-run with superpowered heroes and villains.

I wonder about classifying Captain Atom as Ditko's first superhero. To the best of my knowledge, Captain Atom was the first character drawn by Ditko meant to be taken as a superhero; but Ditko illustrated a lot of the fantasies cranked-out by Atlas/Marvel before they made a conscious choice to return to presenting superheroes, and some of the characters, though they appeared perhaps just once, are a great deal like Doctor Strange or like the early Hulk. Some of his earlier stuff at Charlton might similarly be considered.

I really liked his original baby-blue costume! I even liked it when they changed it to gold (Possibly so it stood out better on covers!)
BUT....when they changed it to the "new" era red-white and blue it just was too generic. Ditko at his 60's prime here! It looked like he really enjoyed doing this, just like his early Spider-man stories did !

I picked this up second-hand when it was reprinted in Strange Suspense Stories, just before Ditko returned to revive the series. The art is so lush compared to Ditko's later work at Marvel and may have been, along with Ditko's Konga, the reason I ended up paying any attention at all to Charlton Comics. Just beautiful.

Mike, fascinating insight...from Ditko to you. I can't get much more authoritative than that! Thanks for sharing.

Russ, I loved those early issues of Gorgo and Konga, and was disappointed when other artists would draw those features. There was just no one like Ditko, and I learned to spot his art early on (it helped that he signed his work, too).

Daniel, if you check out Mike Britt's note at the top of this column I think that shows that Ditko was drawing a more traditional superhero than those that you mentioned.

Superheroes, supernatural or mysterious stranger-types, I liked all of them at the time.

Gordon, you may have answered my (admittedly unasked) question as to why they changed colors of Captain Atom's costume. So it would stand out.

I remember hearing someone tell me Roy Thomas told him there had never been a successful superhero who didn't have a costume in a combination of red, white and blue. I don't know if it is true or not. I really don't pay that much attention to color schemes in comics, which I thought were almost universally bad.

Ryan, I guess I knew that Dr Manhattan was based on Captain Atom, but didn't think of it when writing my comments. Alan Moore put quite a different spin on those Charlton-inspired characters and made them his own.

I remember having the reprint of this origin story from "Strange Suspense Stories" #75, when his superhero uniform was colored yellow and orange.