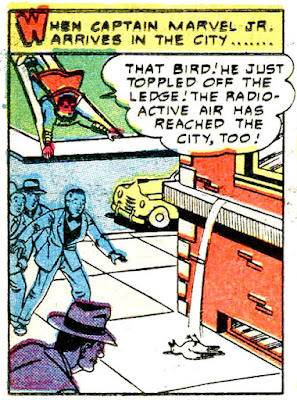 I didn’t misspell “poor” in the header above. Spencer Poore is a businessman in “Captain Marvel Jr and the Radioactive Air!” from Marvel Family #54 (1951). What we comic book readers learned early on — and this is a spoiler if you haven’t learned it yet — is any new character introduced into a story will likely be the bad guy at the end.

This entertaining bit of hokum involves a real-life threat of the time, radioactivity. The Atomic Age was upon us!

I have thought about what friend and frequent commenter Daniel said about the Marvels...they should just stay in their superhero personas. I can see why Billy and Mary Batson go back to their civilian identities (in Billy’s case, he has a job at station WHIZ), but poor Freddy Freeman is left to peddle his papers while supported by a crutch. I know this is a comic book and uses comic book logic, but of the three Marvel Family characters, Freddy is the one who could bypass his handicap by staying a superhero.

Grand Comics Database doesn’t name a scripter, but guesses Kurt Schaffenberger was the artist. Just go back a couple of weeks to Pappy’s #1943, and see the lead story from that issue, which was drawn by Schaffenberger, then compare. I am not sure who drew this Captain Marvel Jr story, but it wasn’t Schaffenberger. 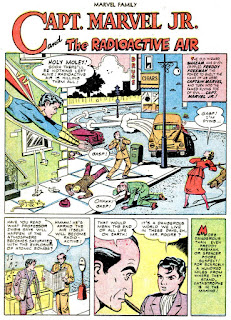 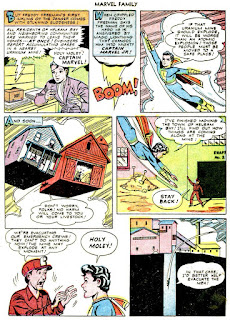 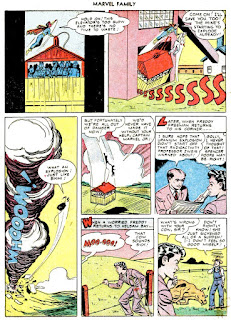 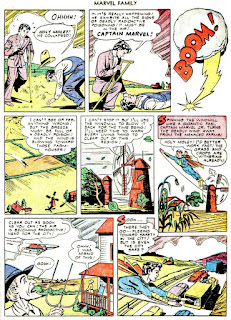 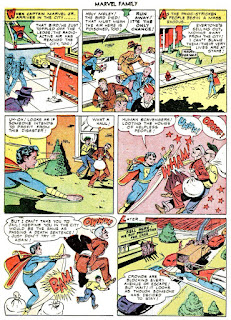 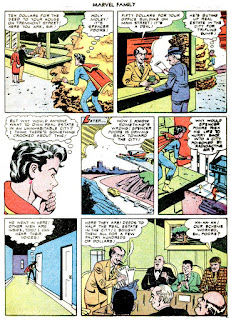 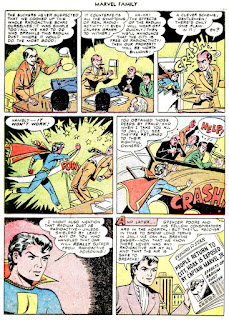 The villanous scheme reminded me of the sort of thing that Carl Barks would have invented, displaying an intuition for and interest in economic forces.

(In real life, a problem for a would-be schemers would be the suspiciousness ex post of concentrated purchases, given quickly vanished radioactivity.)

From a sociological perspective, this story is interesting as an artefact of changing awareness and attitudes towards radioactivity. Shortly after this story was published, the US began detonating nuclear weapons in Nevada, sometimes with large numbers of conscripts deliberately positioned near the blast zones, and generally up-wind from civilian populations.

As to the Marvels, my suggestion is that Mary and Freddie wear civvies sometimes, but stay Marvels always.

Daniel, this is one of those "child-level" stories that they did so well in the Marvel Family series. The crooks pull off a con game, but it isn't anything that someone who was mature could not see through. I originally wanted to call this a "simpleton plot" because if it were happening to you you would have to be a simpleton to believe it. Based on that I think Fawcett saw its Marvel Family readers at about ages 9 to 12, to whom a plot like this might seem perfectly reasonable. I admit it was you bringing up Carl Barks that made me see it.

Coincidentally, Mrs Pappy and I were talking the other day about financial matters. We weren't arguing (futile, so we don't), but discussing our personal differences regarding our incomes. She likes to spend hers and keep the money rolling through the economy, I like to save as much of mine as I can for rainy day funds. As I mentioned to her, I got my lessons in frugality from reading Uncle Scrooge stories by Barks.

There would have been great story potential in a tale about one or all of the Marvel Family deciding to stay in super-powered form all the time -- for purely altruistic and unselfish motives, of course! -- only to discover by story's end some reason that it wasn't really a very good idea after all.

As for the kids deciding to stay Marvels for less altruistic and more selfish motives (Freddy being able to lose the crutch, for example!) remember that if they were the sort of kids who would do that sort of thing, Shazam wouldn't have given them the power in the first place. And the old wizard has ways of punishing misbehavior, and could revoke those powers if he thought they were being misused.

P.S.: I imagine that Freddie would be the most tempted, and Mary the least inclined to stay a Marvel full time.

I concur with your Schaffenberger guess.

Maybe Mary could have stayed in Marvel mode and just change clothes, but not Billy.

At AC Comics, Rik Levin answered the question of why Nancy Arazello didn't just stay in her Dragonfly form permanently. The longer she stayed in that form, the more tenuous her connection became to her real body and the more strength she lost.
Thanks!
P.S. Have you seen the 1953 film "The Magnetic Monster"? That's what I thought we were going to see, based on the panel you used for the preview. In the film, detectives have to track down a man who is making others sick due to his radioactive contamination.

Richard, well, there you go...Shazam is a god of sorts (or someone who dispenses the powers of gods), and would probably have rules for those upon whom he had dispensed godlike powers.

On the other hand, I thought Clark Kent was superfluous to the existence of the godlike Superman. He did not need the Kent identity; it complicated his life, and made him more mortal. Just writing that line made me think that could be why he kept his secret identity.

Darci, perhaps in the dim past of my childhood I could have seen the Magnetic Monster. Saturday mornings in the mid-fifties were spent at a local theater watching a feature film (usually science fiction, monster, or an Abbott and Costello or Martin and Lewis movie, plus several cartoons) and it sounds familiar.