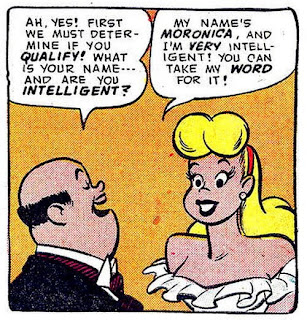 
Owen Fitzgerald was an animator, first with Disney, then Fleischer Brothers, then went into comic book work with the Sangor (ACG) shop. At some point he went to DC and did Adventures Of Bob Hope comics (a very well done comic book, by the way, in both writing and art), then at another point replaced Al Wiseman as the artist on the Dennis the Menace comic books. Fitzgerald died in 1994.

Bob Wick (Wickersham) was also an animator/comic book artist, and did excellent work for ACG, including the wonderful Kilroys comic book. These two stories, Moronica by Fitzgerald and Our Kid Sister by "Bob Wick", appeared in The Kilroys #28, from 1951. As a character Moronica is more from the My Friend Irma mold, and sixty years later, dumb blonde jokes are still funny. As for Sis, she's a normal teenager, easily distracted in her own little world.

Something I really like about Fitzgerald's artwork is economy of line. He doesn't have any more lines in his drawings than what needs to be shown. His inking is beautiful. He made it look easy, which as we all know, means it isn't easy at all.

Wickersham's Kid Sister is in motion all the time; I love the sequence in the chair while she talks on the phone. I also like that she wants to save her comic books when she thinks the house is on fire. Personally, I would have gone for the comics first, records second (records being more easily replaced than comic books), but everyone has their priorities. She'd even try to save her pictures of Van Johnson. Like I said, ditsy. 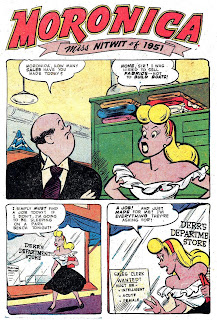 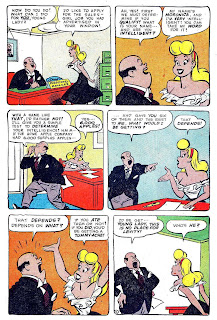 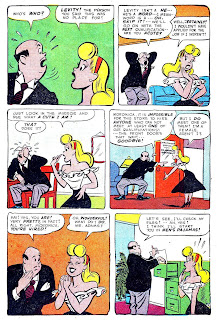 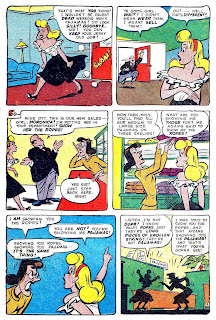 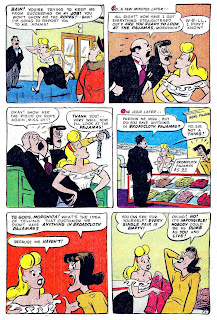 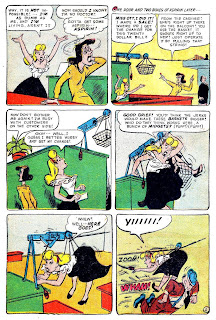 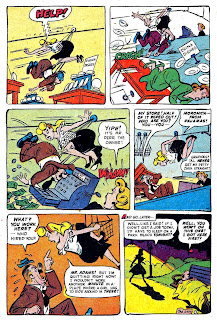 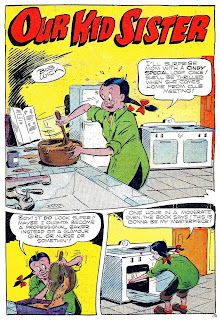 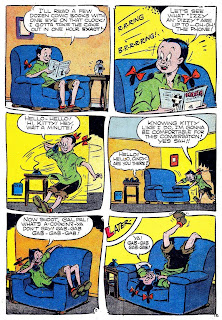 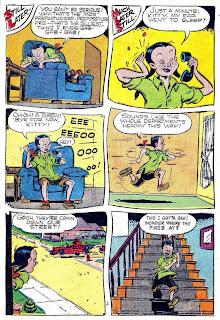 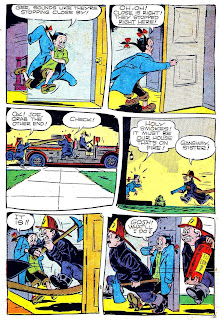 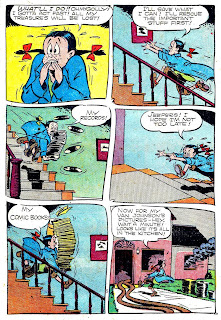 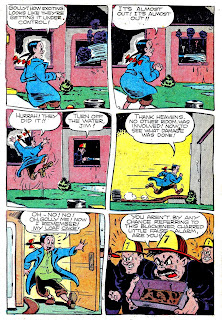 Yes, both of these stories showcase some superb cartooning and motion. I especially see the animation carrying over in the first story. The characters in Moronica have poses that are in-between poses between movements. The salesman and Moronica are definitely in motion in those panels. Incredible stuff. thanks for sharing these.

HEH, John K. has several posts about Fitzgerald. I found this one particularly interesting for aspiring cartoonists.

I literally almost ran that MORONICA story last week myself but this time went with something else!

Pappy, thanks for the John K. link. That's fascinating analysis of Fitzgerald's storytelling ability.
I've just arrived back from 6 days in Yosemite and I see you've posted more fantastic posts. I'm off to see them in detail! Glad to be back!