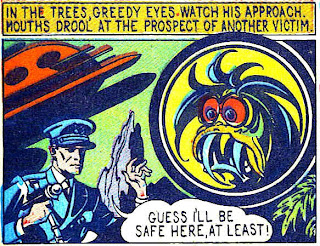 Number 853
Interplanetary mailman meets the Tough-tails
This is a good story to follow up Monday's Basil Wolverton "Spacehawk." I've been wanting to share this story with you for a long time. The artwork is unique, stylized. It's credited to Munson Paddock and is so far the only example of Paddock's work I've seen. It's from Speed Comics #9, 1940. When looking at this frenetic tale "speed" seems the operative word.
It's another story where the rights of an indigenous society are ignored and the idea of white people taking what they want is taken for granted. The closest thing I can liken it to is the sort of craziness from Fletcher Hanks, only better drawn. Mars Mason himself isn't a Flash Gordon or typical comic book space adventurer type. He's an "interplanetary mailman"!
Paddock had a familiarity with design, geometric shapes, and art deco. According to Lambiek.net Paddock, who worked under several pseudonyms including Cecelia Munson and Lyle Ford, was born in 1886, and was another of those old-time artists who joined in the comic book revolution early in the history of the industry, but well into his own career. He died in 1970. 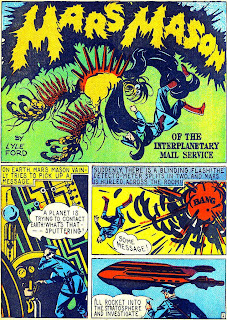 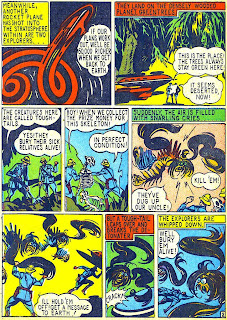 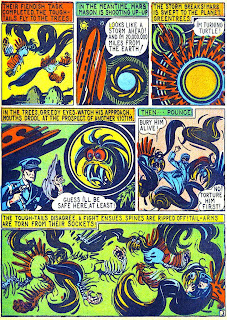 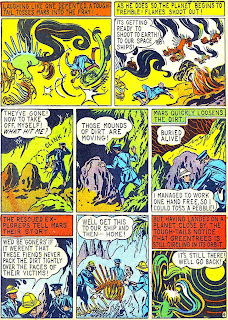 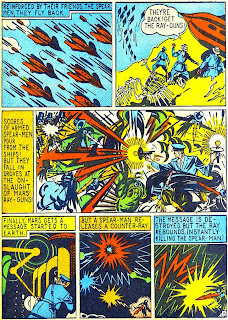 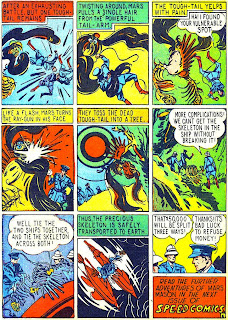 WOW! I am blown away, Pappy. You can really feel the motion and impact in his drawings...I think I have a new hero to watch out for.

I bet people would still complain about the price of stamps though.

Too wonderfully weird! I ran this same story on my FOUR COLOR SHADOWS blog back in August to good reaction!

I guess I missed it when you ran it, Steve...these things happen. Sorry. But if it's good once it's good again.

Wasn't complaining a bit, sir. It's all good! When I see things like this that I've seen elsewhere I look at it as reruns on another channel where someone else who might have missed it the first time can discover it's wacky goodness!

Good on you, Steve. We do these blogs to share the wealth of comics, because there isn't any other kind of wealth to be had in blogging. (Or if there is, I haven't found it.)

This really is an eye opener of a yarn Pappy... you got more by this Paddock guy I want to see it!

Wow - it's like Fletcher Hanks dropped acid and got more generous with the ink!

Fantastic work - thanks for posting!

I wish I had more Paddock. Maybe I'll find some in the future. I'm always surprised when a posting gets a lot of response. A nice surprise, that is.

Karswell, your t-shirt is a chick magnet. I have to fight them off. But I don't fight too hard...I'm old and my fists have the punching power of warm oatmeal.