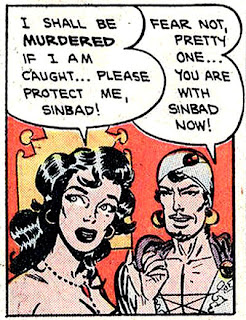 
Joe Kubert's 1950 St. John comic, Son of Sinbad, was a one-issue wonder. In other words, I wonder if it was intended to be a series, but it didn't sell, or just a one-shot. No telling now, unless Joe tells us. 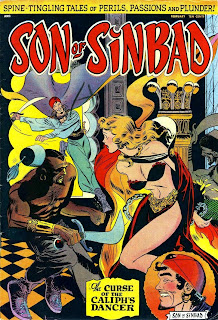 This story looks something like the Hollywood Technicolor™ version of a fantasy Arabia, with beautiful girls in bras, and guys with turbans and pointy shoes. Think back to Rock Hudson or Tony Curtis as the romantic leading man. (And did Curtis actually say, "Yonda stands the castle of my fatha, the caliph" in a movie?) Think Rhonda Fleming or Debra Paget as the romantic female lead. All good Arabs, Hollywood-style.

Since Christmas is in five days and I haven't given you any Christmas stories this year I've included a Fleer's Dubble Bubble ad with Pud and the gang trimming the Christmas tree with bubble gum. (Is there no end to the Pud Posse's inventiveness when it comes to uses for bubble gum?) 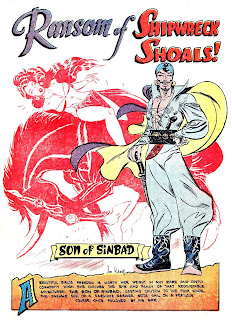 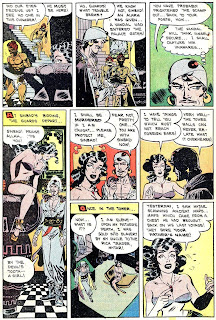 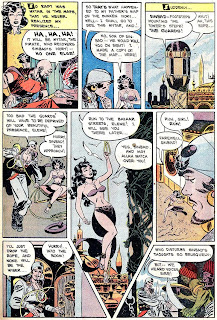 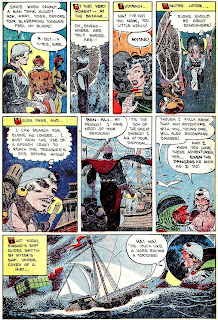 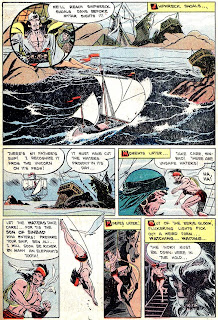 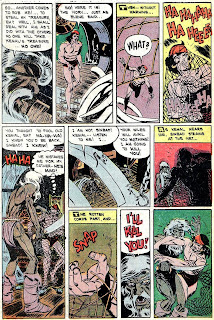 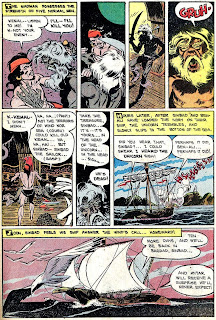 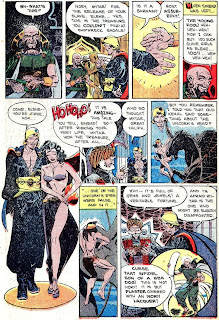 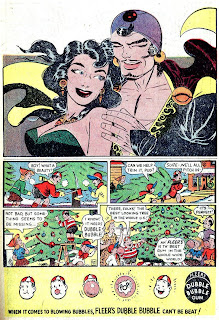 Lovely Kubert art! Some of the background details and faces remind me of Ditko, but Kubert mostly inked his own work, didn't he?

Kip, as far as I know Kubert inked his own.

Love the last panel, Pappy, just above the ad for "dubba bubba" (as we used to call it as kids).

...reminds me a bit of my mate Hayley's beloved Russell Brand, the English 'fop' comedian/actor who recently married your Katy Perry.

Howard Hughes produced a "Son of Sinbad" film, starring Dale Robertson (as the son), Vincent Price (as Omar Khayyam), Leon Askin (as the Khalif), Sally Forrest (as Ameer), and Lili St. Cyr (as Nerissa) (plus a cast of 40+ women). I saw it on TCM, but I don't recall it well enough to say this was an adaptation of the story. Apparently it was made in 1953 but not released for years due to conflicts with the MPPC.

"Son of Sinbad" (the movie) probably has little or nothing to do with the comic. It's a good alliteration, and the title seems a natural.

Borky, "your" Katy Perry...? I guess I'm so OOI (out of it, pronounced "oo-ee") that I had to look up Katy online. I'd claim her for myself, but as you say, she's already taken.

Well, that makes sense. I could see Ditko taking notes on this one, though. "Great background details! I should try something like that."