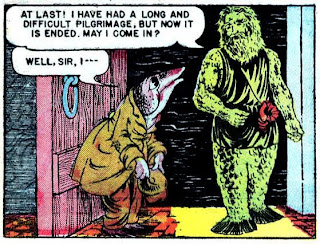 Number 859
Many happy returns of the spray
Here's story two from EC Comics' Land Of The Lost #1, 1946. For those of you who know EC only as the publisher of the best horror and science fiction comics ever, it was quite a different company when Maxwell Charles ("Charlie") Gaines founded it after selling out his All American Comics line to DC toward the end of World War II. Gaines had an idea that EC could stand for Educational Comics, and to this end he published several comics for young readers. Land Of The Lost was an adaptation of a popular radio show, written by the program's creator, Isabel Manning Hewson, and drawn by illustrator Olive Bailey.
I told more of the story in Pappy's # 706.
What pleased me most when reading this story was the wordplay. I also noticed that the character Triton looked familiar. I'm sure that when the artwork for this story was turned in, Charlie Gaines could not have guessed that his son and heir, future Mad publisher Bill Gaines, would one day look a lot like Triton. 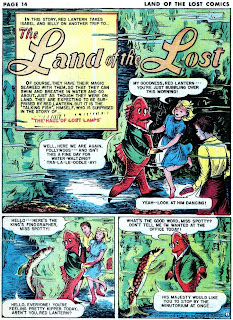 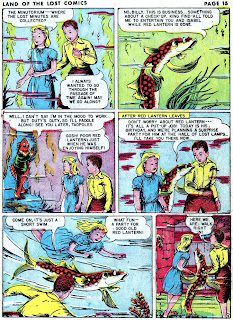 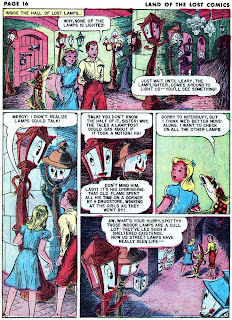 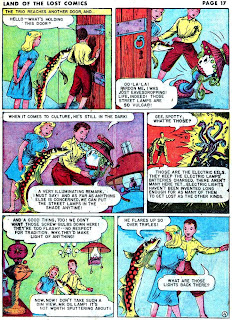 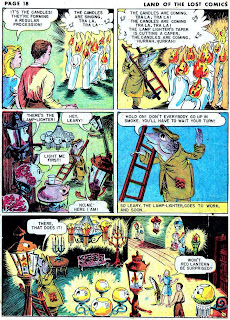 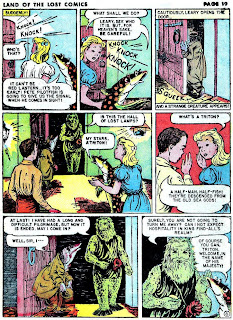 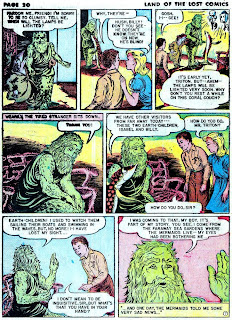 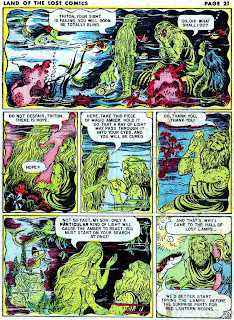 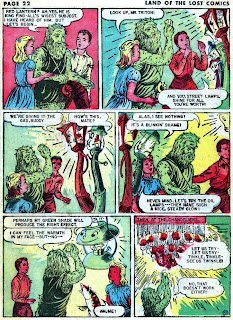 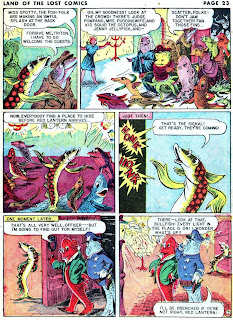 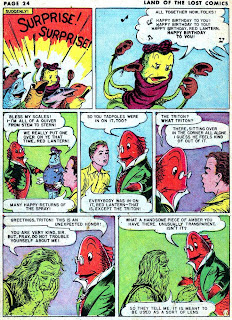 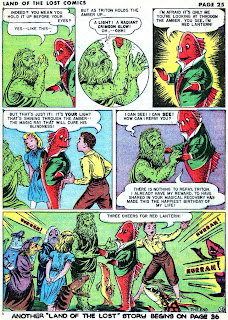 Thanks, Pappy. I love LotL, not just because it's so sincere and sweet but Olive Bailey's work is so fluid, so clean and crisp and yet intricate. An underrated talent.

You're right, the word play is great, but how about Triton's dialog? When he talks about once watching the "earth children" swimming and sailing, it's pretty damn sad.

Another show that started on radio! And who knew it was an EC? I found out a couple of years back that "Green Acres" had been "Granby's Green Acres" in an earlier life.

Thanks for the peek at pre-Bill ECs. I'll be poking through the archives to see more samples.

Thanx for sharing Pappy~! Never saw this one before but knew of its existence. Wonderful illustrations through the comic book looking glass~!

Famous (Paramount) Studios made a couple of cartoons based on the radio show: "Land of the Lost" and "Land of Lost Watches."

rnigma, are those animated versions of LOTL available on DVD?

Hewson wrote a LAND OF THE LOST story as early as 1933, altho where it appeared, I don't know. She attempted to sue NBC and the Kroffts in 1974 for their LAND OF THE LOST, but she lost. One of the animators on the Paramount series was Larry Riley. I wrote about him here.

Bhob, by 1974 Hewson's Land Of The Lost would have been off the air for a long time, and I can't imagine she'd have any basis for a lawsuit. It's my understanding that titles can't be copyrighted unless they would cause confusion in a consumer's mind, or unless they've been trademarked. Am I correct in believing that?

As an example, I remember in the early '60s when Charlton put out the comic book Jungle Tales of Tarzan. The book was in public domain, but Tarzan was/is a trademark of ERB, Inc., and Charlton had to stop publishing.

Yes, titles can't be copyrighted, as evident with the many books sharing the same title.

I'm curious to know if the LotL comic book stories were the same as the radio scripts. Seems like they must have been, but comparing, I don't see any duplicate titles.

Btw, one of the actors who portrayed Red Lantern was Art Carney.