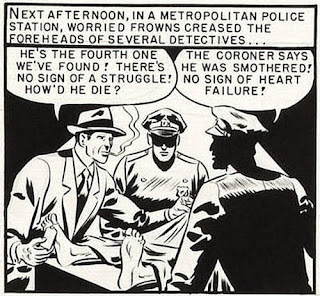 
War Against Crime! #11 was the last issue of that title. With the next issue it became Vault of Horror. This last issue of WAC featured the second story hosted by the Vault Keeper, and EC's first horror cover. Those must've been heady days at EC when they saw their circulation jump as they moved into horror.

I could've shown you the Vault Keeper's story from this 1949 last issue of WAC, "The Mummy's Curse," but I'm contrary and want to show you story number two from that issue because I have the original art scans I purloined some years ago from Heritage Auctions, and because of the confusion over the artist of "Bed of Murder." When I showed some panels from this artwork in Pappy's #351 I identified it as being by Harry Harrison, because that was the credit I'd seen elsewhere. In Russ Cochran's reprint of WAC #11 the credit for the artwork is given to John Alton.

John...who? To paraphrase sportscaster Dick Vitale, "Let's go to the internet!" I found that John Alton was a Canadian artist who had worked for Bell Syndicate in Canada, and had done some jobs in the States after the Canadian comic industry crashed. Credits for Alton are scarce over the years, and after a time they disappear. I find Alton's style very clean, no white-out and no patches. There's nothing exceptionally dynamic about his artwork but Alton was obviously a professional and his style seems perfect for the late '40s crime comics.

Tomorrow is a non-EC posting, then I'll come back on Friday with a couple of EC love tales. 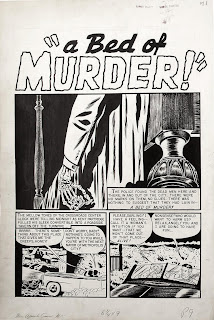 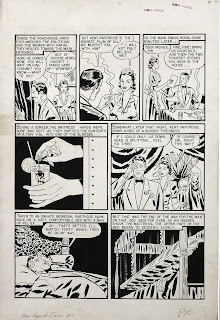 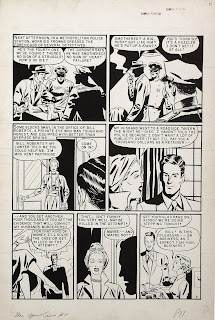 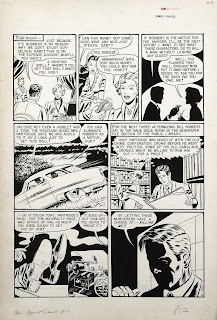 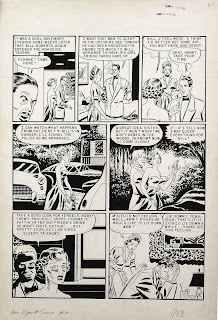 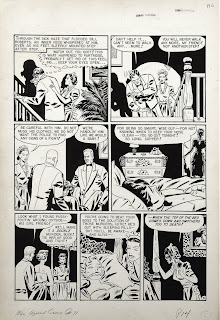 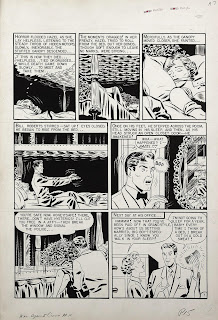 Well, the coherence of the story collapsed with the fourth panel of page three — what did she do, drag the body from the tavern? — but it's interesting to see yet another tale derived from “A Terribly Strange Bed”.

Oeconomist, thanks for the link to the Collins story.

The olden crime stories from the late '40s just can not be matched by anything since. The simpler times allowed for a starker contrast between the good and bad in society.