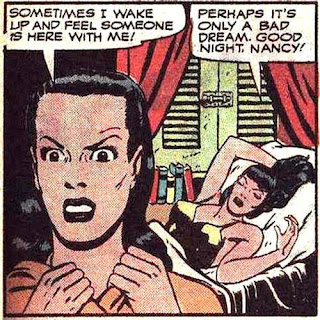 
The man who came to stay


Ralph Mayo was a very talented artist who worked for various comic book companies in the 1940s and '50s. According to Al Williamson in the book Hidden Lands, Mayo had lost his apartment when comic book work was hard to get in the 1950s. Williamson took him in to his home, where Mayo slept on a cot. Mayo helped Al by collaborating with him on several jobs for Stan Lee, including Jann of the Jungle. Mayo got on his feet, got a room, and then one day didn't show up at Williamson's studio. Mayo, a young man in his mid-forties, had died in his sleep.

Williamson said Mayo was from the UK, had sailed from England to the States in 1940, and when he put in his papers for citizenship something went amiss. He said to hell with it and just never left the U.S.

Most recently I showed Mayo's work on a Johnny Quick story from DC.

This story, "The Phantom of Marco's Villa," is a short supernatural story from St. John's Authentic Police Cases #5, 1948. You can see Mayo's skill at drawing women, which came in handy for his stint on jungle girl comics like Jann. 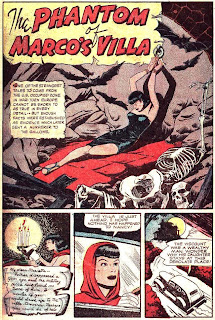 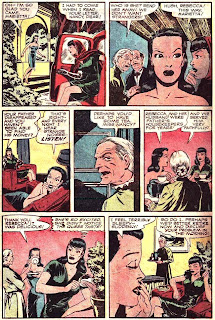 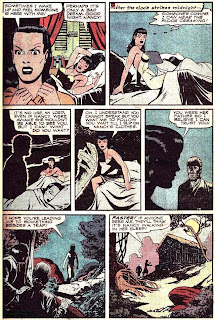 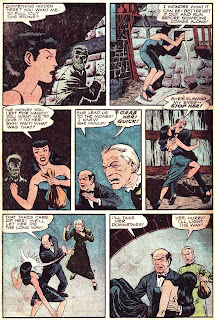 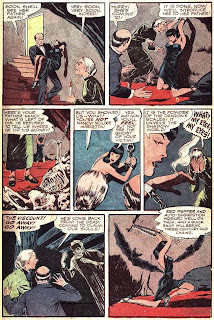 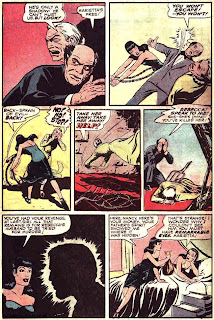 Hey, man! Don't hold the Mayo. I really liked this one, Pappy.

I admit I haven't been real familiar with Mayo's work. Besides what I've shown I've seen it on a teenage strip, Kathy, but not much else. I'd like to see more and maybe someone can direct me.

What a sad story about Mayo and one more warm story about Al Williamson. Is there a nicer guy in comics than Williamson? The "nice guy" stories about Williamson are legion. I always love hearing him talk in interviews, how self-effacing he always seems, eager to heap praise on colleagues. His success, if you listen to him tell, is due to the wonderful inkers he’s worked with who turned his meager penciling efforts into something worthwhile! -- Mykal

whoa! i hear strange noises at night too, can that nice, crime-fighting lady come over?...

I'd like to say something about the way women were drawn in the 1940s and '50s. Then, as now, any woman under 30 was portrayed as being uniformly beautiful and uniformly sexy. But back then it was a realistic sexy. The proportions were realistic. I don't look at current comic books much, but whenever I do, I notice that the average woman's breasts are much too large in relation to the flatness of her stomach, and the stomach is much too flat in relation to size of the hips and curves of the legs. I think the cartoonists of old just had a better sense of what was anatomically possible.

Of course, they lived before breast implants and liposuction, so maybe that had something to do with it.