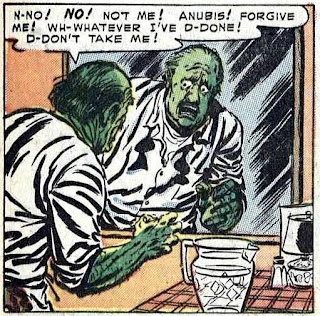 Number 695
Vengeance of Anubis
I first noticed artist Bill Ely's work on Rip Hunter, Time Master in the 1960s. At the time he was one of the few DC artists to sign his name on his artwork.
Ely goes back to the 1930s as a comic book artist. He worked a lot for DC on several features, but his work showed up at several other companies, also.
The first two short stories I have here of Ely's are from DC's House of Mystery, #'s 13 and 17 respectively, from 1953. The third is from 1948, the back-up feature from Dell Comics' Dick Tracy Monthly. I don't know how long Ely did the strip, but it's obviously not Marvel Comics' . This is an undercover cop who dresses like a bum and then busts the criminals he runs into...usually with his fists.
Of the three the Anubis story is my favorite. A diner owner (!) is a secret Egyptian-god cultist. He goes after some musical hep kats who are intruding on his ability to practice his religion.
Ely is another of the comic book journeymen I like to talk about. A true professional with an attractive style. Why isn't he better known amongst comics fans? 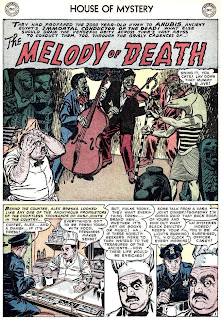 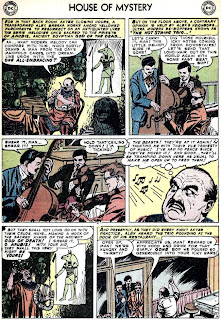 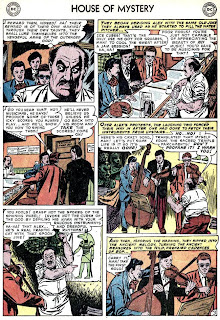 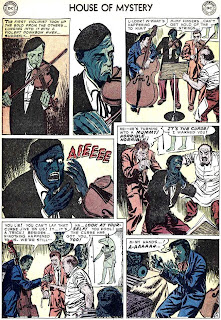 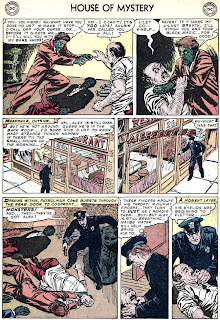 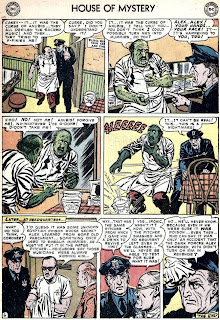 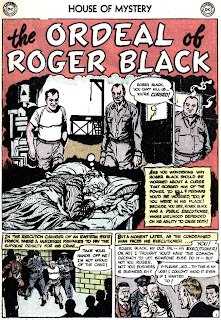 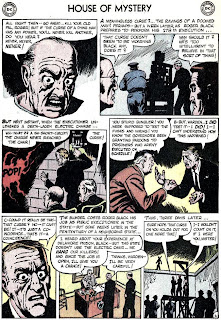 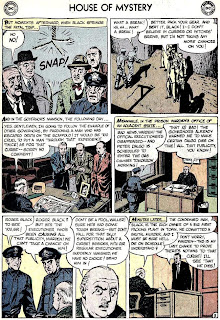 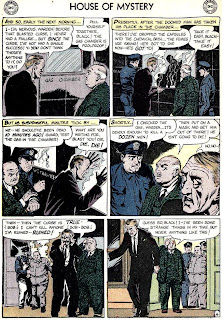 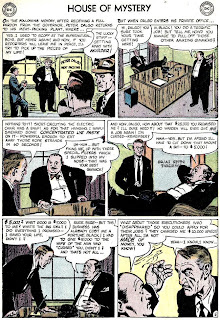 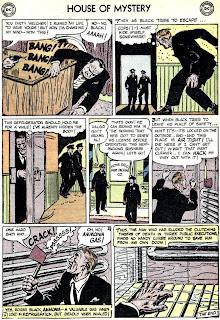 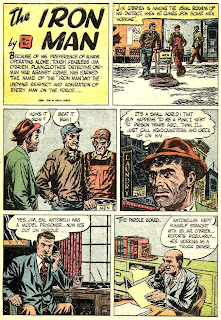 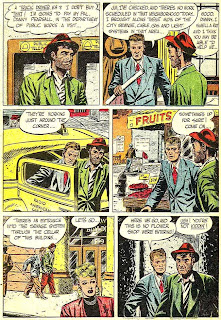 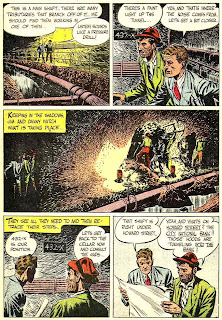 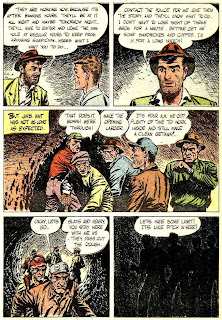 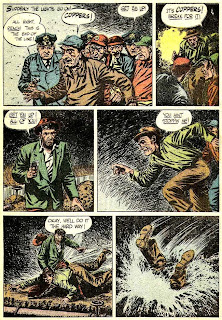 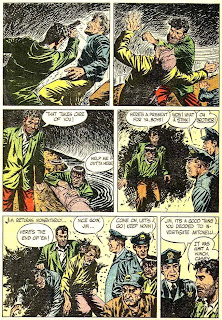 Pappy: I think this master isn't better known because he doesn't draw men in tights. I shouldn't talk too loud, I wasn't familiar with his work before your post.

Simply amazing - that first story belongs in a time capsule. Just staggering execution from panel to panel, and very scary! Only one comment - I didn't know hard bop outfits normally were so string-based. Two violins and a cello? Smear it, Man!

Oh, by the way, Pappy. I have a new blog: http://www.bloodypulptales.com/

Mykal, your Eerie publications blog is needed to show readers just how off-the-wall that company was. A good biography of this brilliant businessman who made his empire selling sleaze and exploitation is done by my old friend, Tom Brinkmann here.

I have a Matt Baker story called "Shelf of Skulls," reprinted from Ajax-Farrell's Voodoo #1 in Eerie Publications Terror Tales Vol. 1 No. 8, coming up on April 28. Yes, I try to work at least a month and a half, if not two months, ahead. As I write this Pappy's is scheduled through May 2.

This is a time for a disclaimer. With the proliferation of blogs out there now scanning comics and posting them, it's hard not to be treading on each others' toes and in each others' chosen specialties. Heretofore I've gone through other blogs just hoping they hadn't beaten me to the punch with something I had planned to post, or that we weren't posting the same thing on any given day. I just don't have the time; I read other blogs and I'm interested in what everyone is doing, but mine keeps me busy and I don't look in on other blogs every day.

So from now on, if what I described above happens and another blogger is doing something similar to me, then it's a coincidence. I'm not swiping from anybody, honest. I go about my business and leave others to theirs. So don't write me and tell me Joe Schmo already posted the same story two weeks ago. We're all drawing from the same source and invariably crossovers will occur.

Pappy: Thanks for the support. It means a lot.

Small world - I have contacted Tom Brinkman in an effort to reach Jeff Goodman about using one of his photographs on the blog. Mr. Brinkman was kind enough to pass my email along to Goodman, who allowed use of the photograph of the astonishing Myron Fass that appears on my blog now. As for Tom's book, I have investigating getting a copy (I want one bad), but it has become quite expensive (129 bucks for cheapest copy Amazon).

I'll steer clear of the Baker story, and I know what you mean about crossover. Before starting this blog I contacted Karswell (The Horrors Of It All) for fear of stepping to close to his turf. He was, of course, cool with it and supportive (love that guy). For my part, I try not to worry too much about cross-posting. I try to hit the niche markets, and stay very tightly to my parameters. I only do comics I have in my possession, never swipe a scan. I try to avoid doubling up with the many comic blogs I follow, but if things get doubled up my attitude is, well, I certainly didn't plan it and I never use anyone else's scans and don't even use the sites that offer comic downloads. All scans come from my comics. I post 'em as I sees 'em and it’s all about sharing great comics anyway.

Love your blog, Pappy. Pappy's Golden Age is always the gold standard for which there really is no competition!

I appreciate your contributions; my disclaimer was meant for my readers in general, because I know you're someone who goes out of his way to be accommodating.

I have used the anonymously produced comic scans available on the Internet and should probably clarify at times when I'm using someone else's scans or my own, but what the hell...it's what you said about sharing great comics, or in my case, sharing comics that might not be so great, or might not be seen except for my quirky tastes.

Going back to your original comment about not knowing of Bill Ely, it's one of the reasons I love doing this blog, and something I never thought about before starting it: There were a lot of great, good or merely competent artists and cartoonists during the Golden Age, and not all of them are remembered like the top guys (and we all know who they are). I think it's good to look at the work of someone not so well known, especially someone as good but underappreciated as Ely, whose name would generally evoke a "Who?" response from comic book fans, but who was a solid professional. If I were to compare Ely to any other artist it would probably be George Evans, who also drew very expressive eyes.

Wow!I hadn't seen the Evans comparison, but the minute you said it, BANG! I have to admit, I had never heard of Bill Ely, but clearly, I should have. I can't tell you the number of times I have seen an artist on this blog, or Karswell's, or Lysdexicuss' (or many others), that I have never seen or heard of. I thought I knew comics, but really, I have huge, huge gaps. That's why I love this new digital sharing. It has sparked my interest to find more (and purchase more) from many great comic book masters. It's awesome! -- Mykal

Pappy,
As usual, wonderful post!
I too had never heard of Ely before, and I am impressed with these stories very much!

As one of those many newer comics bloggers, I agree completely with you and Mykal, and I can't tell you how many times I have scanned and cleaned up a comic story only to find it was posted somewhere else already! Sometimes within hours! I don't think inadvertant duplicate story posts are necessarily bad at all, and as we also have discussed before, a great story is always going to be a great story, no matter who posts it or how many times. I personally feel, the story can be duped, no problem, it's the personal commentary provided by the one posting, his or hers personal insights and reflections on that particular story, that eventually becomes unique to each persons blog (this isn't the case in blogs where people only post comics but no personal commentary).

You, Mykal and myself may, theoretically, post the same story on the same day, but if we each bring something new and original as to how we have been affected by the story or have different takes on the art, or whatever, that doesn't bother me at all, and I hope most comics bloggers can exist in that kind of environment. The fact is, most of us have great respect for each other, as you know. I also would never want to step on someone elses personal space, or toes. And when it does happen, as it is bound to, just link up the other fella's post as well and say, 'Joe schmoe' also posted this - go look!
Thanks Pappy!
Your blog is the original and the best!! We are all imitations of you in some way or another!

Speaking as somebody who doesn't do a comics blog (I just like reading 'em), I don't think crossovers are anything to get stressed out about. Do you have any idea how many people post the same funny flicker photos or YouTube video?

As someone who's appreciated comic art all my life, often to puzzlement of many of my peers, I'm just amazed that there's so many others that do, too. A good reason to keep the
Internet around.

OK, guys...I appreciate and respect your input on our output.

We'll all just keep up the good work. This will be known someday as the Golden Age of Comic Book Scanblogs!

I'm a Ely fan from way back (like, the '60s!) but I had NO idea that he did anything like the Ironman noir piece. Thanks for the eye-opener.

It's such a departure from the Ely I'm familiar with. Gee, I'd love to see more of the Harvey Ironman. Maybe someone will post some more. Here's hoping.