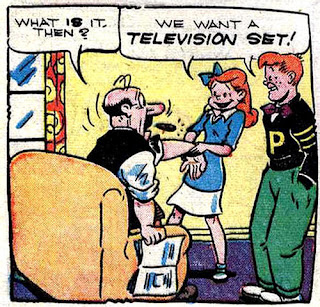 Number 694
The new TV
This funny story from The Kilroys #13 reminds me of the first TV set my dad and mom bought in 1950. As the character, Natch, says to his dad, "They don't cost so much. Only about four or five hundred." I'm not sure how much that would be in 2010 dollars, but probably a few thousand at least. Some people were willing to pay exorbitantly to get in on the new technology. In other words, things haven't changed a bit! You iPad buyers know that.
Like most new technology, the curious stood back and watched as people who had to have it bought a television. Just as in the story they'd invite themselves over to watch. My dad and mom, who nobody ever just dropped in on, solved the problem. Dad put up the aerial in the attic. We got great reception, but no one in the neighborhood knew we had a set.
I'll be getting into The Kilroys more in the future. I think it was a great comic, well illustrated by Bob Wickersham, and script credit given at times for Hubie Karp. There aren't any credits on this 1948 story, but whoever wrote it was in touch with the social phenom of the postwar era, the neighborhood television 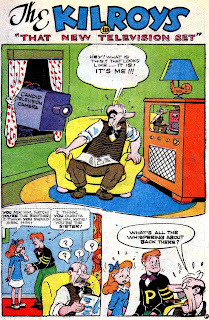 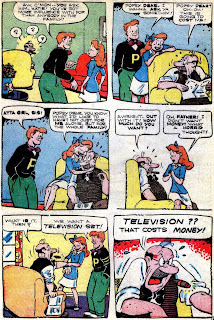 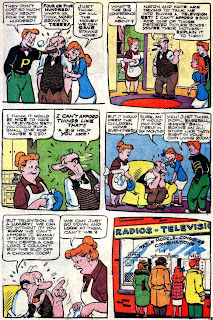 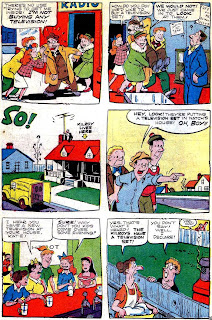 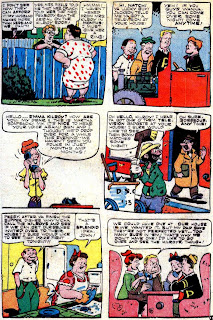 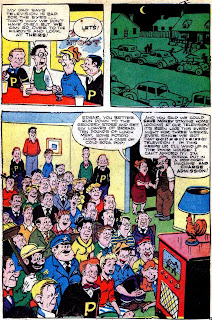 **********
Here's where artists get their inspiration (swipes). Al Hartley did these "Kollege Kapers" from this issue of The Kilroys in 1948. The Barbasol ad had appeared in Life magazine a year earlier. 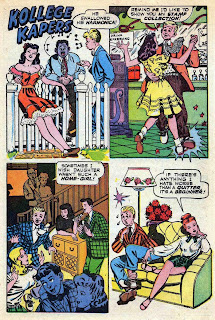 I recently happened on to a stack of "Kilroy" comics and am eager to drink it all in. This was a brand of comic book humor that I hadn't before been exposed to.

Thanks for giving us a little creative insight into this overlooked classic!

Well, there's some degree of absurdity in comparing over-all prices for economies as different as those of America in 1950 and of America in 2010; but the conventional figure would be about 9½ times as great in the latter. ($4750 television set.)

And, as well as just price inflation itself, one should consider that real wealth is greater now. It might be better to multiply the $500 by the ratio of to-day's per capita nominal GDP to that of 1950. That ratio is about 31½. ($15,750 television set.)

Fascinating statistics from oeconomist! Yikes! I think I'll save my money and listen to the radio, those TV's are a bit pricey! It's almost time for Inner Sanctum...

Bob Wickersham was a great artist, cartoonist, animator/director. I am familiar with a lot of his work but I haven't seen much of the Kilroys. Looking forward to more posts like this.

Thanks, Pappy!
What an amazing blog!

Oeconomist, thanks for pointing out what the real cost would be in today's $$$. My dad was the sole earner in the family and in 1950 earned $150 a week; he had a mortgage, a wife and two kids. To buy a TV was a real big deal,
but we kept that old RCA until 1962, so we got our money's worth.

My brother says, "We were part of an experiment to see if children could be raised solely by television, without any parental guidance whatsoever."